NOTTINGHAM is the cheapest city for London commuters to buy a home where property costs a third of the price – and it's less than a two-hour train ride away.

Record numbers of Londoners are ditching the capital in search of affordable housing, but now that similar prices can be found in the South East, buyers are looking even further out for their first home. 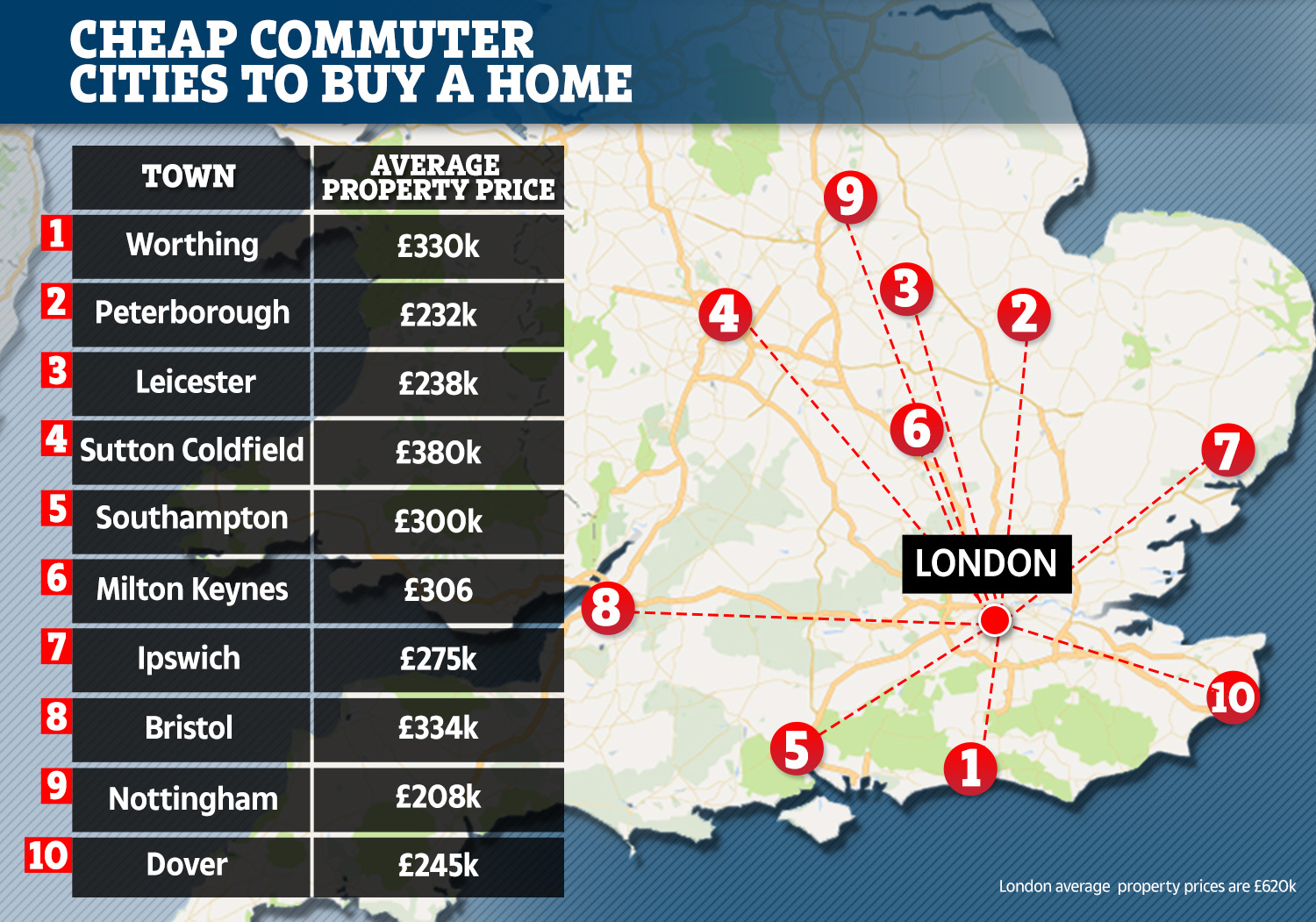 Using Zoopla's commuting calculator, we've come up with a selection of cities that are less than two hours away from central London on the train and where average house prices are under £400,000.

This could help you save up hundreds of thousands of pounds when buying a home and still be in work for 9am.

Nottingham may be 130miles away from London but it only takes one hour and 51 minutes to get there by train. 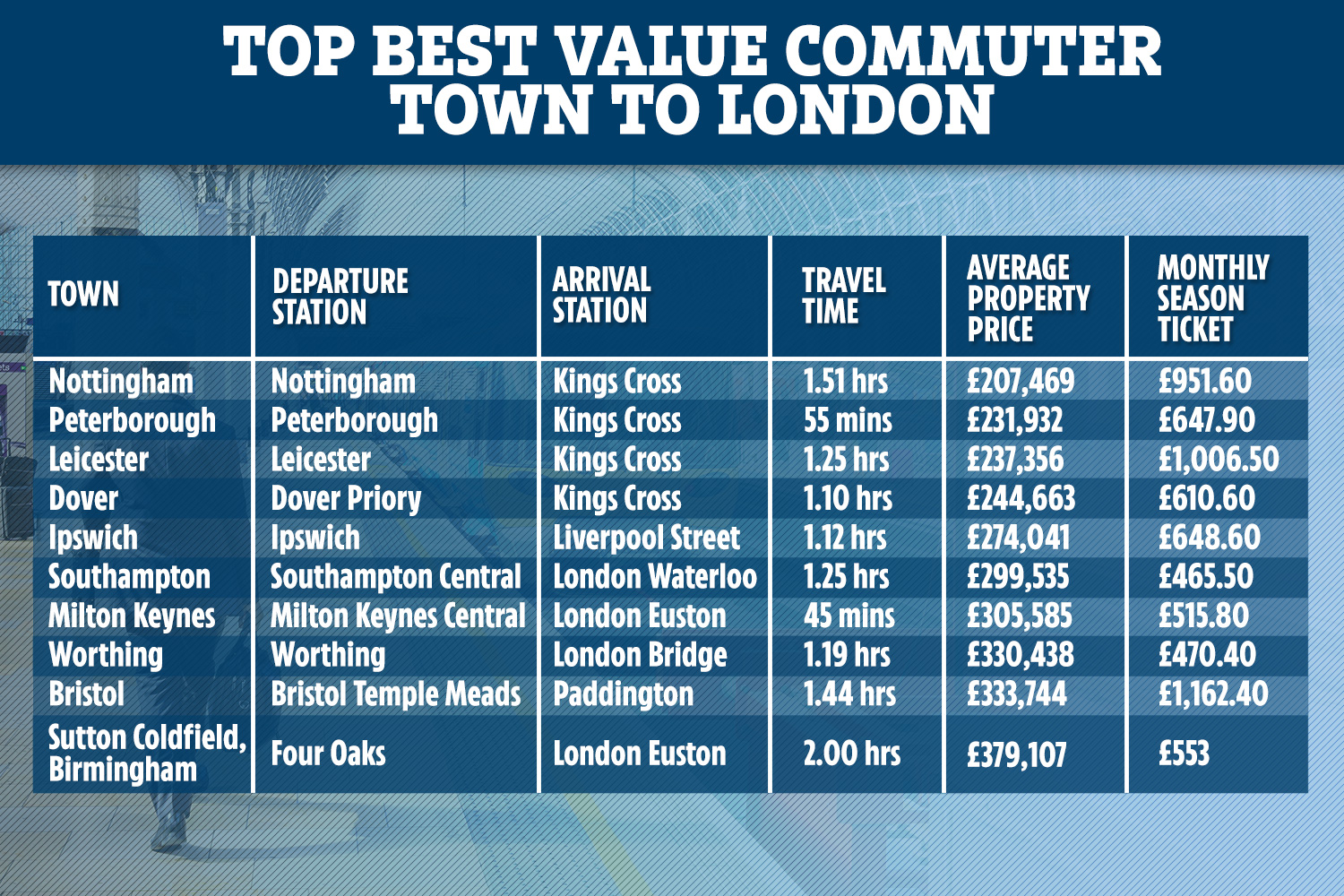 House prices cost around £207,469 so you'll be saving almost £412,000 on getting on the property ladder by moving to the Midlands.

Of course, you'll need to take into account the cost of a train ticket which will add another £952 a month to your bills.

Property prices in Peterbrough are the second cheapest at £231,932 on average and it takes less than an hour to get to Kings Cross station.

Commuters from Milton Keynes have the shortest journey of around 60miles which only takes 45minutes.

It's the closest town or city to London but house prices here cost £305,585 on average – over half of what they are in the capital.

What help is out there for first-time buyers?

GETTING on the property ladder can feel like a daunting task but there are schemes out there to help first-time buyers have their own home.

Help to Buy Isa – It's a tax-free savings account where for every £200 you save, the Government will add an extra £50. But there's a maximum limit of £3,000 which is paid to your solicitor when you move.

Help to Buy equity loan – The Government will lend you up to 20 per cent of the home's value – or 40 per cent in London – after you've put down a five per cent deposit. The loan is on top of a normal mortgage but it can only be used to buy a new build property.

Lifetime Isa – This is another Government scheme that gives anyone aged 18 to 39 the chance to save tax-free and get a bonus of up to £32,000 towards their first home. You can save up to £4,000 a year and the Government will add 25 per cent on top.

"First dibs" in London – London Mayor Sadiq Khan is working on a scheme that will restrict sales of all new-build homes in the capital up to £350,000 to UK buyers for three months before any overseas marketing can take place.

Starter Home Initiative – A Government scheme that will see 200,000 new-build homes in England sold to first-time buyers with a 20 per cent discount by 2020. To receive updates on the progress of these homes you can register your interest on the Starter Homes website.

Buyers in Worthing, East Sussex, face the smallest travel costs, where a monthly train tickets costs £470.40 compared to those in Bristol who have to fork out over £1,000 a month.

It takes the longest to travel to the office from Sutton Coldfield, which is just outside Birmingham, at two hours.

House prices aren't the cheapest here either, at an average of £379,107, they're more than £171,000 more expensive than Nottingham properties.

Now could also be a good time to invest in property outside the South of England where house price growth is slowing creeping upwards.

Annabel Dixon, consumer spokesperson from Zoopla said that there is more is more opportunity for cimmuters if they're prepared to look " a little further afield".

She added: "As always, the devil is in the detail and it's not just the availability of homes for sale and average house prices that count.

"First-time buyers need to factor in the cost of a season ticket as well as the logistics of longer journey around things like family." 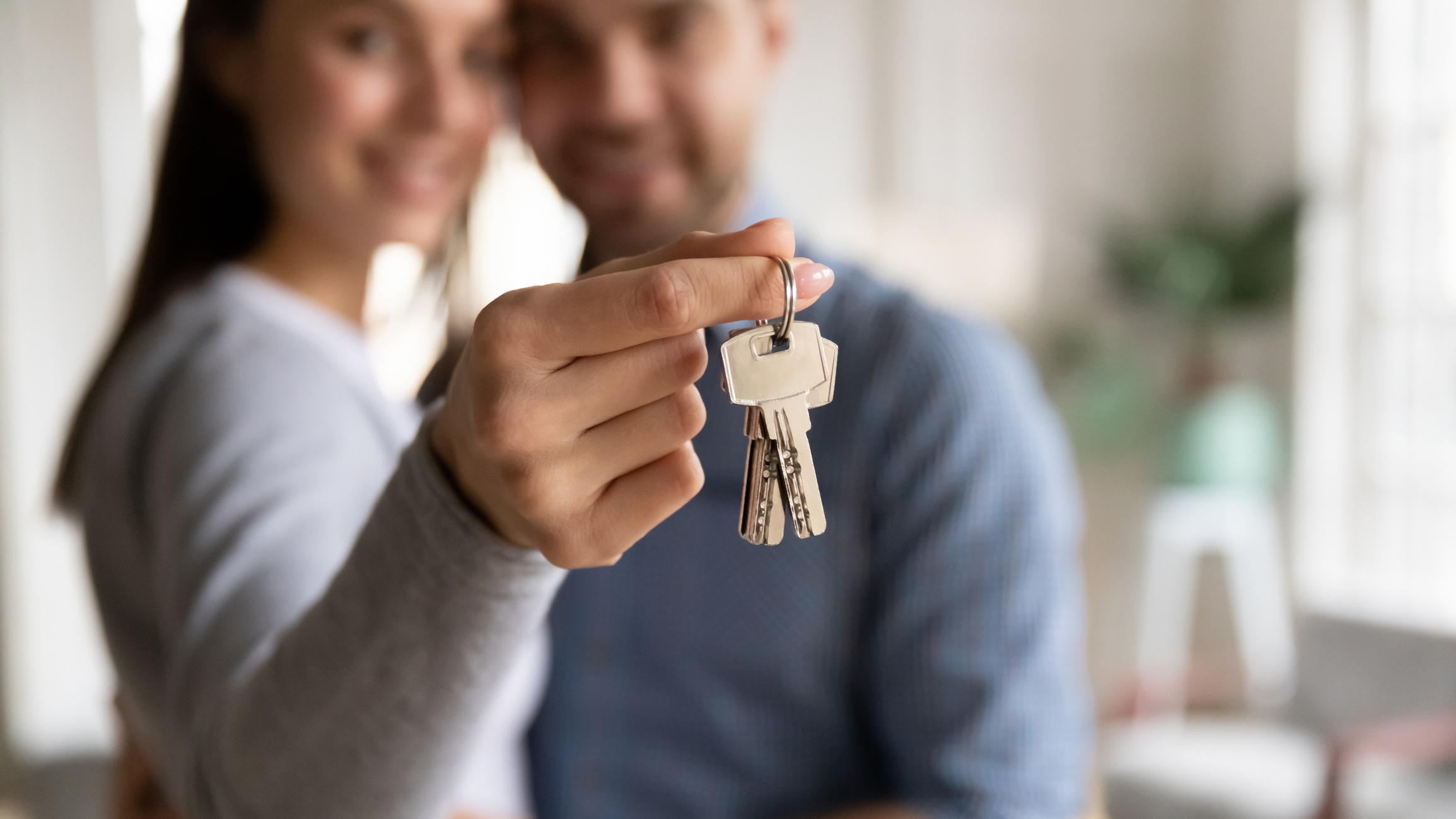 First-time buyers could be missing out on £32,000 bonus from the government 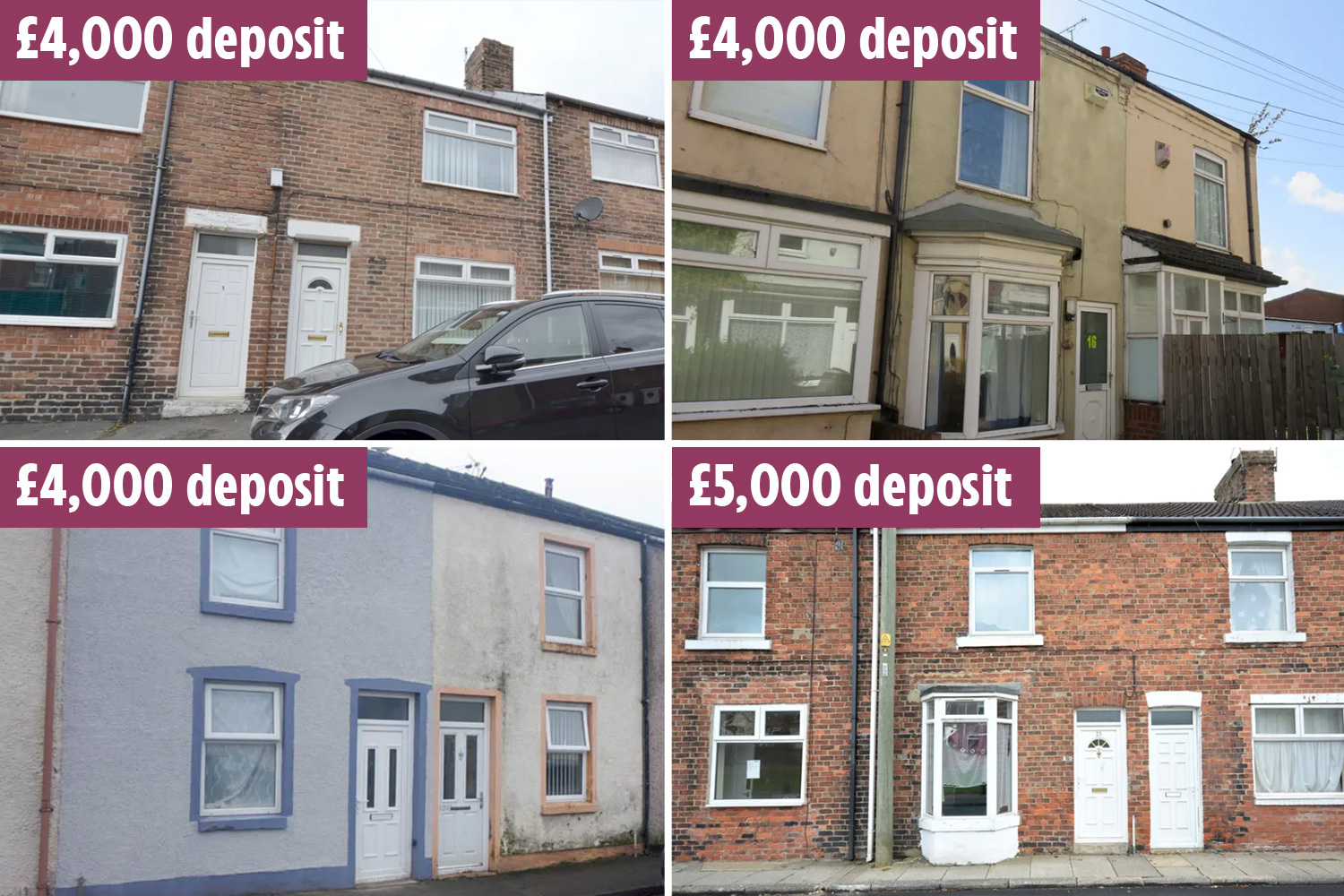 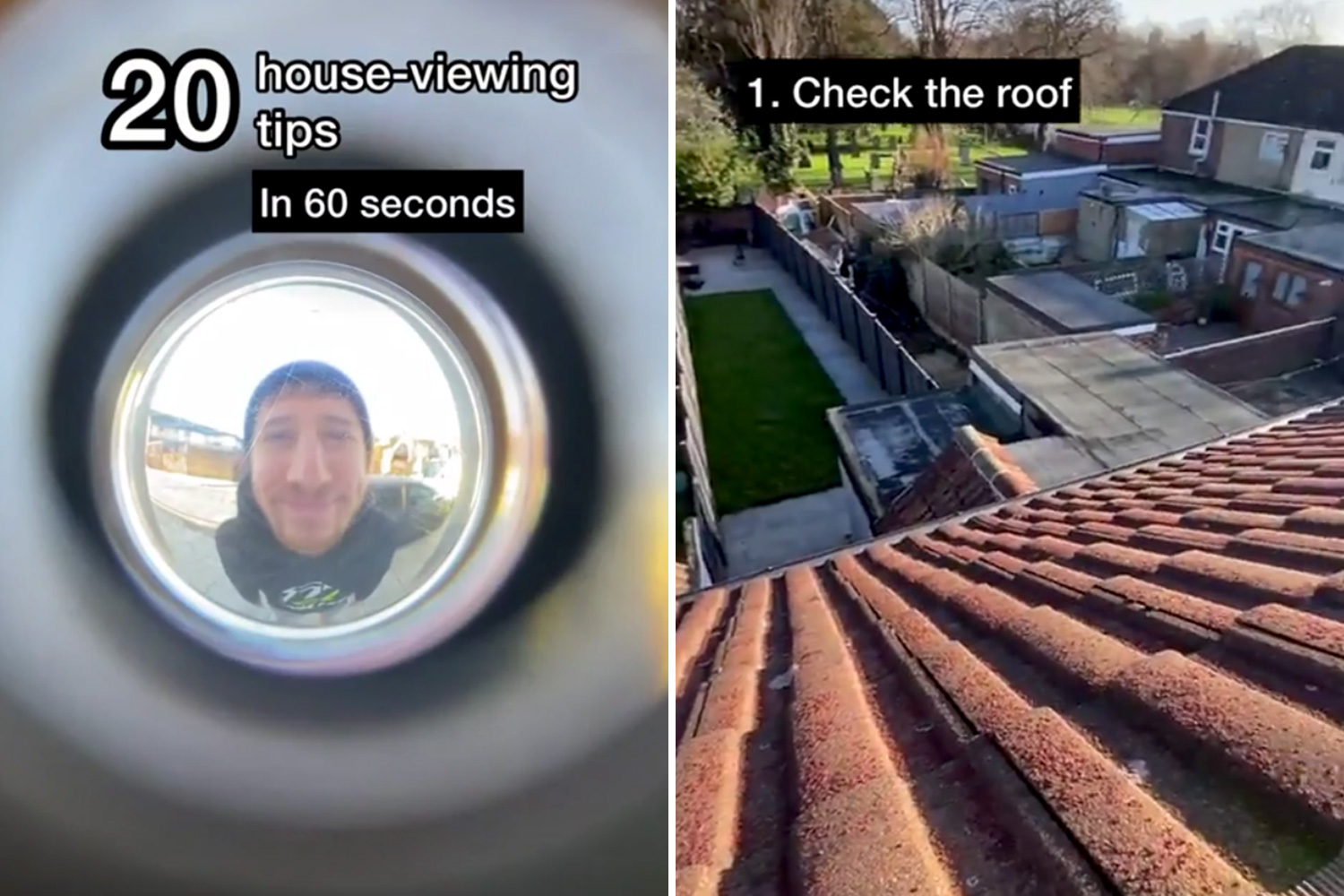 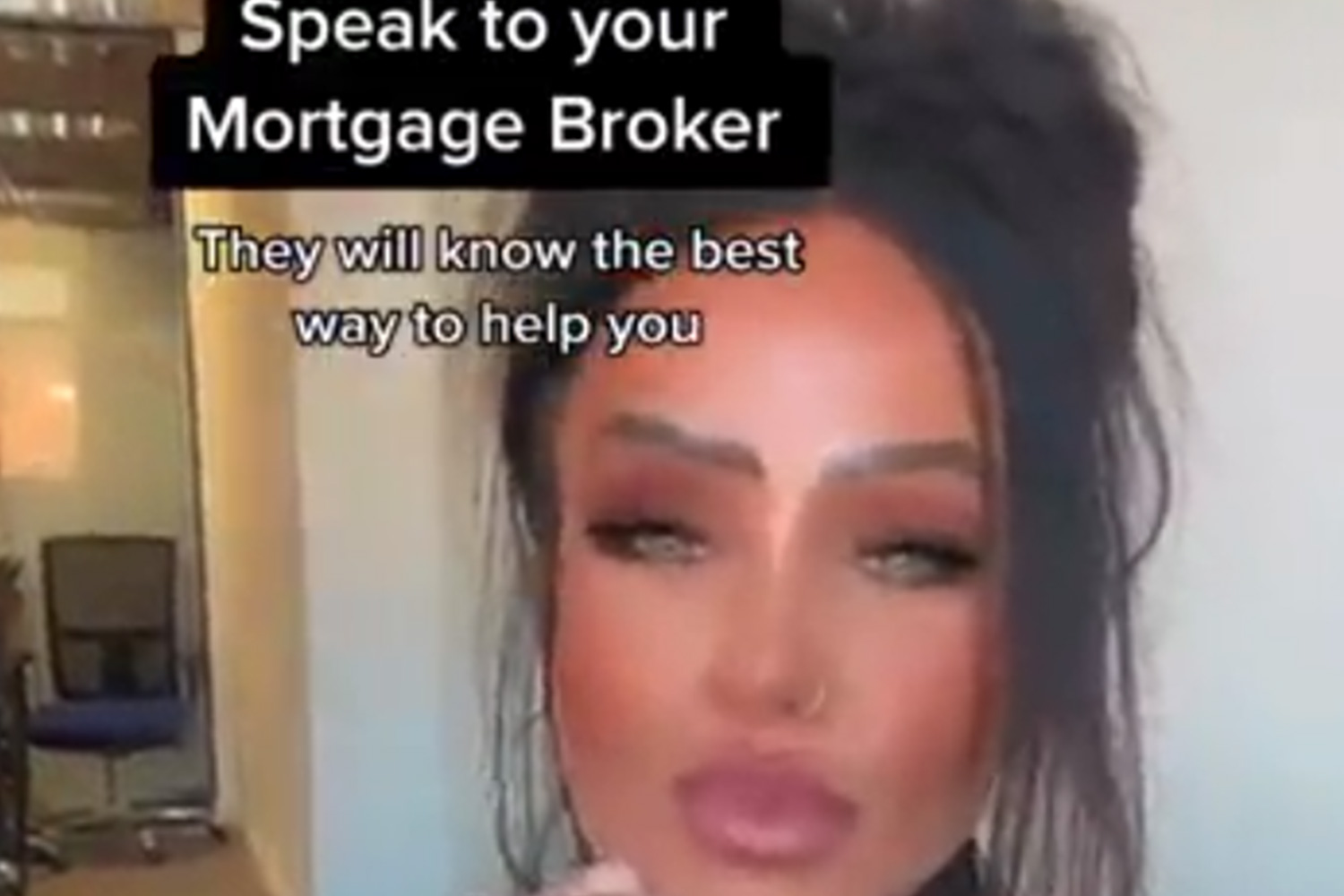 First-time buyer Theo Fashesin, 28, bought her first home in Manchester after it turned out to be impossible for her to buy alone near her family in London.

Moving out of London isn't the only opting for first-time buyers – there are plenty of Government schemes to help you get a foot on the property ladder in the city.

As well as shared ownership and Help to Buy, London Mayor Sadiq Khan introduced "first dibs" rules which restricts sales of all new-build homes in the capital worth up to £350,000 to UK buyers for three months before any overseas marketing can take place.