Dad, 43, who piled on weight during lockdown after being warned not to exercise due to a life-threatening heart condition unveils his ripped physique after losing 4st with specialist training

An overweight father who was warned his heart was like a ‘ticking timebomb’ and advised to avoid exercise defied doctors’ orders by hitting the gym and honing an enviable six pack.

Father-of-two Amir Ali, 43, from Ealing, West London, was previously fit and active, but after being diagnosed with the life-threatening heart condition arrhythmogenic right ventricular cardiomyopathy (ARVC) in October 2015, he was advised to avoid exercise.

But after piling on the pounds during the second lockdown Amir, who lives with his wife Rehab, 35, a stay-at-home mum, and their children Zakaria, 11, and Mohammed, eight, in Ealing, West London, took drastic action in July 2021 and hired a personal trainer.

By then he weighed 13st at 5ft 6in, making him borderline obese.

His trainer liaised with his consultant to create a safe exercise plan, and after eight months of regular workouts he dropped 4st to 9st 1lb and completely transformed his physique. 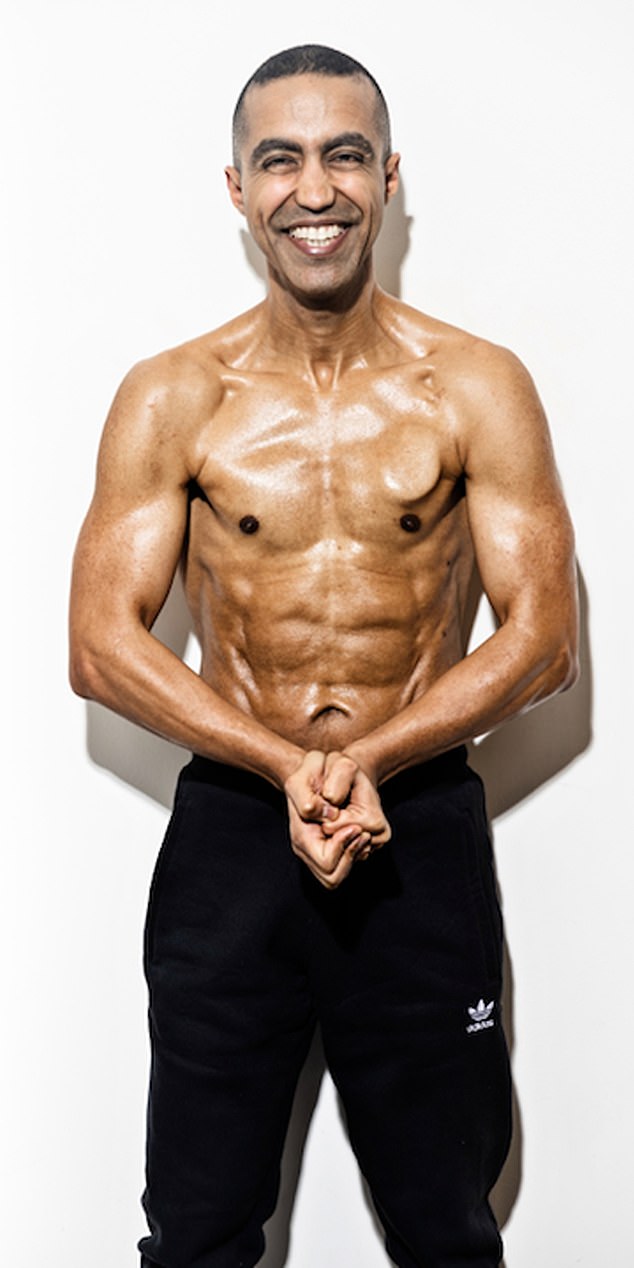 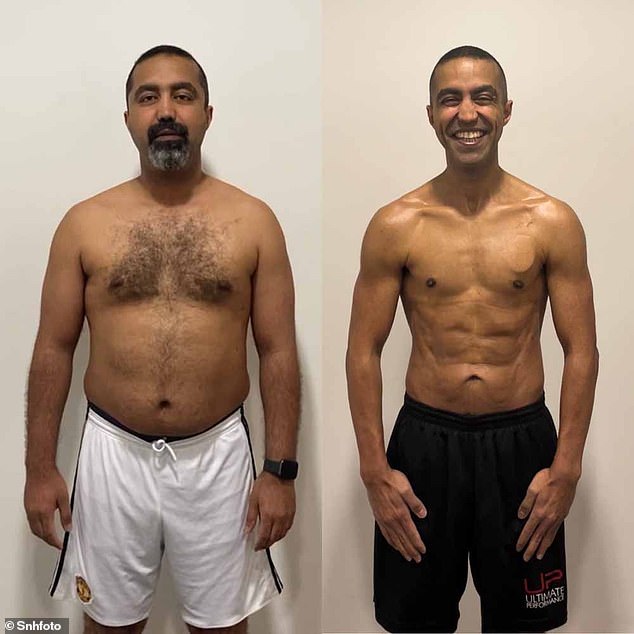 Amir weighed 13st at 5ft 6in, making him borderline obese (left), but after eight months of regular workouts, he dropped 4st (right) 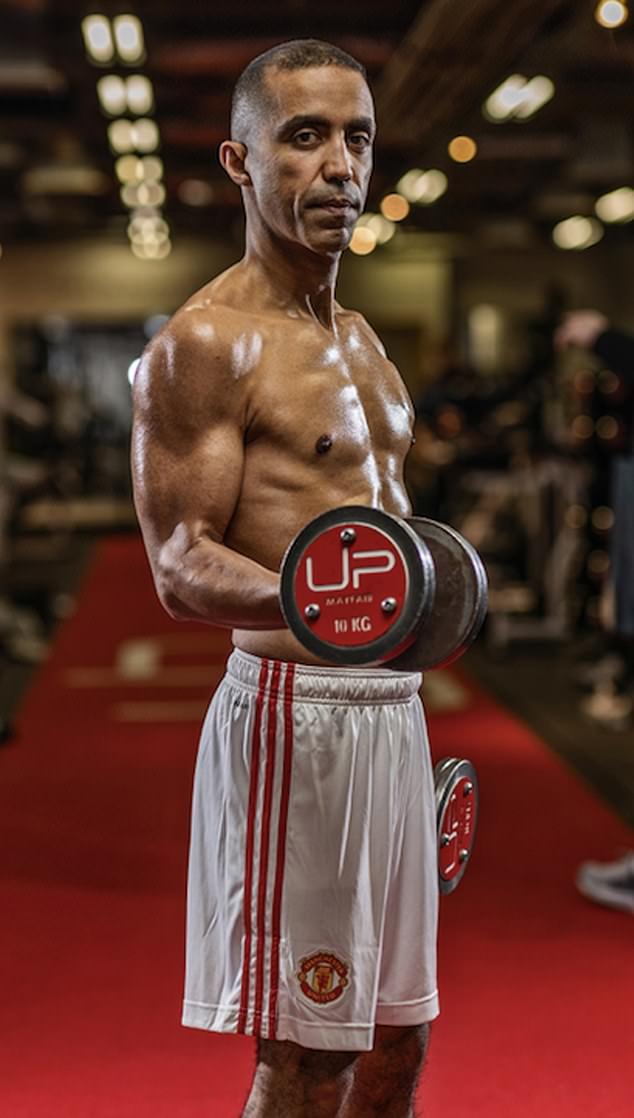 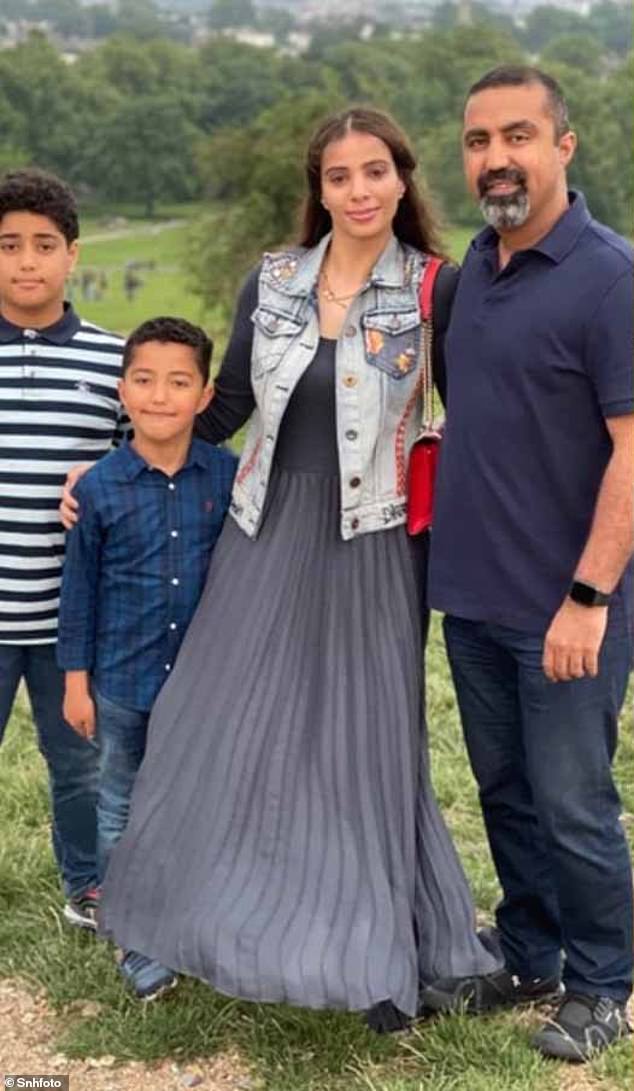 Amir, pictured with his wife Rehab, and children Zakaria, and Mohammed, used to lead an active lifestyle, but piled on weight during the second lockdown

Amir was diagnosed with the life-threatening heart condition arrhythmogenic right ventricular cardiomyopathy (ARVC) in October 2015, after suffering chest pains and palpitations that he had largely ignored for months.

ARVC, a disease of the heart muscle can cause life threatening arrhythmia – an irregular heartbeat – and sudden death.

‘I knew my heart was a ticking time bomb. I had no idea when it would just give up,’ Amir said.

‘Then, during the second lockdown, I put on so much weight. I’d never been heavy and I knew I needed professional help.

‘I went in to see a personal trainer fully expecting they’d turn me away. I showed them my medical reports and everything.’

So, despite his cardiologist advising him to give up exercise because elevating his heart rate could be life threatening, last July Amir hired the personal trainer and began working out three times a week. 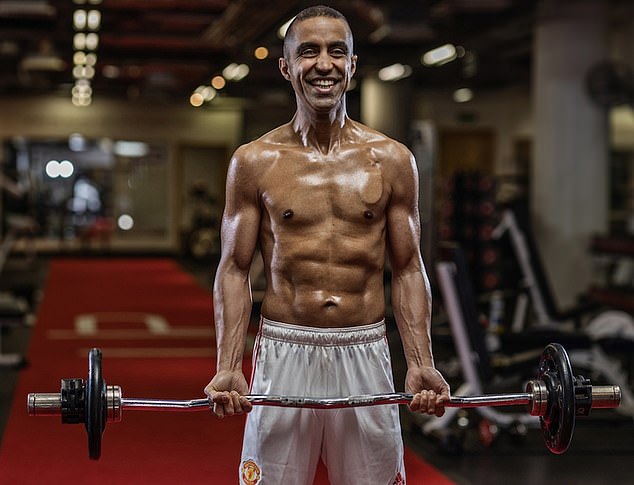 Despite his cardiologist advising him to give up exercise because elevating his heart rate could be life threatening, last July Amir hired the personal trainer and began working out three times a week

He said: ‘After my diagnosis, I was living in fear.

‘I’ve got kids, a family, a life to lead. All of that could have stopped at any second.

‘Since I started training, I have lost nearly 4st, I’ve stopped having heart palpitations and my six-monthly heart check-ups have been reduced to once a year.

‘My doctors are delighted by my progress and I feel much stronger and fitter.’

Before his diagnosis, Amir had been super-fit. A karate black belt, he enjoyed frequent games of football, was a gym regular and walked for miles most days. 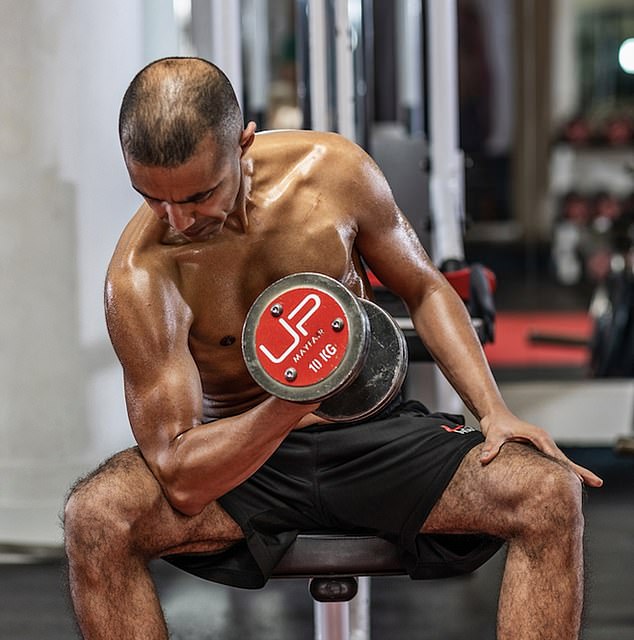 Taking every possible measure to ensure his safety, his trainer tailored a diet and exercise programme for him that was given the nod by his doctor, who also carefully monitored him

He had no idea he was facing such danger, saying: ‘I thought heart palpitations were entirely normal and assumed everyone got them.

‘I thought it just happened in the same way your stomach rumbled. I got them daily for years.

‘When I began having left-sided chest pain, I did what I’d always done and let nature take its course. I’m not one to go to the doctor. I only did that when the pain hadn’t stopped for six months.’

Amir was then put through a series of tests that revealed scarring on his heart and led to a diagnosis of ARVC.

And his active lifestyle was ‘turned off overnight’ when doctors warned him to take it easy and give up on strenuous exercise. 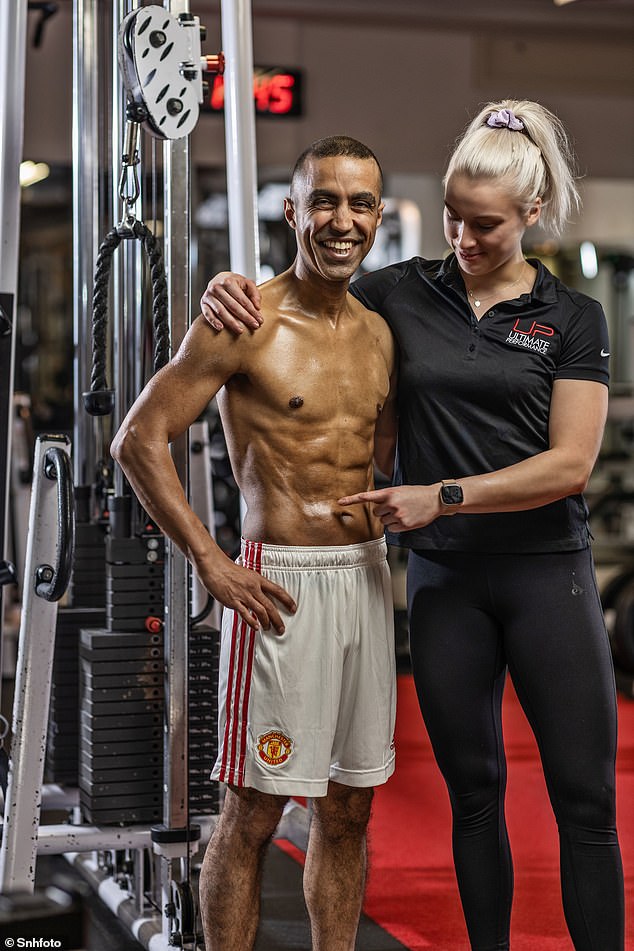 Doctors also put him onto medication for heart failure and high blood pressure and recommended an operation to fit an implantable cardioverter defribulator (ICD), an electronic device surgically implanted near his heart to regulate any abnormal rhythms.

Amir initially rejected it, because he was concerned about having a foreign body inside him. But after speaking to several consultants who made it clear to him that his life hung in the balance, Amir relented and had the ICD fitted in March 2020.

But, during the Covid lockdowns, his sedentary lifestyle saw him piling on the pounds and suffering more frequent heart palpitations, as well as being out of breath.

Worried that his life was ‘very fragile’, Amir felt he was caught in a catch-22, because he was desperate to feel stronger and fitter, but had been told that strenuous exercise could be dangerous.

Amir’s doctor at London’s St Bartholomew’s Hospital warned him not to elevate his heart rate by more than 70 per cent and not to do any overhead weightlifting or anything that could cause tension across his pecs, because of his ICD device. 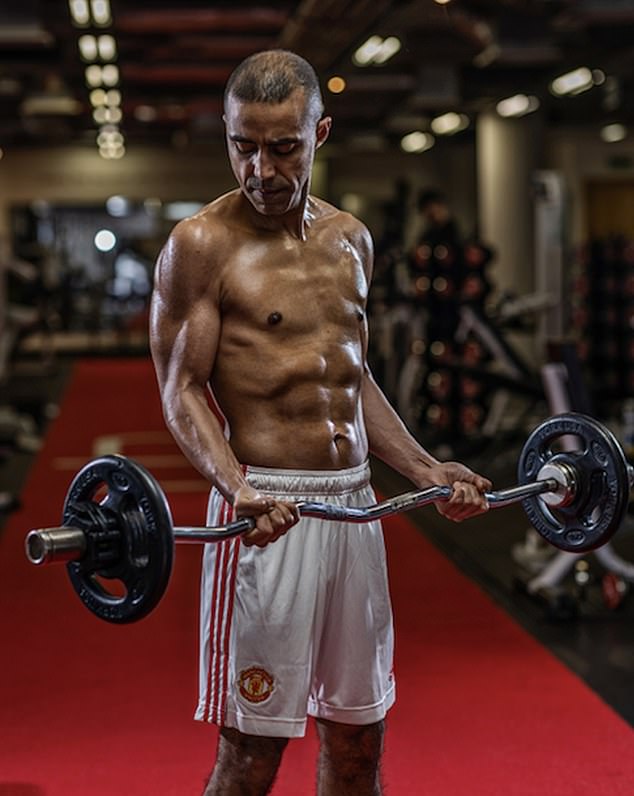 Wearing a heart rate monitor throughout to ensure the beats per minute (BPM) stayed within a safe range, he incorporated gentle weightlifting and stretching

He said: ‘Before all this, I’d considered myself a very active guy.

‘After being diagnosed, I was suddenly worrying about even walking up the stairs and getting out of breath.’

But, despite the risks, Amir contacted global personal training business Ultimate Performance and was connected to PT Emma Kershaw in July 2021.

Pulling out all the stops, Emma established a relationship with Amir’s consultant, researched his heart condition and even sent videos of exercises to the hospital to check they were suitable for him before including them in his three times weekly workout regime.

Taking every possible measure to ensure his safety, she tailored a diet and exercise programme for him that was given the nod by his doctor, who also carefully monitored him, and he was soon gently working out and loving it.

Wearing a heart rate monitor throughout to ensure the beats per minute (BPM) stayed within a safe range, he incorporated gentle weightlifting and stretching.

Amir said: ‘Emma has been amazing. I call her my second mum as she has taken such good care of me.

‘She’s monitored every single new exercise to see the stress it causes to my heart.

‘And if something hasn’t worked for me, she’s found another way to work the same muscle.’

But, despite Emma’s care, working out has not been without its anxieties for Amir.

He said: ‘I did once joke with Emma that a lot of heart attacks happen in the gym. Of course, I was worried but I trust her and knew I had to do this.’ 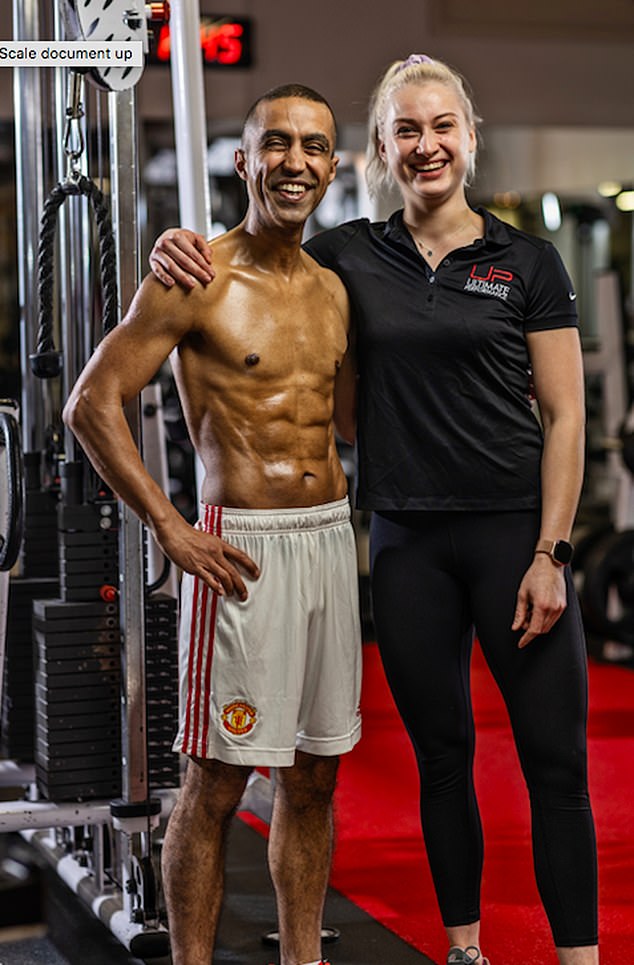 Now, Amir has never felt better, he hasn’t had a heart palpitation for months and if he loses his breath working out with Emma it only happens for seconds

More remarkable still, his resting heart rate has dropped from 84 bpm to just 48 bpm – akin to that of an athlete.

Still working out with Emma three times a week, he said: ‘I feel like RoboCop. Honestly, I’ve never felt better.

‘I haven’t had a heart palpitation for months. If I lose my breath working out it only happens for seconds.

‘I feel better than I ever have and my doctor said that since my last medical reports they now only need to see me once a year.’

Although his condition cannot be cured and he will need monitoring for the rest of his life, Amir says he credits Emma with giving him his life back.

Cardiomyopathy is a disease of the heart muscle that affects its size, shape and structure.

The condition is usually inherited.

The three main types of cardiomyopathy are:

All of these types of cardiomyopathy affect the heart’s ability to pump blood around the body efficiently.

They can also impact the way electrical signals make the organ beat.

There is no cure, however, in most cases people’s quality or length of life is unaffected.

Therapies may include medication, treatment to normalise heart rhythm, pacemakers and, in rare cases, heart surgery or transplants.

He said: ‘She has been amazing.

‘I would never advise anyone with a heart condition to work out without making sure they are monitored by a proper trainer and have the approval of their doctors.

‘But I do feel that exercise has done wonders for me.’

Emma has been incredibly impressed by Amir’s progress.

She said: ‘At U.P., we as trainers are all deeply invested in helping our clients achieve their fitness goals, and we all genuinely want to go the extra mile for them.

‘Working with Amir meant we had to be extra judicious in that we needed to be incredibly careful in terms of exercise selection and working within specific heart rate zones.

‘The team and I did a lot of research and liaised constantly with Amir’s consultant to make sure his personal training programme was appropriate, and monitored his heart rate in real-time throughout every session.

‘It is an absolute privilege to train Amir and we are all so proud of everything he has achieved at Ultimate Performance. I look forward to many years of continuing to work together with Amir as a team, improving his physique and health even further.’

He said: ‘Exercise limitation plays an important role in the management of patients who have a diagnosis of ARVC and advice on exercise consists a central part of every consultation.

‘Various studies have shown that exercise for a long duration and of high intensity can have a negative impact on the severity of the condition and the risk of dangerous ventricular arrhythmias and, even, cardiac arrest.

‘The current recommendation in patients with ARVC is to avoid endurance and high intensity exercise. Unfortunately, there is little evidence on how much and what type of exercise is safe in ARVC. It is recommended that all patients with ARVC discuss exercise advice with their cardiomyopathy doctor.’