Theatre audiences, and staff working in theatres, should be fully vaccinated against COVID-19 or be barred from the building, says the Melbourne Theatre Company’s departing artistic director, Brett Sheehy.

Speaking exclusively with The Age ahead of his stepping down after almost a decade leading the state’s premier theatre company, Sheehy also revealed he had agreed to stay at the company a year longer than he’d planned when it emerged in late 2020 that the vaccine rollout would be a lot slower than they hoped.

When planning its 2021 season, MTC assumed Australia would be fully vaxxed by the time Cyrano was due to premiere in early August, Sheehy said. Instead it didn’t even have an opening night.

“[The season] was all cautiously, scientifically calibrated to no final useful purpose,” he said. 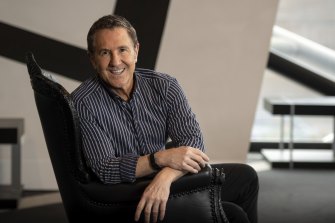 MTC was unable to put on 168 of its planned performances this year, is projecting a box office loss of $6 million and had to cancel three of its last four programmed shows for 2021. The final show depends on winning an exemption to rehearse before the state government’s road map officially allows: a lifeline MTC is still lobbying the government for.

Sheehy said his personal view was that “those admitted to our theatres, and those working in our theatres, [should be] fully vaccinated unless there’s a medical reason not to be”.

“I realise that requires a lot of negotiation and a lot of legal investigation,” he said. “The mandated double-vax for audiences: my understanding is that is doable. The tricky thing is employment, and of course I’d hate to see any artist of talent refused a job because they weren’t vaccinated.

“But, you know, it’s a global pandemic… I’d love to see federal or state laws passed which then enable us to insist on vaccination for both audiences and employees unless there’s a medical excuse.”

Sheehy said it “broke my heart” last year when it was months into the pandemic before any state or federal arts minister said it was important to protect arts and culture.

“That was the most dispiriting thing for the artistic community in Australia, I think: the impression that we didn’t matter,” he said. He found it bizarre and frustrating that the streaming music and drama that kept the country entertained, inspired and provoked in lockdown was the product of the arts and culture that was being neglected.

“To have been sidelined, certainly at the start of the pandemic was really hard to take,” he said.

He said the country’s slow vaccine rollout had been behind his staying at MTC an extra year to plan the 2022 season (to be announced later this month and overseen by his successor).

“We got towards the end of 2020 and we realised the vaccine rollout wasn’t going to happen for months and months,” Sheehy said. “It’s a really disappointing and a weird way to end one’s tenure but, you know, infinitely worse things have happened to people than that.”