Did I just witness the end of God? The Son was meant to die but not the Father as well; but in Jeremy Deller’s spooky installation in a deconsecrated church in Collingwood, the pair of them perish, slowly consumed by fire from their heads to their middle. 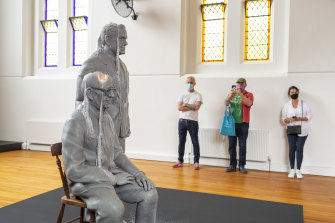 Staged by the Australian Centre for Contemporary Art, this one-day event by the British Turner Prize-winning artist cast the audience into a thrall of personal speculation.

Even behind their masks, people seemed spellbound by the walk-around spectacle: two suited wax figures burning on a low platform, an older chap seated on a wooden chair, with a younger one standing purposefully beside him.

As people moved around the proud pair, you could sense their puzzlement that the ensemble will soon trickle to the floor in self-combustion. You could sense that viewers were searching in themselves for an explanation.

It didn’t make it simpler that these monumental candles were presented as an analogy to God. Before the audience entered the space, they passed through a makeshift narthex, where Jesus was prominently quoted: “Truly, truly, I say to you, the Son can do nothing of his own accord, but only what he sees the Father doing. For whatever the Father does, that the Son does likewise”. — John 5:19 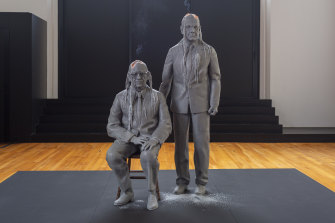 One reaction was to read Deller’s two figures as the original Father and Son of the Christian narrative. Yet they didn’t look ethereal but rather like ordinary folk who might have gone to Church in the 1960s, dressed in their Sunday best.

Who were they? And what would it mean that the effigies of the God-fearing laity are liquified? They’re damned like the molten images of false gods so angrily despised in the Bible. The self-destruction of the sculptures is like an image that embodies its own iconoclasm.

Because of its slow pace, the gradual immolation of father and son didn’t make people anxious. It seemed as if father and son might be representatives of a past congregation who are reconciled to burn close to where the altar might have stood when the building functioned for the liturgy.

The old man seemed contented and happily resigned, while his stalwart son looked forward, almost confrontingly, and with a positive bearing, as if ready to march into the future. You sensed that they were getting to an age where the son might have taken over his father’s affairs. 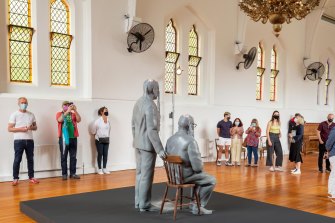 The event cast the audience into a thrall of personal speculation.Credit:Christian Capurro

As an allegory, it’s touching for an artist to revisit the relationship between the divine Father and Son and to acknowledge that a part of the Father must pathetically die with the Son.

But it’s also theologically awesome. There are many amazing details of the Christian God, who is not only both the Father and the sacrificial Son but another person as well, namely the Holy Spirit.

All of these sacred entities existed from the beginning of time. They were not created, including the Son, because although a father is normally defined by siring a child, Jesus is explicitly the Word made flesh; and the Word was already there from the beginning. So the Son is not quite a son in the normal sense.

Since early times, Christians themselves puzzled over the mystery of the three coeternal persons. Augustine, for example, asked how the Trinity can be inseparable as one substance but also three distinct persons. On different occasions, each acts independently. Their identities cannot be collapsed into just one, even though they constitute one Divinity.

I don’t think that Deller necessarily has any theological answers but he provides a challenging angle on the way that fathers and sons—like mothers and daughters—are a bit interchangeable, because a father was always once a son and reproduces his dad’s image at each stage.

The audience who formed a changing vigil while the two archetypes went down from noon into the night may or may not have thought of the theological Son being inherent in the Father. But watching the simultaneous melt-down, everyone was recast with a common bond, where you realise that you reconstitute your parents till you, too, come to an end and thus push your parents further into the past.