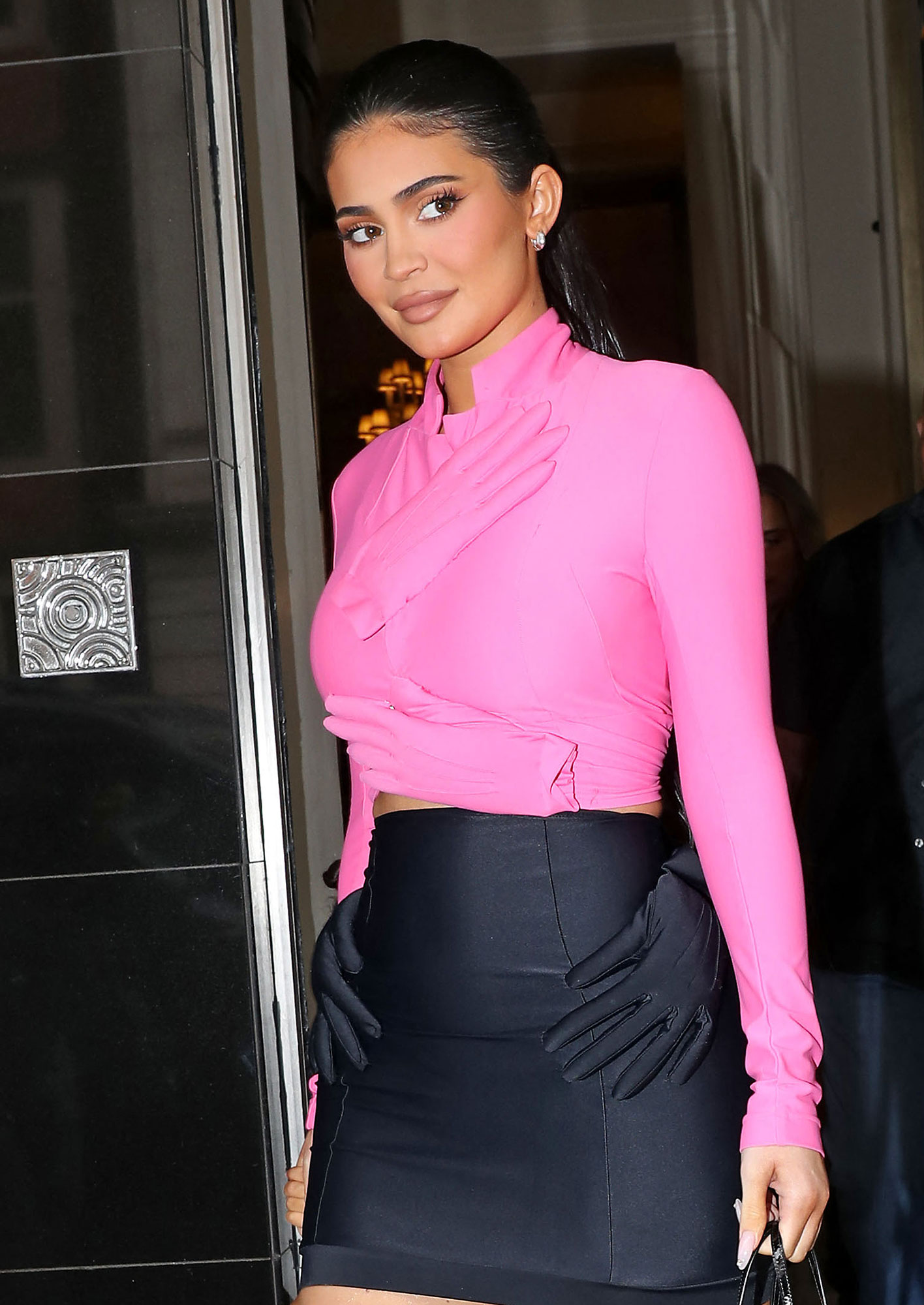 The Kardashians star, 24, was photographed leaving the Claridges hotel on Thursday, August 4, in a Barbie pink top — from the fashion house’s 2007 collection — that was adorned with 3D gloves at the chest. Jenner teamed the skintight number with a coordinating miniskirt that featured hands hugging her waist. The California native complemented the look with a black mini bag and pointed toe PVC heels. For her glam, Jenner rocked a sleek ponytail and soft pink eye makeup.

The Life of Kylie alum was in England to see Kylie Cosmetics at Harrods. “Stopped by @Harrods today with goosey girl to see @KylieCosmetics & @Kylieskin wow what a dream!!!!!!!!! Thank you for having us,” Jenner captioned an Instagram carousel that included shots from her and her daughter Stormi’s visit. Stormi, 4, looked just as fashionable for the outing, sporting a leather halter top, baggy jeans and sneakers. (Jenner announced that Kylie Cosmetics would be available at Harrods back in June.)

Stormi received a warm welcome at Harrods with the department store setting aside a variety of luxury items, including Dior handbags, and toys for the little one. “Look at what Harrods did for Stormi to go shopping. Is this not the craziest? You are a spoiled, spoiled girl,” Jenner said in a video shared via her Instagram Story on Thursday.

Jenner has been busy at work with her beauty brand as of late. On Wednesday, August 3, she paid a visit to her Kylie Cosmetics lab in Milan, Italy.

Kylie Jenner Through the Years: A Look Back in Photographs

“In the lab creating new magic for you guys 💕 better than ever,” the Kylie Skin founder captioned a slideshow of photos via Instagram. In the shots, the beauty mogul is seen wearing a white lab coat while inspecting and weighing a variety of colorful and shimmery products.

After launching Kylie Cosmetics in 2015, Jenner decided to sell 51 percent of her company to Coty Inc. in November 2019 for $600 million.

“The reason why I sold half my company was to have this big infrastructure to go global,” the businesswoman revealed in her Inside Kylie Cosmetics Part Three: Kylie 2.0 Youtube video, which was released in July 2021.

About Last Night: See the Best Dressed Stars on the Red Carpet and Beyond

The line also got a makeover, rebranding as both clean and vegan, which Jenner shared was “really important.”

“I’ve learned so much, so much more than what I knew when I started Kylie Cosmetics,” she said. “Being clean and vegan and cruelty-free and paraben-free, all these things are really important to me now. I was to just be really proud of everything that I release.”