Home » Lifestyle » From the Archives, 1976: After 27 years Blue Hills ends in a flurry of suds

Exit Blue Hills in a flurry of suds 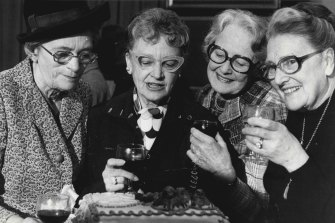 It was a happy ending, of course, for the estimated 500,000 people around Australia who turned into the ABC for the 5795th episode – 33 years after the serial began as the Lawsons.

The programme’s leading characters came together at the Dunvegan homestead, scene of many a kitchen sink drama over the years.

Grannie Bishop, played by Queenie Ashton, had the last word, a homily apparently aimed at all those faithful listeners who wanted Blue Hills to go on forever.

In case you missed it, Grannie said people never really died until nobody wanted to remember them anymore.

“We don’t have to see or hear people every day of the week to imagine them in our surroundings, even to live their lives with them” she lectured.

“And so, you see, it isn’t really so very hard to say goodbye and God bless.”

On that note, Ronald Hammer’s Pastorale, the Blue Hills theme music, swelled up and the no-nonsense ABC tones of narrator Paul Maclay announced: “And so ends Blue Hills by Gwen Meredith.”

Mr Maclay opened episose 5795, a half-hour special with a longer then usual summary of what was happening in Blue Hills.

“The lives of the various people of Blue Hills have moved towards a reasonably settled future, or so it would seem at the moment,” he said.

That last line paved the way for some final episode drama when Melissa decided to leave at two hours’ notice for San Francisco where she was to meet the mysterious Mr. Castles.

There was just a hint of sex in this final episode as Rene sighed and whispered to Joanna.

“My, and at this time of the morning,” said Jo.

Rene and Jo would never have got away with it in 1943 when the ABC commissioned Gwen Meredith to write The Lawsons, the forerunner of Blue Hills.

But morals and manners have changed since then when The Lawsons was planned as wartime propaganda to encourage farmers to grow soya beans for plastics, Miss Meredith, now 68, said yesterday on ABC radio.

She said she had practised her own censorship, based on listeners’ letters, although she had been told “you can’t have that on ABC” a couple of times.

“This was the kind of thing you could have on the children’s session now, practically,” she said with a laugh.