Federal Health Minister Greg Hunt is poised to pull the pin on his political career at the next election, with a number of his colleagues expecting he will announce his retirement tomorrow.

There has been growing speculation over the past 12 months that Mr Hunt, who has overseen Australia’s response to the coronavirus, would quit ahead of the next poll, due by May next year. 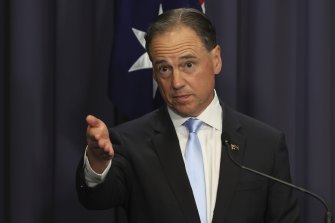 He has publicly denied on several occasions this year that he was considering retirement.

When asked by this masthead in July if he intended to retire, he said “No”, citing there had been similar speculation leading up to past elections.

Treasurer Josh Frydenberg told reporters today he had not seen details of a story, published in the Australian Financial Review, but said Mr Hunt was his “closest friend in this place”.

“We are very dear friends and he has been an outstanding Health Minister through this crisis,” Mr Frydenberg said.

“The fact that Australia has one of the lowest mortality rates in the world and the fact that we have one of the highest vaccination rates in the world is in due to no small part to the incredible work that all health professionals have done across Australia, and Greg as the Health Minister, on this once in a century pandemic has been outstanding.”

The father-of-two, who was first elected in November 2001, is one of only three Liberal MPs, along with Prime Minister Scott Morrison and Home Affairs Minister Peter Dutton, to have served in federal cabinet since the Coalition came to power in September 2013. He has held the health portfolio since January 2017.

The Sun-Herald and The Sunday Age reported on the weekend that some Liberals believe the Health Minister could replace his former cabinet colleague George Brandis, whose time as High Commissioner in London is due to expire at the end of April 2022.

Mr Brandis has not requested an extension to his four-year term, which is regarded in government as having been successful given his consequential involvement in the free trade deal with the UK, the coronavirus vaccine swap and negotiations on climate policy.