But not too tired to create a hilarious, expletive-filled website for Hank, the possible love-child of Marley from “Marley and Me,” King Neptune and an eight ball of cocaine. 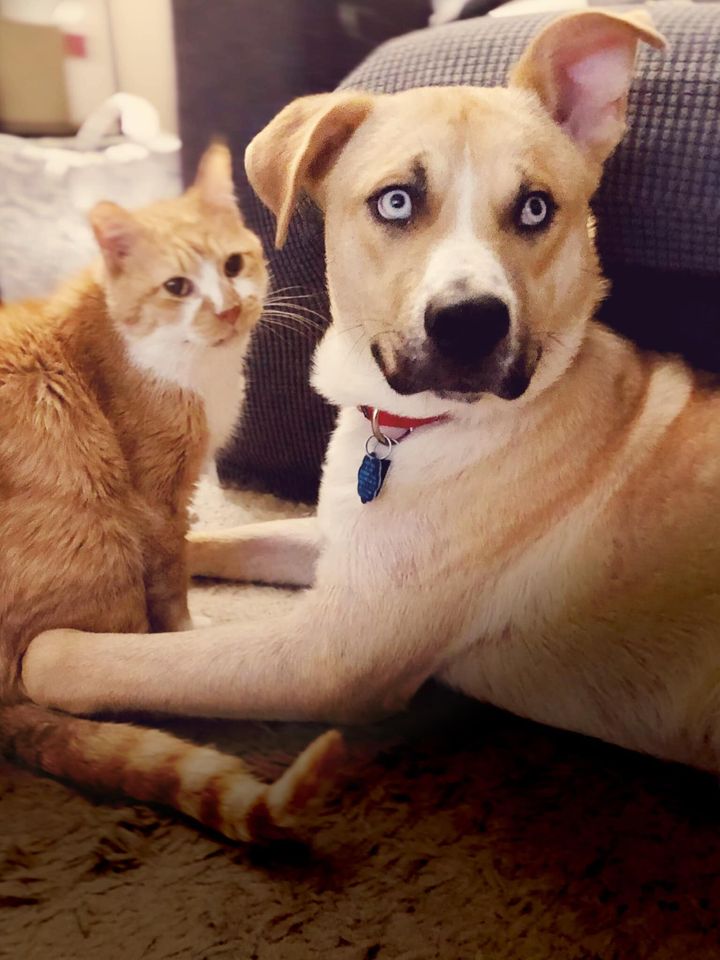 “While we were parked outside the Red Bull factory, Hank flew into our passenger side and immediately helped himself to our stash of road trip snacks like a teenager raiding the fridge after school,” Clauder’s adoption site for Hank reads. “He’s 54 pounds of pure, unadulterated, kinetic energy with eyes like the ocean. Unfortunately, that ocean also sank the Titanic.”

The page, which is titled “please adopt this hellion,” offers a lot of useful — and very funny — information about the peppy pup.

“He knows basic commands such as ‘sit,’ ‘down,’ ‘shake,’ and ‘why are you so fucking mental, stop chewing on that and get in your fucking kennel.’” 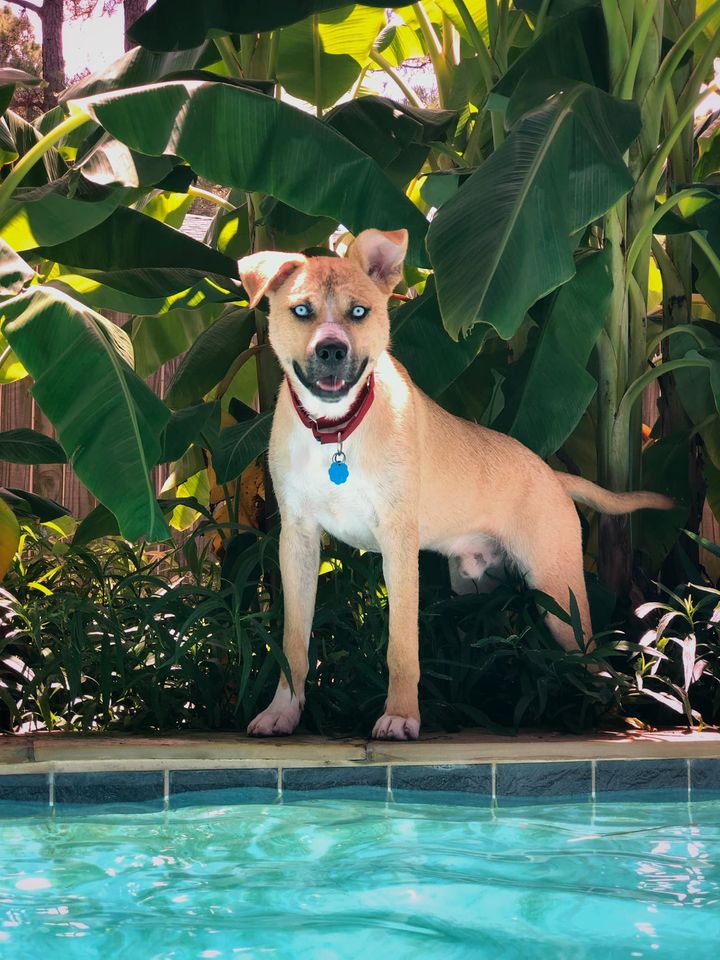 “I chopped his balls off because nobody needs to be subjected to any of his hellspawn.”

“He’ll fucking stand in between your legs [while you’re cooking] and trip you up while you’re holding knives.”

And his hyperness is no exaggeration.

“We’re all tired of Hank. Not because we don’t love him, we’re just TIRED. It’s like he drank ALL OF OUR COFFEE.” 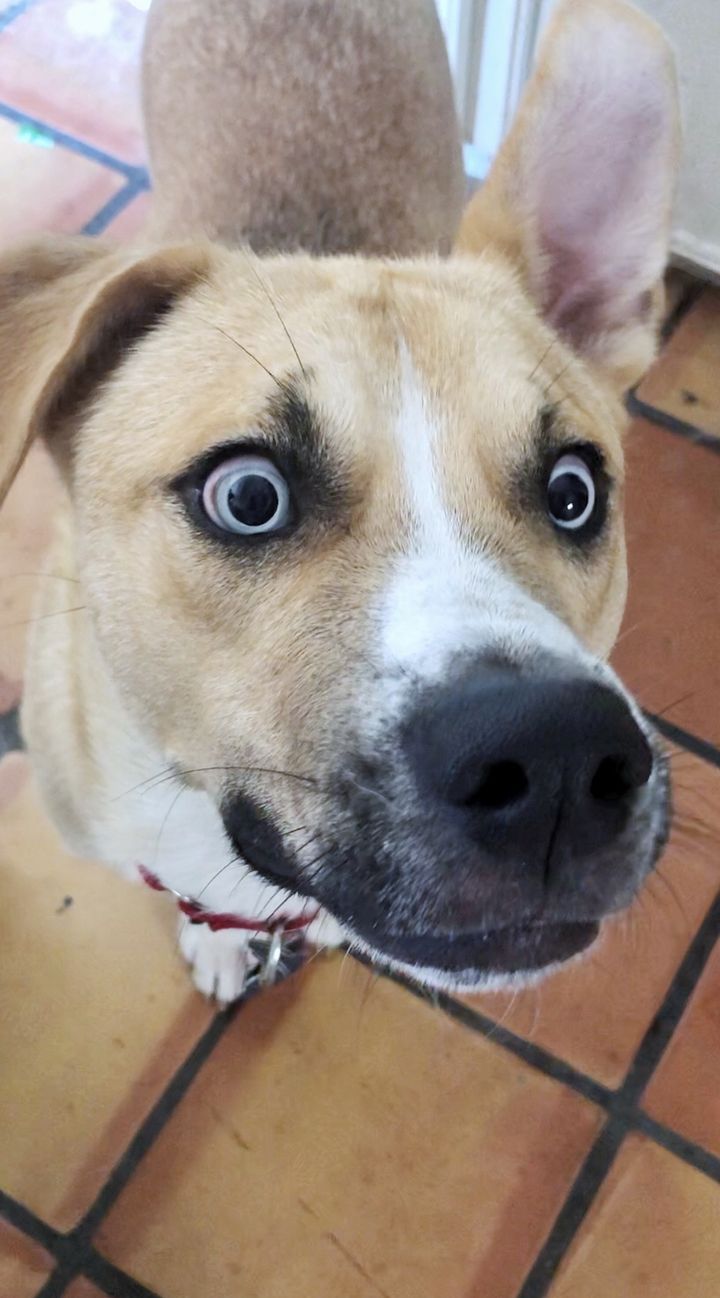 Clauder told HuffPost via email that creating a site for Hank seemed like a natural thing for her to do, since she’s volunteered for the Houston-based rescue Abandoned Animal Rescue for the past eight years and maintains their website.

She also said that the foul-mouthed sailor language she used on the site was “intentional” and “geared toward exactly the kind of person Hank needs.”

“The kind of people put off by it would not be a good match for him,” Clauder said. “When evaluating his personality, I realized Hank needs a special family and I didn’t want to build a cutesy ‘what a sweet little puddy pie’ kind of website.”

“Not only would that be a complete lie,” she added, “but would actually increase the chances that Hank would be returned, which would further harm his adoptability.” 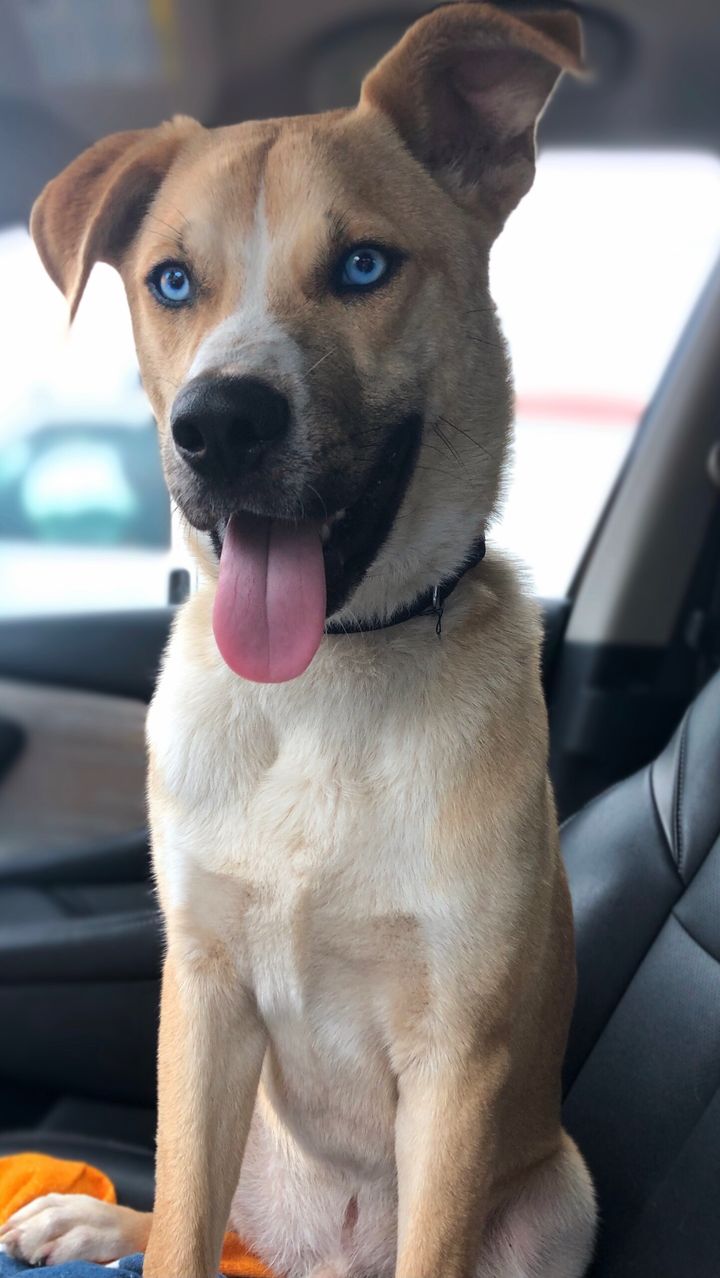 “My goal is not JUST to get him adopted – if it was, I could have played up his beautifully unique eyes, happy-go-lucky goofiness, and complete loyalty – but the ultimate goal is a lifetime match.”

She said the ideal owner for Hank needs to be loving, patient and “able to provide guidance and training, and that’s a real commitment.”

“I also think they need to have a thick skin, a sense of humor, and the ability to guide Hank in a way that we can’t,” explained Clauder, who already owns two senior dogs and a cat that are all equally exhausted by Hank’s youthful exuberance.

Clauder describes Hank as smart but stubborn, so his “idea of fun and play is something not everyone may appreciate.”

“Hank is loyal, curious, smart as hell, and is just the happiest dog I’ve ever met,” she told HuffPost. 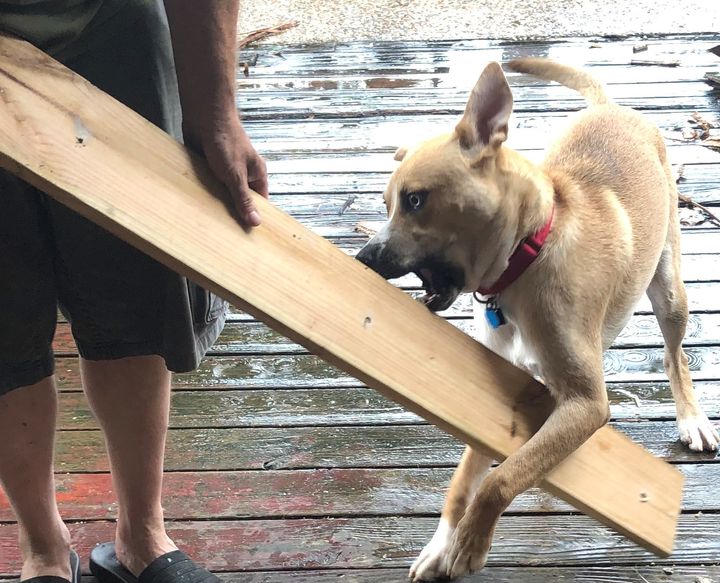 Due to Hank’s very special personality, Clauder says Hank’s rescue organization Friends For Life has received several applications and is in the process of vetting applicants to find the best match for the hellhound.

“No decisions have been made yet so if someone feels a connection, they should definitely apply,” Clauder said. “We know there is the perfect family out there who can give Hank the life he deserves. Despite the tone of the site, we aren’t rushing this.”

In the meantime, Clauder is fine looking after Hank and says that she’s trying to tamp down his energy by playing fetch with him (although he doesn’t understand the concept of releasing the ball) and teaching him new tricks.

“I haven’t tried to give him any knives for cutting the vegetables, but we are working on training Hank to take things to the trash,” she joked to HuffPost.