So what IS a negroni sbagliato? Cocktail lovers go wild for prosecco-based drink on TikTok after House of Dragon’s Emma D’arcy revealed it is their favourite beverage (and it’s ‘super-easy’ to make!)

Their role as Rhaenyra Targaryen in HBO’s hit drama House of Dragon catapulted them to fame overnight.

But in the past five days, it’s Emma D’arcy’s drink of choice that’s really got fans talking on TikTok.

Earlier this week, the 30-year-old non-binary actor –  who uses them/they pronouns – shared their go-to cocktail is a negroni sbagliato during a discussion with Olivia Cooke, 28, in a promotional video for the series.

Sbagliato means ‘mistaken’ or ‘broken’ in Italian, which is a reference to substituting the gin in a traditional Negroni for sparkling wine.

Since it was posted on HBO’s TikTok account on Monday, the clip has racked up over 9.4 million views and prompted intrigued to try Emma’s drink themselves – with one joking that it had ‘cured’ their depression. 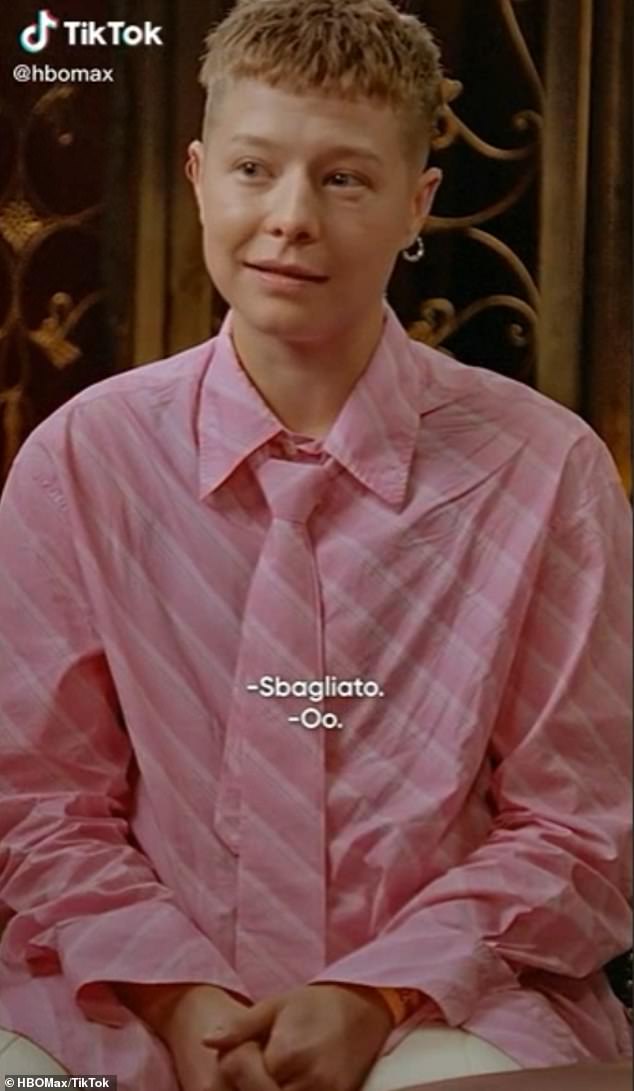 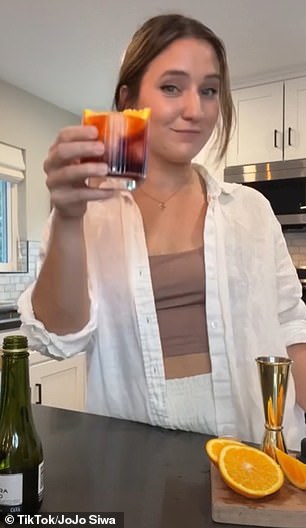 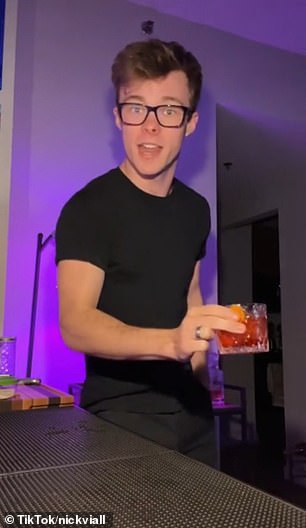 In a quickfire round of questions, Olivia – who plays Alicent Hightower in the Game of Thrones prequel – asked Emma what tipple they reach for on a night out.

‘Negroni,’ Emma said, to which Olivia excitedly cut in with: ‘I was going to say the same thing!’

Finishing her answer, the actor – concealing a smile – added: ‘Sbagliato.’

They then explained that the cocktail is very similar to a normal negroni – which is a mix of gin, vermouth and Campari – but is just finished with a splash of prosecco. 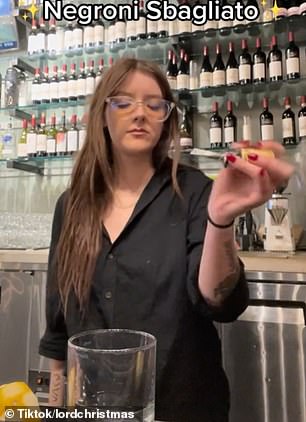 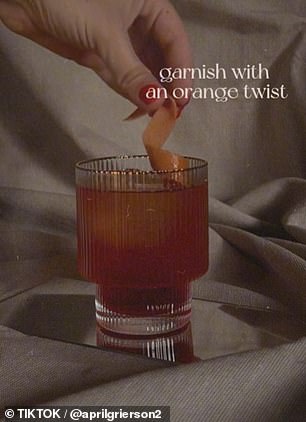 How to make Emma’s viral drink of choice from your own home:

You can make the viral cocktail from the comfort of your own home with this recipe:

Since the clip went viral on the app, a number of TikTok users have been sharing their methods for making the drink.

In a video that’s amassed over 774,000 ‘likes’, cocktail enthusiast Nic Hamilton filmed a himself making the drink – which he said was ‘one of the easiest’ tutorials he’s ever done.

‘Up until about a week ago, every time I ordered one, the whole table would go, ‘oh you fancy man, what’s that?’

‘And I would go, ‘yes I am a fancy man – it’s a negroni sbagliato with prosecco in it.

Meanwhile, lifestyle TikToker @join_jules agreed that the cocktail was ‘super easy’ to make.

After mixing the vermouth and Campari together, Jules toped the mixture with ice and prosecco.

Finishing off with a traditional orange slice, Jules was thrilled with how the cocktail came together.

She captioned the clip: ‘All I want is Emma D’Arcy’s voice and Negroni Sbagliato on repeat…’

Meanwhile speaking to The Guardian, Henry Jeffreys, drinks writer and author of the Cocktail Dictionary, said the drink originally came about by mistake. 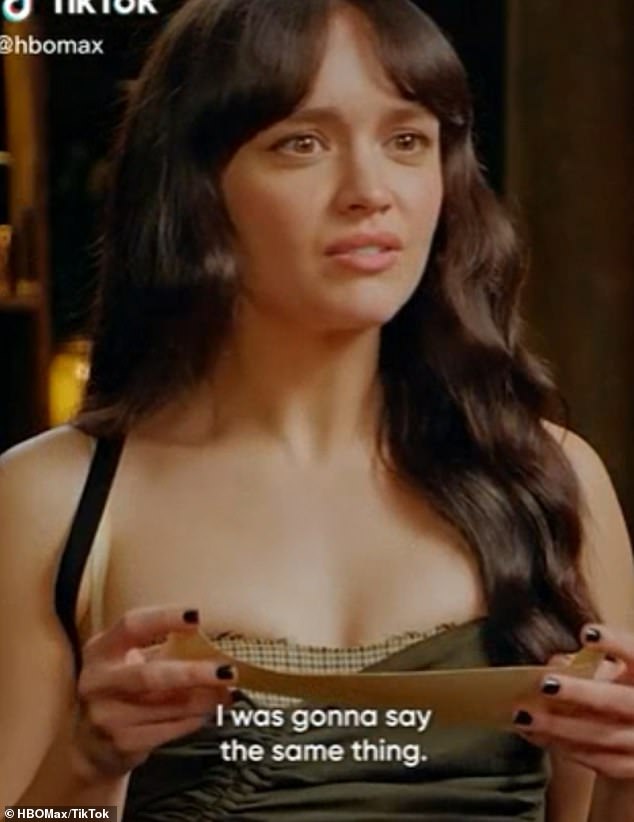 The House of the Dragon star, 30, dubbed the Negroni Sbagliato with Prosecco the new drink of choice in an interview with co-star Olivia Cooke 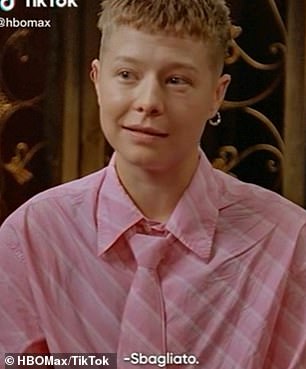 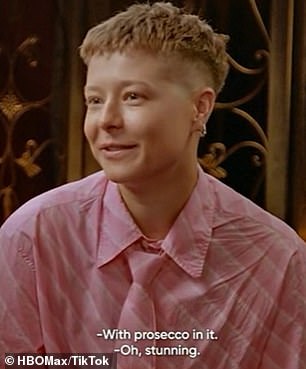 In the interview Emma said they liked their Negroni’s ‘Sbagliato… with Prosecco in it,’ while giving Cooke a flirtatious smirk

He said: ‘Apparently the bartender was meant to be making a negroni, reached for the wrong bottle, and put prosecco instead of gin so ‘sbagliato’ means muddled, or wrong in Italian’.

After the clip went viral, Emma admitted that they were left mortified that the interview had become an online meme.

In an interview with the New York Times, Emma said:  ‘I feel so embarrassed, because in those interviews, when we’ve been at it for six hours, I’m honestly only trying to make Olivia [Cooke] laugh.’

The actor added: ‘I keep thinking I should tell my mom that I’ve become a meme in the hope that she’ll be happy for me, but I’d have to explain what a meme is, and I’ve decided it’s too much effort. ‘

Replying to @kathybudz3255 heres how to make a Negroni Spagliato

You can even make Emma’s drink of choice while tuning into House of the Dragon right at home, with an equal 1:1:1 ratio and a few ingredients.

The first thing you’ll need to do is add ice to your glass and pour in 1.5 ounces of sweet vermouth.

Next, you’ll add 1.5 ounces of Campari and stir it together.

Lastly, top it off with Prosecco, add a slice of orange as a garnish and enjoy the actor’s drink of choice.