The intimacy of radio – and more recently the podcast – is a wondrous thing. The best programs make you feel like you’re eavesdropping on a great conversation. It’s an art perfected by Leigh Sales and Annabel Crabb, whose podcast Chat 10 Looks 3 has 100,000 or so listeners and has spawned a 45,000-strong Facebook community and a series of live events. This month, they have released a new book called Well Hello. 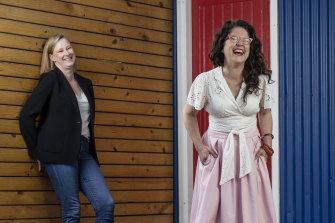 The curiously named podcast – so-called after a song from the musical A Chorus Line – began as a simple recording on a mobile phone seven years ago. The basic premise was to share thoughts about things they’d read, watched, listened to or cooked. Back then podcasts were relatively new; both journalists were slightly concerned about whether people would listen.

The answer is a resounding yes. Chatters, as fans of the show are known, are a committed bunch and have recently shown their support by subscribing to help fund the podcast. Live shows traditionally provided revenue but the pandemic curtailed that.

While skewing heavily to women, the audience is diverse. “We get a lot of correspondence from people who are either shy and introverted and so don’t go out much, or who are sick and confined, saying thank you, you keep me company,” says Sales. “When people see us in real life who are Chat 10 listeners, they greet us like we’re lifelong friends. At the live shows, often at the backstage door people will have dropped off presents or home-cooked things.”

People have even cried with joy to see them. At a live event at Melbourne Convention Centre a few years ago, there was a huge queue of people lined up with books to sign. A young man who looked about 18 or 19 approached Sales and said, “I’m on the autism spectrum and listening to your podcast has helped me learn how to interact with people I would like to be friends with.”

At this point, Crabb interjects, “Although I wonder if he thinks that being like you is a good way to be?”

Cue laughs and general banter. Interviewing them via Zoom feels very much like I am in the podcast. Crabb expands on the idea of a disparate audience, all seeking company. “There’s a definite pattern of people who are alone: long-distance drivers, shift workers, people who commute to regional jobs, people who have recently moved overseas and are homesick, people who have newborn babies, who are up at weird times,” she says. 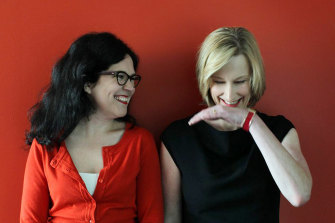 During Melbourne’s lockdown last year, it was next level, says Sales, who was contacted by a number of people saying “you are the person that I have seen the most of in my life”.

“That always feels a privilege but it’s also a big responsibility. It’s touching,” she says.

As the anchor of ABC TV’s flagship daily current affairs program 7.30, Sales is one of the country’s most recognisable journalists. Crabb is also a regular on our screens, with her most recent series Ms Represented devoted to politics from a female perspective. Both have written several books, Sales’ most recent a non-fiction offering called Any Ordinary Day and Crabb’s Men at Work: Australia’s Parenthood Trap.

Almost decade ago, Crabb melded her love of cooking with her political work in the ABC series Kitchen Cabinet, for which she visited an array of pollies in their home kitchens. Food is front and centre in the book and the podcast. There’s a funny section at the back of Well Hello which features Crabb’s recipes “improved” by Sales, often by omitting key ingredients: pea and mint tarts without the peas and the mint, for example. 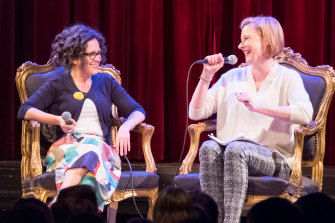 “You might think that is put on or played up but it is absolutely typical. She will enthusiastically ring me up to tell me how she’s made my X recipe so much better,” says Crabb. “I don’t mind the idea of it but do you have to constantly inform me of it like it’s doing me a favour? Feels a little offensive for you to say I put some meat in it and it tastes so much better!”

“But if I try something with bacon, then you’ll know when you’re making it for meat-eating friends,” says Sales with a laugh.

Little-known facts are peppered throughout the book – there’s a Chatters crack, for example, a toffee-like concoction that has assumed cult-like status. Certain expressions work like code: CLANG for name-dropping, for example; don’t even mention the tuba. The podcast’s merch includes fairy wren regalia, including a cross-stitch you can do that reads “please leave by 9pm”. Chatters love to help other Chatters: in an impressive case in point, a pair of glasses made it home from Broome to their NSW-based owner thanks to the group.

The book provides insights into each of the women. Sales is obsessed with music — show-tunes in particular. In one essay, she writes about deciding against music as a career, another discusses her not-giving-a-toss attitude, informed by her grandmother, who regularly said to her as she was growing up: “It’s none of your business what anyone thinks of you.” 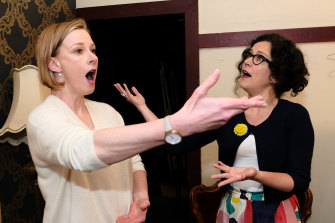 Crabb relies on cooking for her peace of mind, she is not a fan of the list, rarely wears jeans and once met Colin Firth in the toilets at a fancy bar in Soho.

Well Hello was spurred on by the pandemic. While publishers had made approaches in the past, both women had busy, demanding day jobs, family commitments and little spare time. They also travelled for work, but the widespread impact of COVID-19 suddenly left them in a different position. 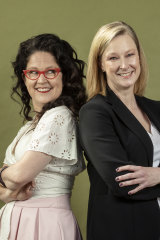 “We thought if ever we were going to do it, now’s the time,” says Sales. Co-written with Miranda Murphy, who writes the Chat 10 newsletter, the book is a strange beast, featuring think pieces, top 10 lists, snippets from the podcast, edited conversations and stories about Chatters and their community. The book is illustrated by Gwen Blake, who has drawn sweet caricatures that appear throughout. “It’s so nice to think that talking about the thing we love to do as a hobby – that is, read – can become something that entertains other people. That makes me happy on such a molecular level,” says Crabb.

Both journalists sound surprised at how much they love the finished product. “Yes, it’s actually turned out quite well,” says Crabb. “Even when we first did the podcast, we both harboured misgivings about whether anyone would listen – because it’s just like this [chat] really, And then when we started doing live shows, it was a bit the same.”

Throughout the interview, there’s lots of the gentle jibing between the two that characterises the podcast. “Sales could not be stopped writing top 10 lists of this that or the other, and, of course, she loves to write top 10 lists of X, Y and Z,” says Crabb. “I am hopelessly indecisive, so it took me about six months to write my top literary works and I refused to put them in order because I would have had an aneurysm.”

While both women have shared interests, their minds work in different ways and they process things differently. It’s a big part of why the podcast works. “Like lots of things, when there’s chemistry, it’s hard to identify why it works,” Sales says.

Apart from similar values, there’s the shared interest in the arts and literature and a love of humour. “Once you move beyond those shared core things, we think quite differently so then it’s fun. Crabb will have a take on something and I’ll be like, wow, I hadn’t thought about it like that,” she says. “This shared foundation that you get on well but then enough difference that you find the other person interesting and you spark off each other.”

For Crabb, authenticity is one of the key ingredients of the podcast, which happens to be why they both love making it. “We’re not trying to create a persona or even a particular outcome; it happens organically. It’s just us: we don’t have to cater for anyone else and that authenticity is probably what makes it fun to listen to, even when it goes completely pear-shaped. And especially then.”

Well Hello: Meanderings from the world of Chat 10 Looks 3 is published by Penguin.

Part of the appeal of Chat 10 Looks 3 is its meandering nature. The following exchange, taken from our interview, gives an insight into a conversation between Crabb and Sales.

Sales: I just looked up and caught a glimpse of us [on Zoom] and thought, that’s it in a snapshot, look how different we look to each other. Everything about us is quite different and yet complementary. It’s weird.

Crabb: Are you saying I look like a freak?

Crabb: This from a woman who wore a moustache on stage at the Enmore Theatre and fishnets a la Freddie Mercury.

Sales had gone to Sexyland to get them – for a Chat 10 live event – and dragged an old friend along with her. “It was good to go in there and have a sticky-beak. It was like the Bunnings of sex toys, everyone is in Bunnings-style uniforms. They just normalised it.”

Crabb recalls a conference she attended recently about women being treated for breast cancer, “which can have really big effect on your sex life, and the oncologist on the panel said Sexyland – or sex shop staffers – are often really, really good at advising people who are going through treatment about what they can do. It made me think, good on you, Sexyland.”

It’s exactly the sort of digression that makes the podcast appealing. The main conversation might be about the latest book they’ve read, or the Netflix series they’re obsessed by, or the musical Hamilton (Sales) or chef Ottolenghi (Crabb), but it will meander along to embrace a range of other topics, potentially including Sexyland providing a community service.