Home » Lifestyle » ‘I am so grateful to the fans’: Curtain call for Yellow Wiggle Emma Watkins

Emma Watkins has announced that she’s hanging up her yellow skivvy and unclipping her bow, leaving The Wiggles after more than a decade of performing with the band.

The 32-year-old, who grew up with the Wiggles as a child before coming to know the performers as adults, colleagues, and mentors, said she was very grateful to have been a Wiggle and will miss the popular children’s entertainment group. 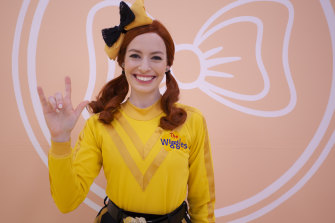 Emma Watkins has quit the group.

“I am so grateful to the fans and I have received so many messages this morning which I didn’t realise would happen,” she told Nine’s Today show.

“I am incredibly grateful for the Wiggles for giving me an opportunity,” she added, crying.

She said she will leave the group to spend more time with her family and focus on the research she has been pursuing through her PhD.

“We had such an amazing time on tour and learning from the OG [original] Wiggles. I am about to finish a PhD and the research is really important for me to bring to the community. Hopefully, really soon … that is really where this has come from.”

Ms Watkins will leave the Wiggles at the end of the year and be replaced by 16-year-old dancer Tsehay Hawkins.

The Wiggles were formed in Sydney in 1991. The group has gone through various iterations, toured all over the world, and been inducted into the ARIA Hall of Fame.