When the office of Idaho Gov. Brad Little (R) first prepared a statement on a controversial bill to amp up efforts to kill and trap wolves earlier this year, his staff included an assurance: “Idaho has no interest in decimating our wolf population in the state.” It also acknowledged that “wolf management is a polarizing and emotional topic for many.”

But they ultimately slashed those lines from the statement, according to documents HuffPost obtained through public records requests. Instead, the governor’s office praised the bill for trying to “address conflicts that negatively impact our wildlife populations and severely harm Idaho’s agricultural industry.” Little signed the bill on May 6.

Critics have called the Idaho bill a plan for “wolf decimation,” accusing its Republican champions in the legislature and the state’s ranching industry of orchestrating a slaughter large enough to land the animals back on the endangered species list. That the governor’s office considered playing down those concerns, but ultimately did not, is certainly not a good sign for folks looking to protect wolves.

“It’s disappointing,” Andrea Zaccardi, a lawyer with the Center for Biological Diversity, told HuffPost. “It just shows the governor is committed to appeasing the special interests, such as the livestock industry, at the expense of those who value the state’s native wolves and their role in creating and maintaining healthy ecosystems.” 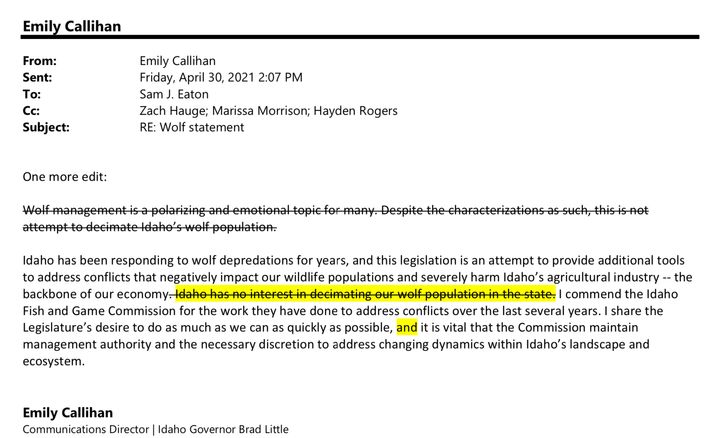 The Idaho Governor’s Office did not respond to requests for comment.

The messaging adds a new dimension to the debate over what the new law will mean for Idaho’s most controversial predator.

The bill attracted wide attention, with opponents saying it would lead to the killing of as much as 90% of the state’s 1,500 gray wolves, a figure frequently cited in news reports. The bill removes restrictions on the state’s already very liberal hunting and trapping regulations, and lets people contract third parties to kill wolves. It also allows hunting wolves at night and by motor vehicle, and removes the limit on the number of wolf tags hunters and trappers can buy.

Opponents say the changes will result in a cull pushing wolf numbers down to the bare minimum specified in the state’s management plan ― about 150 wolves.

But the Idaho bill says nothing about what percentage of wolves to kill. And state officials, including those who supported the bill, have a strong disincentive to kill off that many.

Western states fought lengthy legal battles to take over management of wolves, after the U.S. Fish and Wildlife Service reintroduced them in 1995. A 90% cull would likely push Idaho’s wolves back under federal protection under the Endangered Species Act.

Even if Idaho officials wanted to kill that many wolves, it’s not clear they could. Ranchers can already kill wolves that menace livestock without a hunting tag or a trapping license. Before the bill passed, anyone could buy up to 15 tags to hunt wolves at $13.50 a piece, along with another 15 to trap them.

But wolves are intelligent predators that routinely roam more than 20 miles a day, often at night. The vast majority of people that try to hunt or trap one fail. 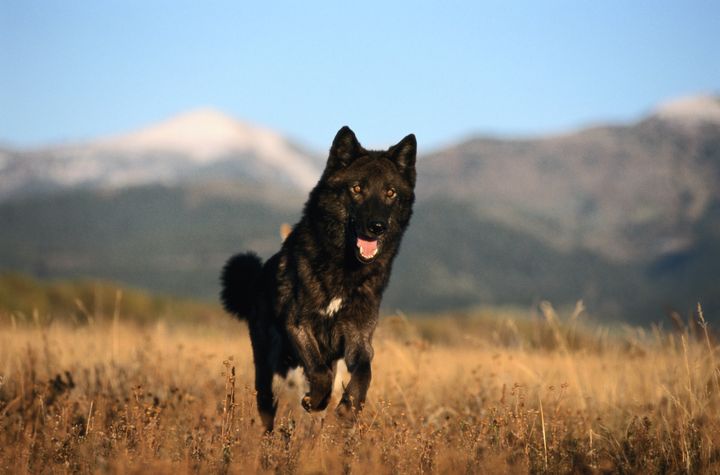 The result is that the wolf population has steadily grown. Hunters and trappers killed a record-number 583 wolves last year, according to Idaho Fish and Game Department spokesman Roger Phillips. That number, however, fell shy of the roughly 40% mortality needed to keep the population in check, he said.

“It was a stretch at best to say that the state of Idaho’s goal is to remove 90% of the wolves,” Phillips said. “We manage them just like we do mountain lions and black bears. We don’t have a specific number we’re aiming for with any of our predators.”

While the new law’s practical impacts remain to be seen, legislators drew criticism for snatching wolf management away from the state’s wildlife officials. Thirty former wildlife managers wrote a letter in April to Little asking him to veto the law. Idaho Fish and Game Director Ed Schriever opposed the bill in an April 22 letter saying state law “expressly reflects that it is inconvenient and impractical for the Legislature to administer Idaho’s wildlife policy.”

In the United States, wildlife is considered a public trust, managed mostly by state agencies. It’s common, however, for legislators in conservative states with prominent ranching lobbies to push laws that target predators, boost private hunting operations or blur the lines between wildlife and livestock. States with strong liberal constituencies routinely manage wildlife through plebiscites that tend to favor predators like black bears, mountain lions or wolves.

As many as 2 million gray wolves lived across most of the United States before European colonization. Their numbers first nosedived in the late 19th century, when commercial hunters decimated the wild deer, elk and buffalo populations that are prey for the wolves.

In the early 20th century, as ranching spread across the West, the federal government led poisoning campaigns against wolves and other predators to protect livestock.

That legacy of conflict between wolves and ranchers remains in states like Idaho, where cattle outnumber the state’s 1.7 million humans. Ranchers there raise another 200,000 sheep. Little, the governor, comes from a ranching family.

Opponents of the wolf bill say ranchers overstate the toll predators take on livestock, often pointing to depredation statistics. USDA’s Animal and Plant Health Inspection Service investigated some 205 suspected wolf depredations over the last year, confirming about half of them, according to its Idaho Wildlife Services Director Jared Hedelius. That’s amounts to well under a tenth of a percent of the state’s combined cattle and sheep. Depredation investigations dropped compared to the year before.

“Those aren’t opinions,” Hedelius said. “Those are actual numbers.”

But ranchers say the biggest hit to their bottom line comes not in the form of dead livestock, but from wolves pushing herds around, causing them to exercise more, gain weight slower, and driving down fertility as stressed out animals miscarry more often.

“We have members that tell me their Forest Service lands used to be their most productive lots, and now they’re the least,” said Chyla Wilson, spokesperson for the Idaho Farm Bureau Federation. “It’s not just kills ― it’s these other factors. There’s just too many wolves.”

While Hedelius couldn’t quantify the problem, he said he hears the same concern from ranchers. “A lot of livestock producers would rather see 10 lambs dead than 1,000 of them come in underweight,” he said. “The concern is very real.”

Wolf advocates would like the state to invest in nonlethal deterrents instead of trying to shrink the animals’ numbers. Some methods, like electric fencing, are effective for animals that cluster together, like bands of sheep, but less so for cattle spread across large landscapes. The best deterrent is greater human presence on the landscape, since North America’s predators universally fear humans, Hedelius said.

Another Round Of Legal Backlash

Idaho’s legislation may backfire. A coalition of more than 50 environmental and animal rights groups filed a petition last month asking the U.S. Fish and Wildlife Service to reclassify gray wolves in the Northern Rockies as a threatened species under the Endangered Species Act. The 2009 rule delisting gray wolves in the area that includes Idaho requires the agency to review wolves’ status if a change in state law or management would significantly threaten the animals’ population.

Some of the same groups have asked the U.S. Forest Service to ban wolf hunting on its Idaho wilderness areas, citing the legalization of contract wolf killing. Federal law restricts commercial activities in designated wilderness areas.

The U.S. Fish and Wildlife Service has not taken a position on the Idaho wolf law. It has three months to respond to the petition.