On a recent wintry morning, farmer Paul Porter surveyed a dying stand of grey box trees lining Mirrool Creek that meanders 15 kilometres through his “Mywurlie” property near Booligal in the NSW Riverina. 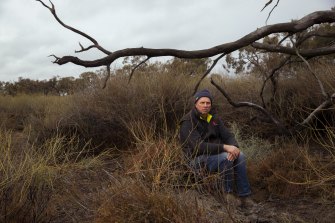 Paul Porter, a fifth-generation farmer, sits under a dead grey box tree amid indigo bushes and lignum in part of the Mirrool Creek on his property in the Riverina.Credit:Dominic Lorrimer

The area, described unflatteringly in an 1896 Banjo Patterson poem as “worse than hell itself”, supports grazing and crops like barley and wheat. And when the water flows, birds such as mountain ducks and endangered Australasian bitterns fly in, while turtles, snakes and fish flourish.

Nowadays, though, flows typically only reach Porter’s 12,000 hectare spread when the Barren Box Swamp – formally converted into a “storage” area by the NSW government in 2005 – gets too full for its operators, the Murrumbidgee Irrigation Area, to handle.

“At the moment they just harvest, harvest, harvest, and then when they’ve got too much they just flood us out,” the fifth-generation farmer says. “They put deep water over pretty fragile country at the wrong time of the year. They scar the country and it could be buggered for five or 10 years after it.” 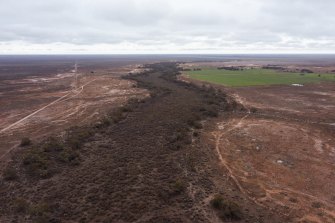 Mirrool Creek runs 15 kilometres through Paul Porter’s property – at least when water is released from a dam upstream.Credit:Dominic Lorrimer

The creek is just one of many that make up the Murray-Darling Basin, the million-square kilometre swathe of eastern Australia that also serves as the nation’s most important food bowl. Governments have spent about $9 billion of the $13 billion plan earmarked to rescue the region after a century of excessive extraction.

But with three years to go until the beginning of a major review and reset of the Basin Plan, farmers along Mirrool Creek are wondering why their watercourse and the Lachlan River downstream should be allowed to wither.

“Why is this environment any less important than another?” Porter asks. 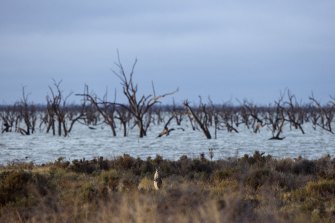 Dead trees in what was known as Barren Box Swamp before its name was changed to a storage, and its water used for nearby farms.Credit:Dominic Lorrimer

An opportunity to air such questions arose this month during a two-day conference hosted by the Murray-Darling Basin Authority at nearby Griffith. The agency, overseeing the Basin Plan’s implementation, notably picked the town for its inaugural annual event dubbed “River Reflections” near the site of infamous burning of copies of the plan guidelines in 2010.

That fiery event, which included a stuffed horse-head being thrown at then authority chair Mike Taylor, “scarred this organisation”, a senior MDBA official said on the sidelines of this month’s gathering. This time around, with good rains and a bumper season in prospect, farmers were probably “too busy on the tractor, making money” to complain, said the official, who was not authorised to comment publicly. 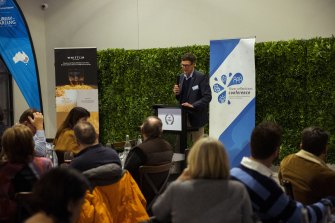 ‘We have a problem’: Sir Angus Houston, chair of the Murray-Darling Basin Authority, addresses the River Reflections dinner at Whitton in the Riverina.Credit:Dominic Lorrimer

As multiple speakers at the conference sought to make clear, the rivers – particularly in the southern basin region spanning Victoria and NSW – are on a drying track as a warming world makes notoriously variable rainfall even more so.

“We all know, I think, that inflows into the river system, have reduced 51 per cent over the last 20 years, when you compare that with the [previous] 100 years,” authority chair and former defence forces chief Sir Angus Houston told attendees. “So things are not looking good in terms of where the trends are going.”

Houston, who emigrated from Scotland to work as a jackaroo into Western Australia in 1968 before drought spurred him to join the airforce two years later, says the June 2024 so-called reconciliation of the Basin Plan and reset by 2026 will inevitably stoke concerns about further water savings to come.

“It’s all coming up fairly rapidly. I know there’s a lot of concern in the room about what happens at that stage,” he told the conference dinner in Whitton. Listeners should “focus on the whole basin”, he said, and concluded, “the challenges you face are pretty severe going forward”.

Inflows to the basin vary. The north endured its worst drought on record until rains returned last year but its longer-term trend has not been as clear-cut as the south. 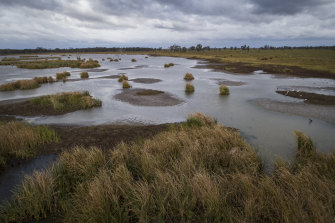 NSW government documents, though, show climate scientists predict that region too will turn drier and hotter. Over the next 40 years, the total volume of water in the Peel and Namoi rivers could drop by average of 47 per cent and 44 per cent, respectively.

Under a dry climate change scenario, there could be no end of system flows for 40 per cent of the time for the Barwon-Darling River, the data shows.

Mark Howden, director of the Australian National University’s Institute for Climate, Energy and Disaster solutions, and a conference speaker, says it will be vital that climate change projections inform the 2026 reset.

“Global climate models are not picking up the changes,” Howden says. “They are underestimating [their] rapidity.” 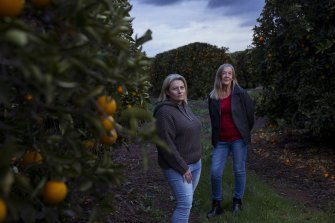 For farmers like Debbie Buller, who sows rice at Murrami, and Jo Brighenti, a citrus grower at Griffith, the conference didn’t tackle the issues that matter to them and wasn’t worth the $80 entry fee.

“We know all these people, we know exactly what they’re saying and they’re not listening,” says Buller, who is also head of Murrumbidgee Food and Fibre.

The separation of water rights from the land, which began in 1994, is having a profound effect on rural industries, particularly as perennial crops such as almonds and walnuts outbid dairy, rice or other producers who squeeze less value from each irrigated drop.

“Water’s going to the people with the deepest pockets and to the most desperate people,” Buller says. “It’s created something like the irrigation hunger games.”

For Brighenti, her family has held off expanding her orange and mandarin orchards that ship fruit to China and elsewhere.

“If I don’t develop I can sell my water in some years for an extraordinary amount, but what’s that do for food security?” she asks.

Meanwhile, she watches as Murrumbidgee Irrigation (MI) opens up land, widening a canal that passes through some of her family’s land.

“They’ve just expanded in our area, adding 8200 hectares of irrigatable land to the MI area, and there’s no extra water to be found for that,” she says. “It’s going to have to come from somewhere else.”

One source of water for irrigators has come from so-called floodplain harvesting, the building of dams or other diversion infrastructure to capture flows during big rain events that send water broadly across the landscape.

Oddly absent from the conference was almost any NSW government presence despite the location of the gabfest in the Riverina. One well-placed source says the government only learned of the event late in the piece, and sent deputy water secretary Jim Bentley as an observer. A parliamentary sitting week would have made it difficult for Water Minister Melinda Pavey to attend.

The NSW government has failed twice to get regulations for such harvesting through that state’s upper house, including last month.

While much of the dam construction has happened in the northern basin, critics say the south is not immune. Farmers, such as Porter on Mirrool Creek, say MI has been harvesting from Barren Box without a licence.

The state’s water watchdog, the Natural Resources Access Regulator, this month said it was re-opening an investigation.

“We understand a complaint has been made and that NRAR, rightly, has an obligation to ascertain whether there are grounds for investigation just as they do for any of the many queries that come their way,” a spokeswoman for MI said. “However, Murrumbidgee Irrigation has not been approached by NRAR in relation to this matter.“

Irrigator groups say they are at the frontlines of those experiencing climate change and trail other priorities such as the supply of town water, the running of the rivers themselves, and stock and domestic needs.

Jeremy Morton, chairman of the National Irrigators Council and a speaker at the Griffith conference, said the projected reduction of inflows was “deeply concerning for everyone”, and further rebalancing of supply “in a vain attempt to maintain a regime for a climate that no longer exists [and is] preposterous”.

Crucial to achieving the Basin’s 2024 goals will be the implementation of 36 so-called sustainable diversion limit adjustment projects that are supposed to free up 605 gigalitres a year by achieving the same environmental goals with less water.

“We do need the projects to be the best they can be but the clock is ticking,” Morton, who is also a director of SunRice, says. “We are running out of time.”

“It is absolutely proving to be as challenging as expected [and] the risk of failure sits wholly with southern basin irrigation communities,” he says.

NSW Nationals senator Perin Davey agrees the region straddling the Murray River in NSW and Victoria has the most to lose.

“The [Murrumbidgee] and Murray Districts are absolutely the most vulnerable if someone comes back with a chequebook,” she says. “The viability of these regions is absolutely at a tipping point.“

Phillip Glyde, the MDBA’s chief executive, says that with NSW in particular struggling to complete its Menindee and Yanco Creek water-saving projects, the Basin’s targets could fall short by hundreds of billions of litres.

“It’s really clear. Unless things change markedly, there’s not going to be 605 gigalitres of projects completed by 2024,” he says. “And nor is there going to be 450 GL worth of on-farm and off-farm efficiencies .”

“As we near 2024, there’s a period of uncertainty,” says Glyde, whose term concludes at the end of 2023. “No one’s going to be sure exactly how government are going to react.” 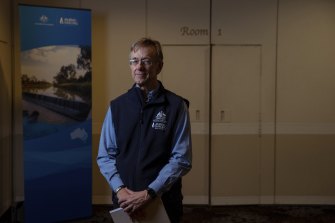 Phillip Glyde, Chief Executive of the Murray Darling Basin Authority, was among those addressing a rivers conference in Griffith on Tuesday.Credit:Dominic Lorrimer

Federal water minister Keith Pitt, who attended the Griffith event with a police detail, says the Morrison government “absolutely ruled out further buybacks” of water to resolve what looks an inevitable shortfall come 2024.

That approach is backed by Claire Miller, chief executive of the NSW Irrigators’ Council.

“Climate change means the rivers of the future will look very different to the rivers in living memory, but the discussion is still too fixated on trying to somehow maintain those rivers of the past at any socioeconomic cost,” Miller says.

“Given the dwindling reliability of irrigation licences, purchasing more licences for the environment means putting communities out of business for diminishing returns to rivers.” 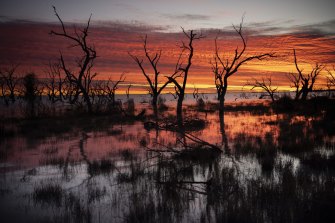 For the first time in five years, the Menindee Lakes system in far western NSW have filled up, but the future of the region remains uncertain.Credit:Wolter Peeters

Jamie Pittock, a professor from ANU’s Fenner School and a member of the Wentworth Group of Concerned Scientists, says the Basin Plan’s 2024 targets have been insufficient from the start to restore the rivers’ health.

The likely delay or failures of key water-savings projects will only make things worse for key wetlands and all the fish, birds and other wildlife dependent on them.

He says the outlook is inevitably grim once you factor in climate change and governments’ reluctance to buy back allocations despite such purchases being shown by the Productivity Commission to be relatively cheap.