Home » Is Traveling With Small Children Worth the Torture for Moms?

Every summer, we’re faced with the same decision: Deal with the whining and boredom at home or take our (sh**)show on the road and try and have a little fun? We usually opt for the latter and our “vacation” always promises to be a debacle that makes us question all our life choices. 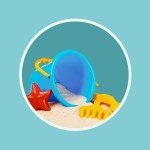 The word vacation implies relaxation and serenity, or, at the very least, the absence of loud, squawking noises. Unfortunately, vacationing with kids promises all of that and more. I am nothing if not a tried-and-true pessimist and when you travel with small children, there is plenty there. But there is also a chance for some unique experiences and maybe even (gasp!) a little family bonding time.

Not long ago, we had three little boys under the age of 5. They were climbing the walls and driving us batty at home, so we decided a drivable beach getaway was exactly what we all needed. So we packed our things and set our GPS for a place we’ll call Dolphin Bay Resort (name has been changed to protect the guilty, i.e. my sons). After several hours cooped up in the car, these kids had loads of pent-up energy, so I took a deep breath of the salty ocean air, hoped for the best, and unleashed them on this poor, unsuspecting beach town.

The next few days were, ahem, memorable — just not in the way I hoped. I soon realized vacationing with young kids means messed up sleep and eating schedules and is essentially just asking them to put on pants in a different zip code.

In my beach fantasies, I had visions of them sweetly building sandcastles and running through the surf holding hands while “The Wind Beneath My Wings” played softly in the background. What I got was overtired and hangry toddlers screaming about sand in their mouths and sunscreen in their eyes and my middle son bemoaning how all this ocean water was making his swimsuit too wet. Meanwhile, my kindergartner kept loudly and repeatedly expressing his displeasure at not being able to ride a dolphin.

Clearly, the beach wasn’t our jam, so we decided to try mini golf. However, the kids seemed to be more interested in using the golf clubs as weapons and kept whining about all the walking. Add mini golf to the list of 948 things that are fun, but my kids don’t like.

I began to realize this is the exact same malarkey they dole out back home, but here the stakes of my sanity are much, much higher because of all the time and money invested so WHY AREN’T WE HAVING THE BEST TIME EVER?! Vacationing with small children just means spending a boatload of money to deal with the shenanigans that I deal with at home for free. And at least there, I have my own things.

On our way home, I felt like I’d just ran 46 marathons. The physical, mental and psychological exhaustion were overwhelming. I turned to my husband and lamented, “Aren’t you supposed to feel relaxed upon returning from a vacation? I need a vacation from our vacation. And perhaps some therapy.”

We arrived home to find an email from the resort saying they had multiple complaints from neighbors about the noise and the smell(!) and that the couch cushions had red marks on them. I guess in hindsight, cherry popsicles weren’t the best choice for toddlers. The best part was it said we were no longer welcome back. I read the email again to let it sink in; because our children are such menaces, we’re now considered personae non gratae at this resort. I didn’t know whether to laugh or cry, so I opted for both, which the kids thought was hysterical, Mommy’s lost it, witness the magic!

Now it was official: The trip was a disaster. This email and visible signs of accelerated aging were my receipt. After paying for the damages and writing a letter of apology to the resort, I vowed that I would never, ever leave the confines of my home with these three again.

A few months later, my aunt called to let me know she was throwing a 90th birthday party for my sweet grandmother and she would like for us to fly in to attend. Memories of the harrowing ordeal at the beach came haunting back as I explained that our last trip has nearly bested me so we would not be coming. But she assured me it would be fine and that they were excited to see us.

I reluctantly booked us tickets to fly back to my home state of Arizona. Needless to say, I was nervous to unleash my wrecking crew on my aunt’s house. Turns out, I was nervous for good reason. We descended on their home in tornado of appalling behavior and infectious disease. Within 20 mins of being there, my middle son accidentally broke an antique, my toddler ripped all the leaves off a plant, the oldest put a tampon up his nose, and the other two were upset because I wouldn’t let them do it, too. Then, I noticed my oldest had some red spots around his mouth, which could only mean one thing (dun-dun-dun!): hand, foot, and mouth disease. If you don’t know what that it is, allow me to explain; it’s a highly contagious disease where you get red sores all over your body. So now, not only had my children systematically destroyed my aunt’s house, but we had also passed along this disgusting disease as well.

You know that old saying about fish and houseguests starting to stink after three days? I think we fell in that category; except for us, it was day one. When my aunt was dropping us off at the airport, I mentioned us coming back for Thanksgiving. She politely smiled, but I could see the fear in her eyes as I told her I would start looking at tickets. I mentally filed this visit in the catastrophe category.

A few days later, I suspect after she had a chance to recover from our visit, my aunt called to say how glad she was we visited and remarked what a joy it was to have us there. I wondered if she and I were talking about the same trip, but then I began to understand what she was saying. The laughter and fun were palpable. The change of scenery was cathartic, and watching my kids witness the majesty of the Sonoran Desert for the first time was beautiful. Seeing my grandmother interact with my kids was heartwarming, and watching all the cousins bond made me downright joyful. There were so many upsides that all the tomfoolery paled in comparison to the cherished memories we made.

I finally have come to accept that chaos is just par for the course when you travel with kids. Sure, there is no shortage of mayhem and some frazzled sanity on these trips; but if everyone comes back alive, and no one needs to be bailed out of jail, I am going to call it a win. It turns out, making lasting memories with family is well worth the price tag of traveling with feral children. So, I guess that means I will be booking a trip for us again this summer. Just not at the Dolphin Bay Resort, apparently.

These toys will keep kids off their screens, whether they’re at home or on vacation.