Kevin the carrot is back: Aldi releases football-themed Christmas ad

Aldi has released a playful Christmas advert, boasting a cast of animated vegetables – including the supermarket chain’s festive regular, Kevin the carrot – playing football in an airport lounge to an Elvis soundtrack.

However, instead of starring famous players like  Ronaldo, this clip features a family of carrots, including Kevin, who is joined by his wife Katie and children Baby, Chantenay and Jasper. 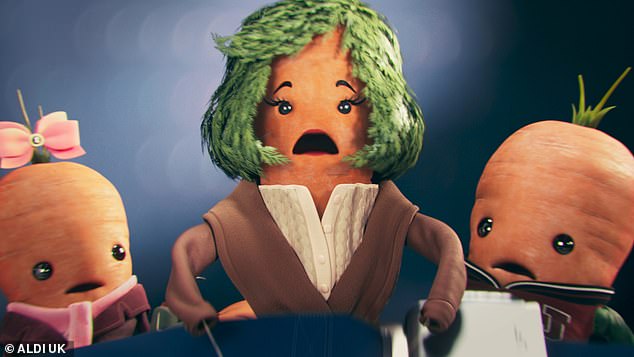 Aldi has released its Christmas advert, which boasts a cast of talking carrots and gives a cheeky nod to the Christmas movie Home Alone 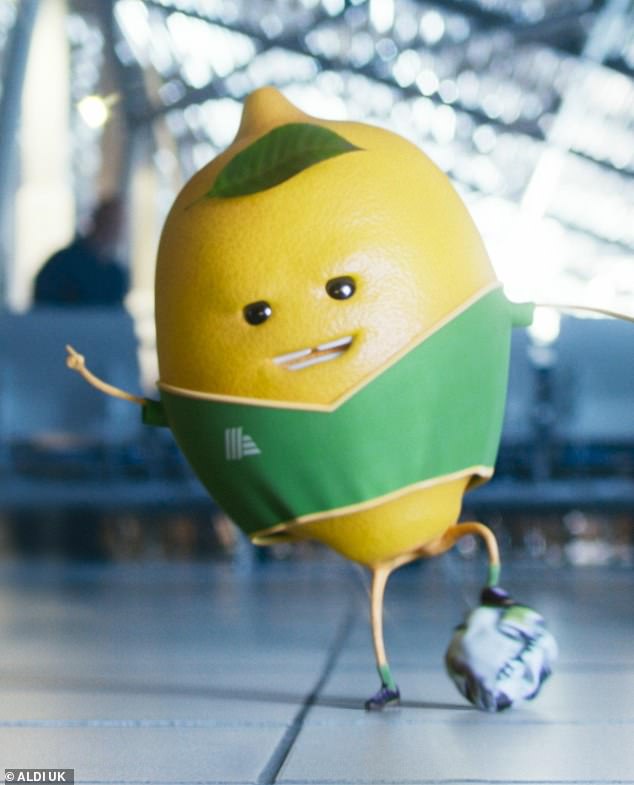 The clip was inspired by Nike’s much-loved Airport 98 advert, which showed famous footballers having a kickabout in an airport lounge 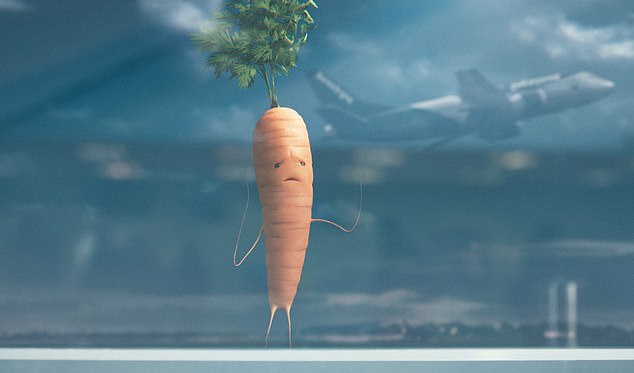 During the 50-second spot, Kevin the carrot (pictured) misses his flight after getting caught up in a game of football

The 50-second ad shows Kevin and his family in the airport departure lounge, preparing for a Christmas trip to Paris.

Kevin is reading a newspaper and expresses his disapproval over holding ‘a football tournament in December’.

He screws up the newspaper then tosses it away, only for some familiar football characters to use it as a football for a kickabout.

The ‘ball’ is picked up by Ronaldi, who passes it to ‘Messy’, who inevitably creates a mess by knocking over cups of coffee as he dribbles with the ball. 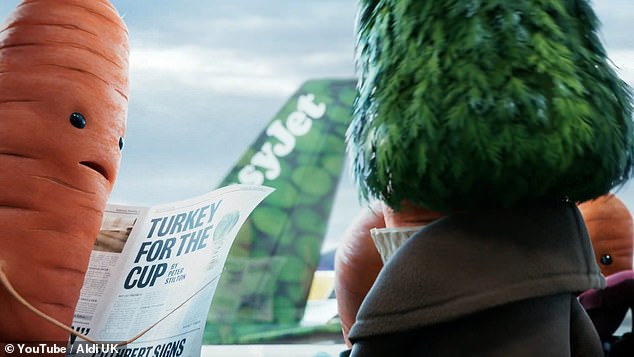 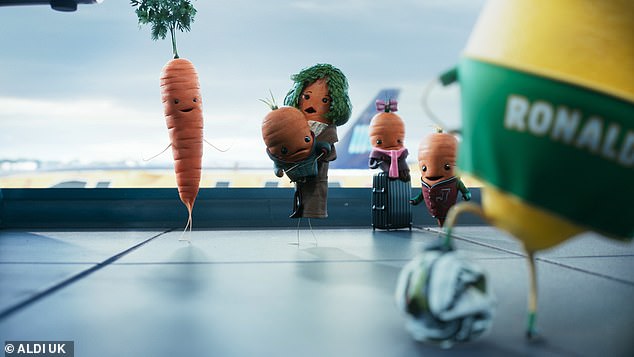 After he screws up the newspaper and throws it away, a lemon called Ronaldi starts playing with the paper ball

It gets passed from Messy to MmmBap to Roy Bean as Kevin tries to keep up – but his fitness isn’t exactly the best.

The game continues and we see Macaroony, Beth Swede and Marrowdona when finally, the ball reaches Kevin, who tries to score a goal.

His shot clips the crossbar (the belt of a security barrier) and hits the departure board as we see the status of his flight to Paris change from ‘Boarding’ to ‘Departed’.

The carrot’s face falls as he realises he has missed his flight. 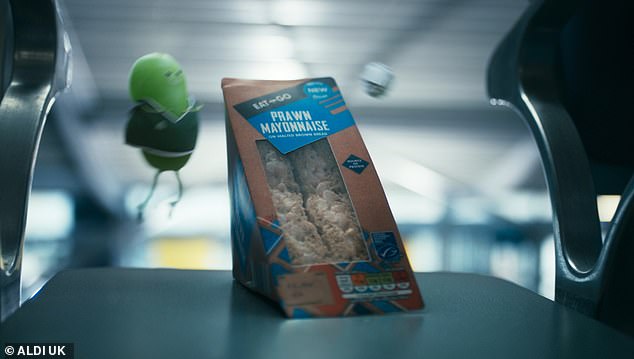 A host of animated fruit and vegetable players are features, chasing the ball through the airport as they enjoy their kickabout 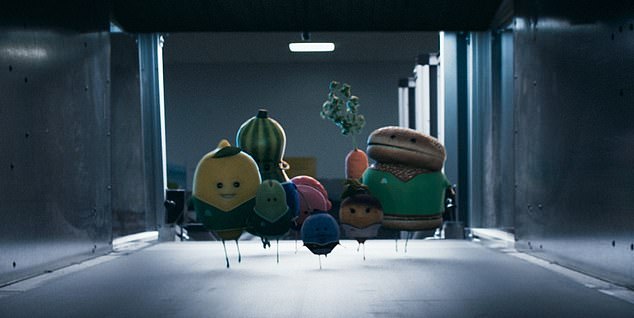 Meanwhile, on the plane, Katie suddenly realises that Kevin is missing, and screams his name, as viewers are left to wonder whether he will be forced to spend Christmas home alone.

Aldi joins other major retailers in launching its festive advert, including Boots, Sainsbury’s, Asda and Lidl.

The It’s A Sin actress is Holly in the advert, where she uses the spectacles to unleash the true meaning of Christmas and find out what her loved ones really want under the tree. 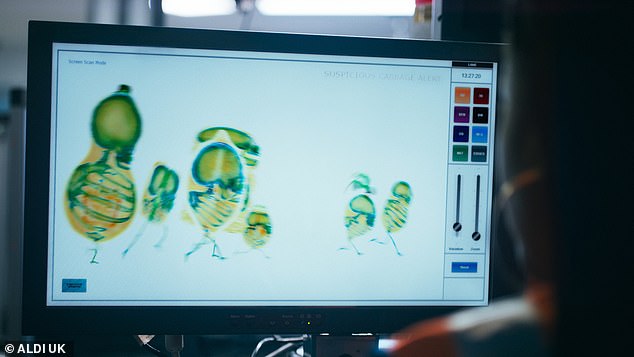 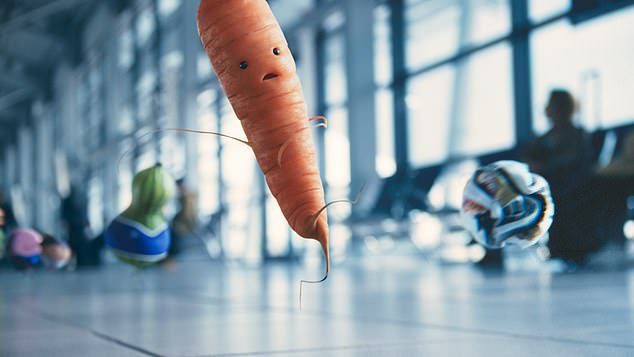 Towards the end of the ad, Kevin has a chance to take a shot at goal – but as he kicks the ball towards the departure board, viewers see he’s missed his flight

Come Christmas Day, everyone is delighted with the personal gifts Holly got them.

The minute-long advert, airing to the tune of Hall & Oats You Make My Dreams Come True, celebrates choosing unique gifts over expensive ones.

Meanwhile Sainsbury’s scored ITV’s sweetheart Alison Hammond for their advert, which is narrated by Stephen Fry and where she plays a demanding Countess who doesn’t like Christmas pudding, but is swayed by the supermarket’s recipe.

Asda landed a Hollywood star for its advert, hiring Will Ferrell to reprise his role as Buddy, from the Christmas classic film Elf.

And Lidl took the heartfelt route with a sweet spot telling the emotional story of Lidl Bear, a toy with its own Christmas sweater who struggles with unexpected fame but eventually learns what’s really important.