The Liberal Party looked set to win a handful of seats from Labor, two hours after the polls closed on Saturday night, partially offsetting the loss of seats to the ALP and the teal independents.

With about 15 per cent of the national vote counted, the Coalition looked set to retain Bass and Braddon in Tasmania, as well as potentially gaining Lyons in Tasmania. It was ahead of Labor in the New South Wales target seat of Gilmore. 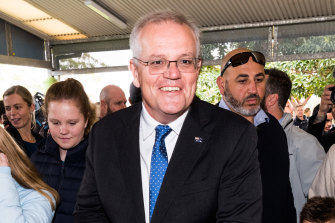 On election night, it appeared the prime minister’s focus on the outer suburbs – a strategy designed to offset losses closer to the CBD in the major capital cities – could partially offset losses elsewhere, with a hung parliament a distinct possibility.

The Liberal-held seat of Bennelong, once held by Prime Minister John Howard, was teetering on the brink and the Liberals’ hopes of retaining Chisholm, in Victoria, were looking shaky.

The Coalition was also trailing in seats it needed to retain including Reid and Robertson in New South Wales, and its chances of winning Parramatta and McEwen from Labor were fading.

In Queensland, the seat of Brisbane was trending towards being a Labor gain, Defence Minister Peter Dutton’s seat of Dickson was on a knife edge, and the Liberals had their nose in front in Longman.

Further complicating the picture, the teal independents were performing well though it was too early to call a result. In New South Wales, the seats of Wentworth, Mackellar and North Sydney were all in play and looked set to go down to the wire.

In Victoria, the teals’ two main targets – Kooyong, which is held by Treasurer Josh Frydenberg and Goldstein – were in play too, though it was too early to call.

“Initial discussions about whether we might see seats changing hands in both directions are looking [correct] …that might well be the case tonight,” Liberal frontbencher Simon Birmingham said.

He added that the Liberal Party looked set to pay the price for preselecting controversial Warringah candidate Katherine Deves, with her selection having a “contagion effect” on nearby seats where the teals were challenging strongly.

Labor education spokeswoman Tanya Plibersek said results were looking good for Labor “in seats like Banks, Bennelong, Reid, maybe both Chisholm and Deakin in Victoria… we are talking very early results at this stage, but that gives me a little bit of hope”.

There were insufficient votes counted in the South Australian seat of Boothby, and in Swan, Pearce and Hasluck in Western Australia, to project whether the Coalition would retain them or if they would fall to Labor.

In the final week of the election campaign, Morrison visited four housing estates in the outer suburbs in Blair (Queensland), Lingiari (NT), Corangamite (Victoria) and Pearce (WA) to highlight the government’s plan to allow first home buyers to use up to $50,000 from their superannuation fund to help buy a house.

The Coalition started Saturday night with a notional 76 seats, the minimum needed to form majority government, while Labor was on 69 seats and there are six members of the crossbench.

The Prime Minister focused his campaign on outer suburban marginal seats, in part, to offset expected losses in traditional Liberal heartland seats being challenged by the teal independents, in seats including Kooyong and Goldstein in Melbourne, and North Sydney and Wentworth in Sydney.

Cut through the noise of the federal election campaign with news, views and expert analysis from Jacqueline Maley. Sign up to our Australia Votes 2022 newsletter here.