Home » Lifestyle » Macquarie’s word of the year: Time to strollout the winner

We came; we saw; we strolled out. After two hours of debate, we had a winner, the Macquarie Dictionary word of 2021. And for once, unlike cancel culture (2019) or fake news (2016), it was one word. The tribe had spoken. The committee had a bright new compound to announce, but not yet. It wasn’t a race after all.

Best to wait, said the dictionary’s publicist. Keep the announcement on ice for a few weeks, the better for punters to assess the shortlist in the interim, without the bias of knowing how things were seen by the so-called experts. So it was that strollout – our pick – fell victim to its own strollout, which felt perfect. 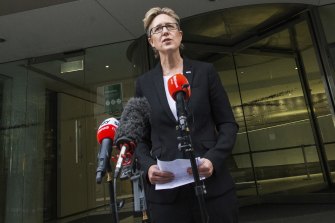 ACTU’s Sally McManus popularised the Macquarie Dictionary word of the year in May, but she later credited a colleague.Credit:Paul Jeffers

For those unfamiliar with the term, welcome to Australia. (Those flight bubbles must be working.) The label applies to the Coalition’s tardy delivery of vaccines, putting the amble in ambulance, tackling the nationwide operation with a baffling nonchalance, as reported around the world.

Sally McManus, secretary of the Australian Council of Trade Unions, popularised the neologism in May, tweeting: “We don’t have a vaccine rollout, we have a vaccine strollout.” Headline writers pounced, as the parish pump approved.

McManus later credited her colleague, Liam O’Brien, as the word’s hatcher, as part of an internal ACTU meeting. Her later tweet clarified: “We were discussing our frustration at the lack of urgency from the Morrison government to vaccinate aged care.”

Whoever did the coining, the snub found currency. At contrary speed, strollout hastened onto the Macquarie’s longlist, then the shortlist, and finally atop the 2021 podium, though we sat on the news, for publicity’s sake.

Only to be gazumped a week later, on November 17. Just as Parliament is dominated by two parties, so too is Australia’s lexicographical territory. I’m not saying the Macquarie equates to the Libs, but I can say the National Australian Dictionary stole our bloody thunder, announcing their own word of the year, which was ours.

That’s right. Theirs was strollout too, along with net zero, AUKUS and double-vaxxed. Maybe we should have been quicker to seize the limelight. Every year, as new words are sifted, the neologism rollout is all about timing and announcements, much like politics. But then the insight struck me. Walking in parallel, the country’s two dictionaries had reached a rare consensus, making strollout a bilateral triumph. Who says word-nerds can’t agree?

Believe me, we often don’t. Hence the hullabaloo of the annual powwow, speaking as one participant on the Macquarie’s latest Zoom. Afloat on the same screen were the dictionary’s two reps – Alison Moore (chief editor) and Victoria Morgan (managing editor) – plus Kim Scott (Noongar novelist and academic), Nick Enfield (professor of linguistics at Sydney Uni) and Tiger Webb (language research specialist at the ABC).

Over two hours, we scrutinised 16 categories, from Ag to Tech, finding love for brick-bait (incitements to return to physical shopping), sober-curious, hate-follow, wokescold (to rebuke for insensitive behaviour) and porch pirate (a package-pinching felon who could well serve as brick-bait).

In Politics, coal-hugger and front-stab did well, yet both proved toast in the all-consuming blaze of strollout. The year had a winner, the bolter of 2021, which we’d delayed on advice. Because let me assure you, as a humble selector of neologisms, when it comes to press releases, I don’t hold the prose.