This Morning viewers were baffled by the story of a man who took his stuffed dog on holidays and how he had found love during lockdown.

Mitch Byers, 31, from Portland Oregon, went viral in 2017 after sharing a picture of his stuffed family Jack Russell Phoebe who he would take on vacation with him and share photos online.

Speaking on the morning show, the viral sensation told Phillip Scholfield and Holly he had found love with Jamie, who owns a Husky named Nanook, after he put a snap of Phoebe on his dating profile.

Jamie admitted she thought Phoebe was ‘hilarious’, but had to make sure Nanook doesn’t attack the stuffed dog because she ‘doesn’t need to die twice.’

Viewers were ‘intrigued’ by the taxidermy segment, and concluded that the saying ‘there is a lid for every pot’ is true. 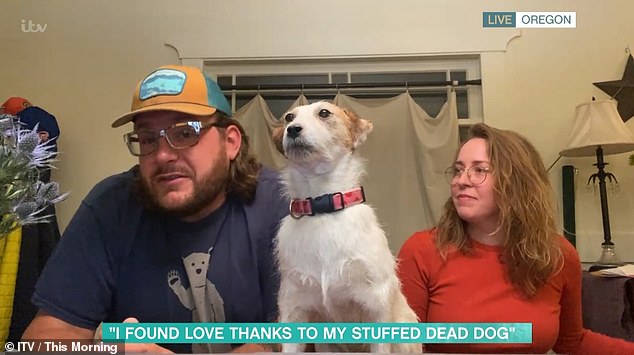 Mitch Byers, 31, from Portland Oregon, went viral in 2017 after sharing a picture of his stuffed family Jack Russell Phoebe and revealed on This Morning he’s now found love with his girlfriend Jamie, pictured

Some people said they were not into the idea of Mitch bringing the stuff dog everywhere with him, but other said there was a lid for every pot

Speaking on the show, Mitch revealed he put a picture of Phoebe on his dating profile, and admitted he was met with mixed reactions.

‘So many mixed reactions, some people thought it was cruel, most people did think it was pretty hysterical. It’s always a mixed bag of reaction, especially so in social dating when you advertised your taxidermy dog,’ he said.

But Jamie was not deterred by the picture of Phoebe, and the couple started talking.

‘At first I wasn’t sure if it was a dead dog or a live dog, she was cute either way,’ she said. 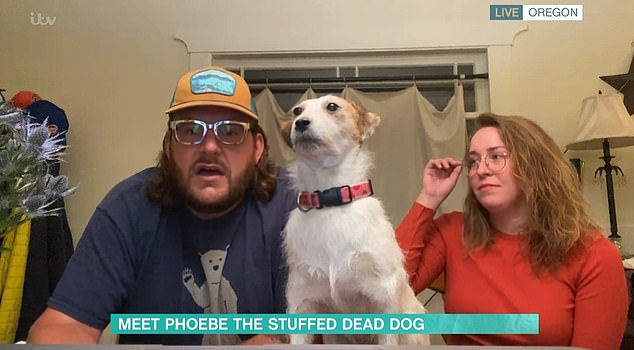 Jamie, pictured right, said she didn’t know whether Phoebe was alive or not the first time she saw her 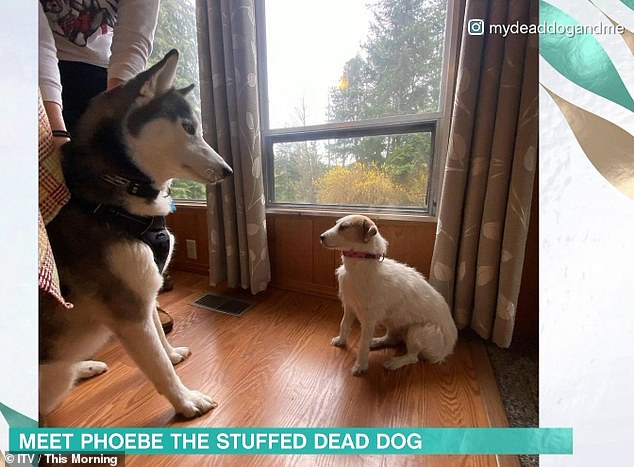 Mitch revealed Jamie’s Husky, Nanook, pictured, had to be supervised to make sure he didn’t tear Phoebe up

‘Once I realised she was stuffed I thought it was hilarious,’ she added.

‘Dating during lockdown you had to be selective with who you were going to be spending time with,’ she added, explaining she decided to spend more time with Mitch during this time.

‘So you picked the guy with the stuff dead dog,’ Phil joked, with Jamien retorting; ‘I thought it’d be entertaining.’

The couple spoke about their first date and how Mitch introduced his stuffed dog Phoebe to Jamie’s very much alive Husky.

‘Nanoock, my girlfriend’s dog was super curious, didn’t know if it was a stuffed dog or a real dog, didn’t know really what the situation was,’ Mitch said.

‘Every time they’re together, they have to be supervised to make sure no funny business happens.’ 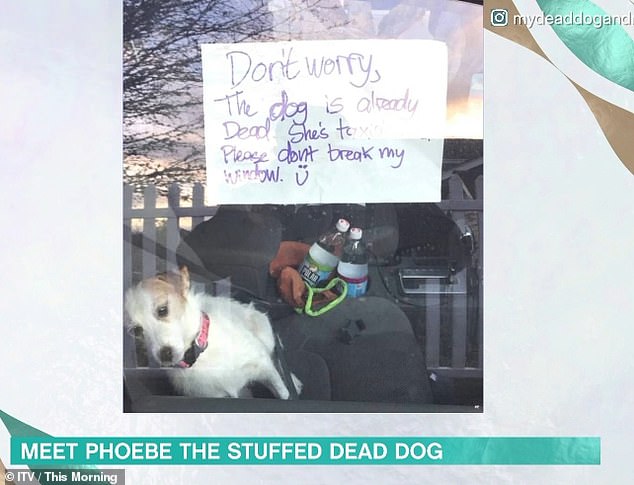 Mitch went viral in 2017 after sharing a picture and a note on his window reading ‘don’t worry, the dog is already dead. She’s taxidermised. Please don’t break my window’

‘Nunuk is a husky and they’re big dogs, if it thought for whatever reasons that Phoebe was a toy, there’s possibility it could end very badly, Jamie,’ Phil said.

When she was asked by Holly whether she’d consider stuffing Nanook once the dog passes away, Jamie said she was ’50/50.

‘I had thought about this a lot, my mother always joked about stuffing our childhood dog,’ she said.

This prompted Holly to say: ‘You’ll need a big freezer,’ which sent the two presenters into a fit of giggles. 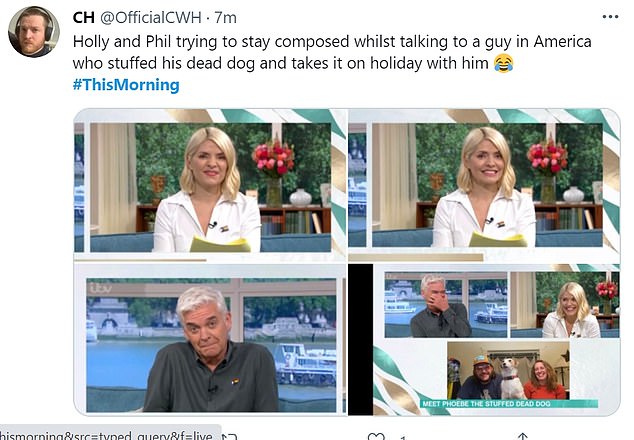 People were not convinced by Mitch’s story, but some said they were ‘intrigued. Other found Phil and Holly’s reaction to the story funny

Mitch explained it was his mother who stuffed Phoebe after she died in 2013, which  came as a surprise to Mitch and the rest of the family.

She had to keep the beloved animal in a freezer for two months until she was ‘rock solid’ so that she could be stuffed, he explained.

The son revealed he found his mother’s idea ‘hysterical’ because they shared the same sense of humour.

Phoebe’s owner went viral in 2017 after sharing a picture of Phoebe in his car, with a note on the window. 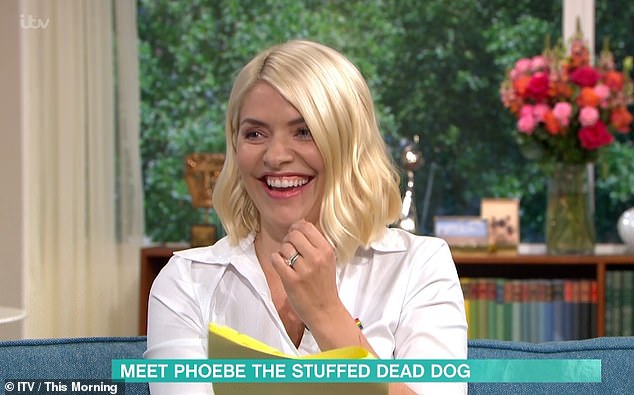 Holly, pictured, joked that Jamie would need a ‘big freezer’ if she wanted to stuff her Husky dog Nanook

The 26-year-old rubber factory manager had put a sign in the window that read: ‘Don’t worry, the dog is already dead. She’s taxidermied. Please don’t break my window.’

After that, going through a bad break up, he started to share more and more pictures of Phoebe with him on vacation, taking her with him whenever he went.

He set up an Instagram called ‘My dead dog and me’ after the picture went viral, and now has over 6,000 followers.

Mr Byres posted pictures of Phoebe ‘helping’ with Thanksgiving dinner, clad in a Christmas hat and dressed up for Halloween.

He even posted a video of the Jack Russell sitting on top of a toy train set going past the families Christmas tree – complete with Santa hat and jacket. 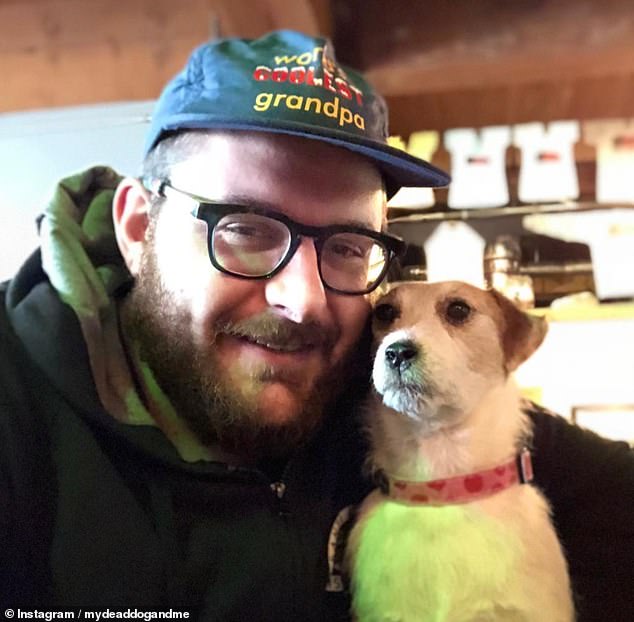 Mitch has gone viral sharing picture of Phoebe and taking her on his travels around North America, pictured 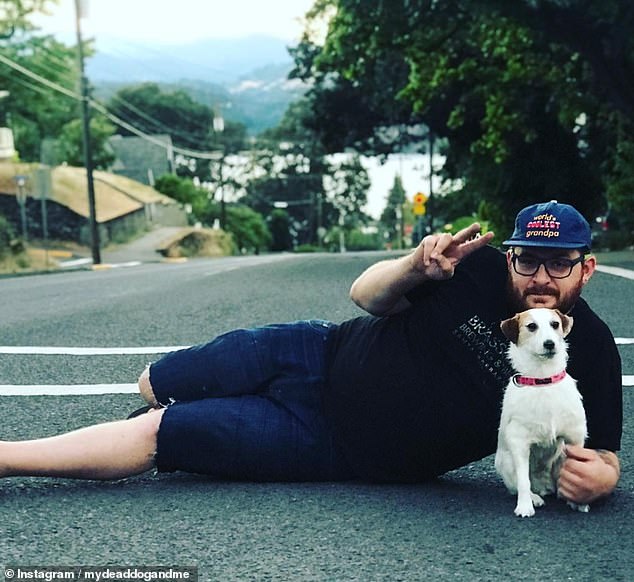 The viral sensation from Oregan said he gathered mixed reactions, with some saying stuffing Phoebe was ‘cruel’

Mitch also took Phoebe into a bar one day in Oregon, and snapped a selfie with her and a pint.

The pair’s adventures have stirred a mixed reaction among social media users, with many fawning over the dead dog.

The This Morning were not convinced about Phoebe’s story, but they concluded the saying ‘there’s a lid for every pot’ was true.