Marcus Wareing makes bangers and mash ahead of tonight's @MasterChefUK

Are YOUR bangers and mash good enough for MasterChef: The Professionals? Judge Marcus Wareing reveals the classic dish is the first skill test on tonight’s new series (and how to perfect the meal in 20 minutes)

Chef Marcus Wareing has revealed how to make perfect bangers and mash ahead of MasterChef: The Professionals’ return tonight.

The popular show kicks off a new series on BBC One tonight at 7:30pm, with Marcus returning to judge alongside Gregg Wallace and Monica Galetti.

The Michelin-starred chef picked the new series’ first skill test and demonstrated what he was expecting from this year’s contestants.

He showed how to make scrumptious bangers and mash, adding his own flair with a flambéd stout gravy.

He explained that while the meal was a classic, it demanded many technical skills in order to complete in just 20 minutes. 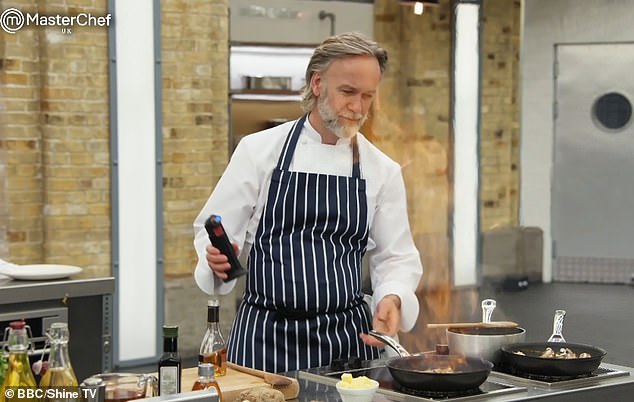 Marcus Wareing, pictured, demonstrated how to make perfect bangers and mash on tonight’s new series of MasterChef: The Professionals 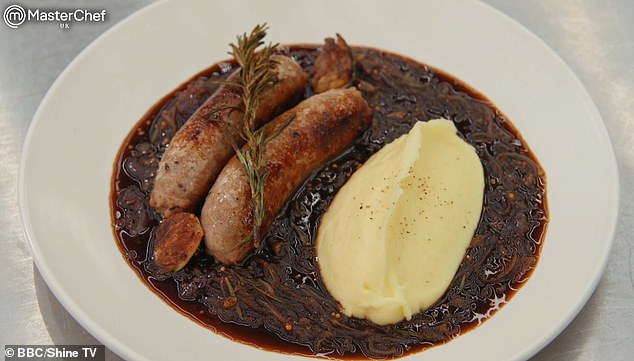 The chef, who returns to judge alongside Gregg Wallace and Monica Galetti, said the meal, pictured, was a classic, but also demanded a lot of skills

‘The first skill test is bangers and mash with an beer and onion gravy. Great British classic,’ Marcus told Gregg and Monica.

The chef started with the gravy, pouring the stout in a deep pan.

‘First job I’m gonna start the beer and onion gravy. And I’m gonna use a stout for my sauce. Nice, bitter stout,’ he said.

He then chopped white and red onions while the stout was reducing. 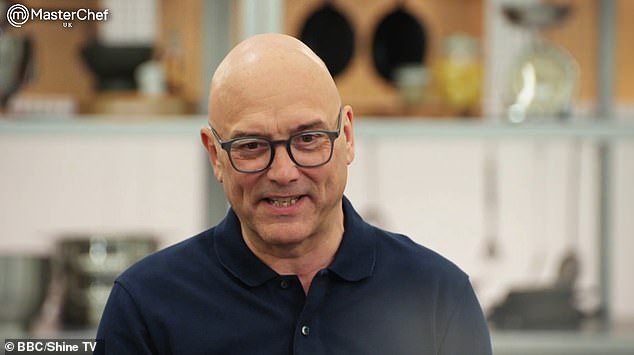 Gregg Wallace, pictured, observed with great interest as Marcus demonstrated how to make the pub classic 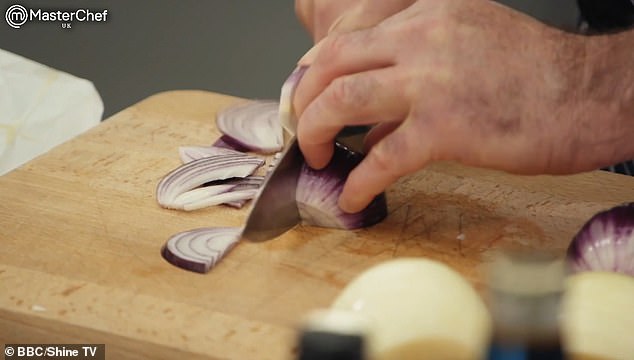 Marcus began by chopping red and white onions to make the gravy, saying he liked his onion gravy to have lots of onions, pictured 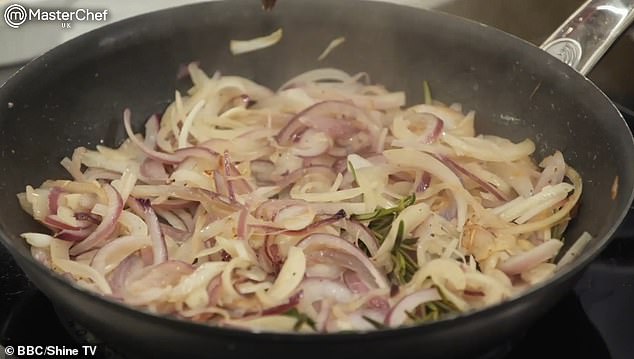 The caramelised the onions in a pan with herbs and seasoning, while he prepared the rest of the meal, pictured

‘I’m looking for our chefs to cut them nice and neatly,’ he said while dicing the onions.

Gregg asked the chef why he had picked bangers and mash for the show’s first skill set of the series.

‘There are lovely, little key skills in here Monica and I will be looking for,’ he said while pouring the chopped onions into the pan.

‘That’s quite a lot of onions, but when it’s an onion gravy, I want onions in my sauce,’ Marcus said with a smile.

Monica also had great expectations ahead of the show’s first skill test. 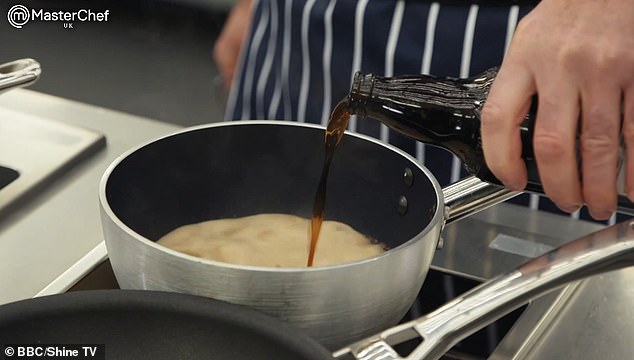 The chef used a bitter stout to make the gravy, which he left to reduce in a pan. He added honey later on to counteract the bitterness 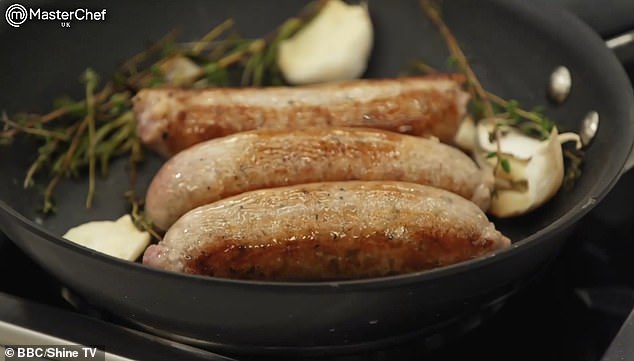 The professional chef showed a trick to cook the sausages perfectly, he puts a sheet of paper underneath them so they can cook evenly 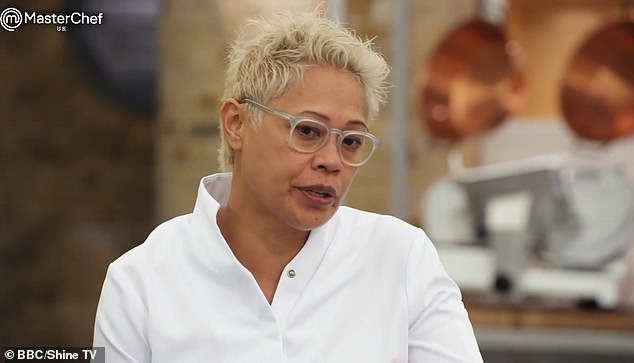 Monica, pictured, said she wanted people to take their time to make the best bangers and mash they’d ever done

‘I would hope they’ll walk in there and don’t think, you know, “Oh bangers and mash, done in 10 minutes”,’ she said.

‘Use the time carefully to cook them beautifully, to make a wonderful sauce to go with it, and the best mashed potato they’ve ever made,’ she added.

With the first part of the gravy done, it was time to get to the pièce de résistance.

‘So next, I’m going to get my sausages on. Sausages for me are all about just great colour. All the way over,’ Marcus said.

‘I don’t want one side coloured more than the other, I don’t see one side burnt. Small little points of detail,’ he added. 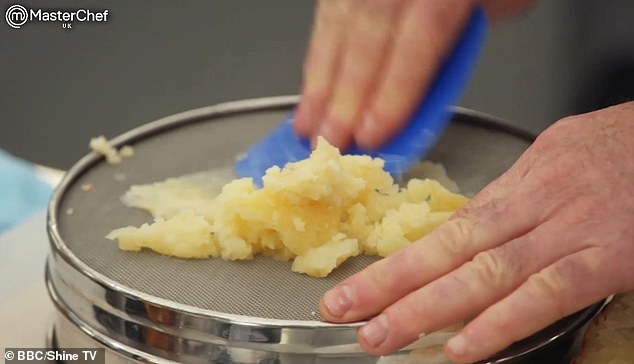 In order to avoid getting a claggy mash, Marcus said to push the mash through a sieve and not to scrap it, pictured

The chef revealed he had a trick up his sleeve to make sure the bangers don’t burn.

‘I’m just gonna sit them in a nice butter paper, and they’ll just nicely just gently tick over in there,’ he said, sliding a thin paper under the sausages.

He also kicked the gravy up a notch by flaming the onions.

‘Onions are caramelising, and now I’m gonna flame them with some brandy,’ he said.

‘Flambéd bangers and mash!’ Gregg said. ‘You know you’re on pro MasterChef when that happens.’ 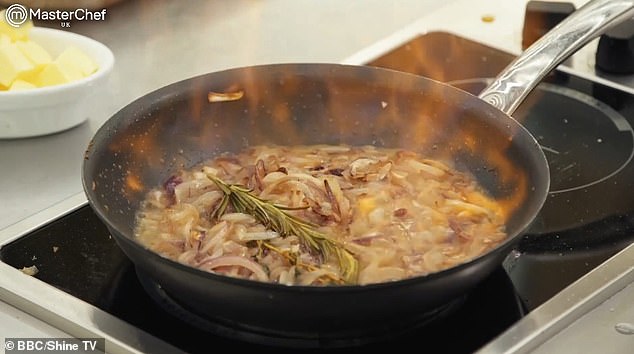 The chef then flamed the onions with brandy to kick the meal up a notch, pictured, before moving on to the mash

1. Reduce the stout into a sauce pan. Once reduced, add honey to make it less bitter.

2. Chop the onions thinly and neatly

3. Caramelise the onions in a pan. Add some balsamic vinegar.

3.  Pour brandy on the onion because carefully flaming them.

4. Cook the three sausages evenly in a pan, turning them to make sure no side is more cooked than another.

5. Push the baked potato through a sieve to make a puree, then add the milk and butter to make it richer.

Marcus poured the brandy on top of the gravy before setting it alight and tossing the pan.

‘I’m gonna put a little splash of balsamic vinegar. A little bit of stock,’ he said, pouring one after the other into the mix.

‘So the stout is nicely reducing so I’m now going to counteract the bitterness of it by just incorporating a little bit of honey,’ he said.

‘If our chefs don’t sweeten the reduced stout or the reduced ale, it’s gonna be very bitter, yeah?’ Gregg asked.

‘So just add the stout into there. Just a bit at a time, keep reducing that down,’ he said while delicately mixing the gravy.

‘Lots and lots of care and love going into that gravy,’ Gregg joked.

For the last portion of the meal, Marcus turned his attention to the mash.

‘I’ve got some milk in here just warming through. I’ve given them a baked potato,’ he said.

He said the potato needed to be pushed through a sieve rather than to scrap it through, to avoid the mash going ‘claggy.’

‘It sounds simple but we’ve had bad mash before especially under pressure,’ Monica said.

‘We’ve all had this, you must had this dish when you were a kid, right,’ Gregg asked Marcus.

‘My dad was a potato merchant as you know, so I think we probably had potatoes pretty much every day of our lives,’ Marcus said.

The chef showed how to complete the meal by pouring the potato puree into a pan, adding the milk and the better.

He began by pouring the gravy on the plate, stacked the three bangers on top of each other, and served a generous dollop of mash next to it.

MasterChef: The Professionals returns on BBC One tonight at 7:30pm 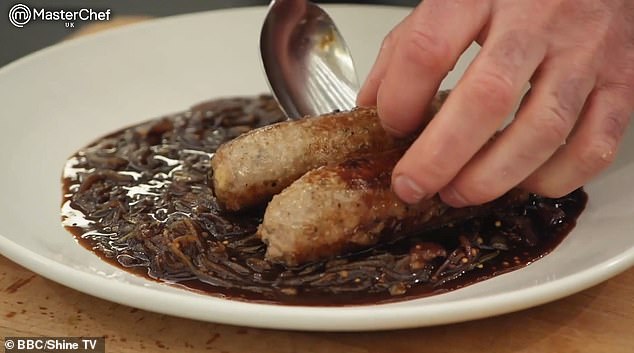 The chef began by serving the gravy then stacking the sausages on the plate with a spoon, pictured 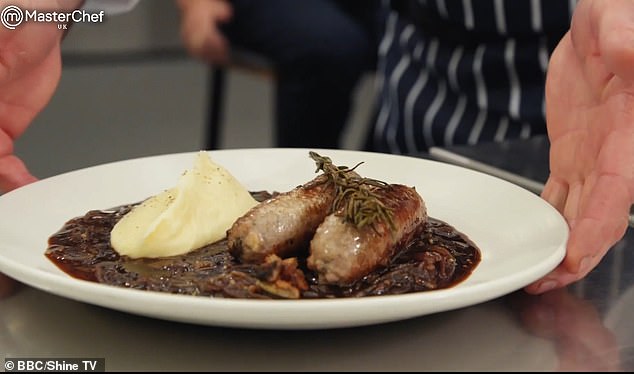 Marcus, who is the son of a Potato Merchant, served up the bangers with a generous dollop of mash, pictured