The McDonald’s Christmas advert, released by the fast-food chain on British screens ahead of the festive season, will tug at the heartstrings of any burger enthusiast.

It stars Matilda, a little girl with an active imagination, who brings to life her fluffy, imaginary friend, Iggy.

As she grows up, Matilda leaves Iggy behind, but a trip to her local McDonald’s sparks her Christmas memories, and Matilda and Iggy are reunited.

The advert is set to a rendition of Cindy Lauper’s ‘Time After Time’ by Mabel, who will be giving 10p from each download to the food charity FareShare.

As part of its Christmas campaign, McDonald’s will also donate funding to enable FareShare to redistribute five million meals to families most in need over the holidays.

McDonald’s UK has released its heartwarming Christmas advert for 2021, which follows a girl named Matilda, right, and her imaginary friend Iggy, left 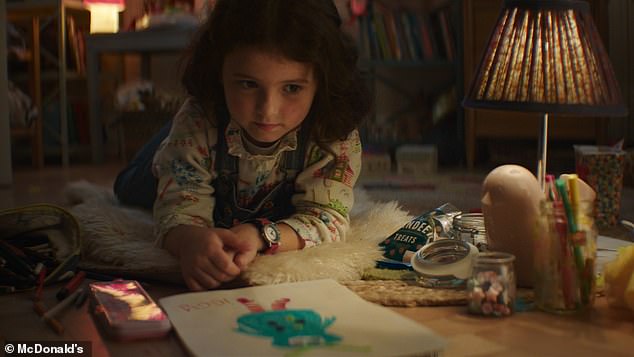 At the start of the advert, Matilda, who appears shy and withdrawn, draws Iggy and brings him to life

The advert begins by showing Matilda drawing on the floor at a young age over Christmas.

She draws a blue creature with green horns, black ears, red and white socks and calls it Iggy.

As she lifts her head, Matilda realises that Iggy has come to life, and feeds her McDonald’s carrot snacks, renamed ‘Reindeer Treats’ for the festive season.

The pair become best of friends as meanwhile Matilda’s parents’ decorate her home just in time for Christmas. 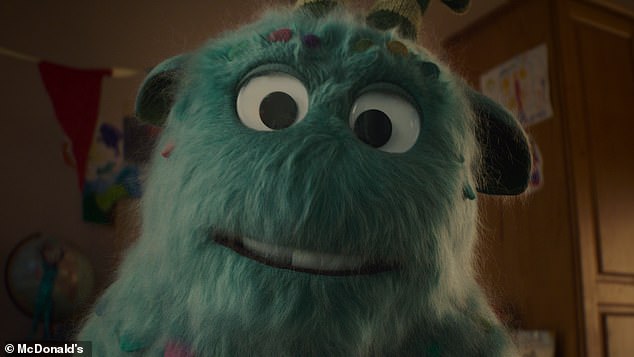 Iggy is a furry and lovable creature who wears a knitted hat over its horns. Matilda and him instantly become friends 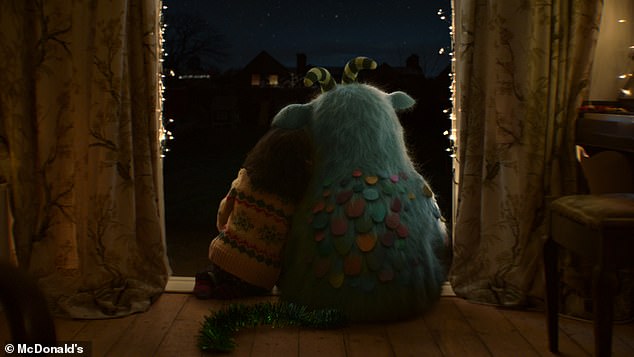 The little girl and her imaginary friend sit down together and cuddle to watch the starry night sky, pictured

Iggy gets Matilda out of her shell with games around the house during the festive period, pictured

A few Christmases later, an older Matilda, dressed as a reindeer, puts on a show for her family in the living-room, but is struck by stage fright.

Iggy, who is standing behind her family, cheers her on and does the choreography with her, giving Matilda courage, and is delighted when she finishes her performance.

As the advert goes on, Matilda turns into a teenager, and gets her first mobile phone. As the family sits together to watch a movie, with Iggy laying on the floor, she stands up and leave the room.

Then comes a day where Matilda has outgrown Iggy and leaves her furry friend behind in her wardrobe, in a move that symbolises her leaving childhood and falling out of love with Christmas.

When Matilda puts on a show for her family at Christmas ,Iggy is cheering her on behind her parents and relatives, pictured 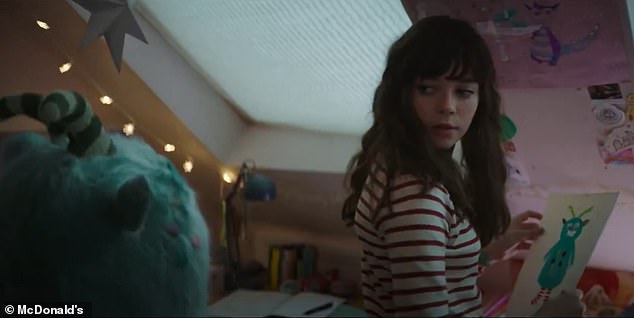 Matilda then becomes a teenager and outgrows Iggy. She leaves him behind in her wardrobe, pictured

In the next scene, Matilda, now an adult, visits her local McDonald’s branch with two friends.

As she enjoys her meal, a little boy catches her attention: it looks like the boy is feeding his imaginary friend the same way Matilda would Iggy when she was a child.

This sparks Matilda’s imagination, and she rushes home to free Iggy from her wardrobe. 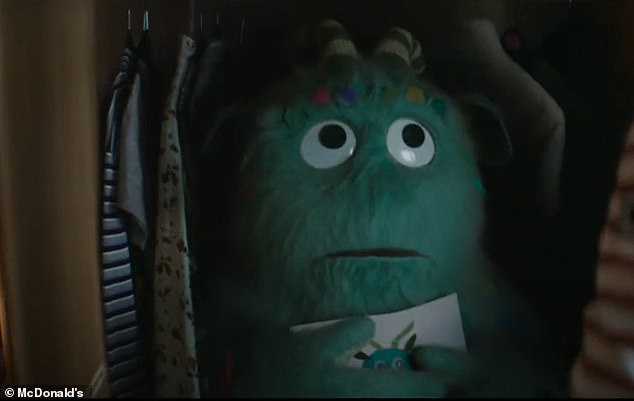 Heart-broken Iggy clutches the drawing Matilda completed when she was a child, understand she is now too old to play with him, pictured

At first, she fears that her friend has gone forever, but after a few moments, Iggy emerges from the closet with a tentative grin.

The pair hug and rush downstairs to watch the starry night sky like they did when Matilda was a child.

The advet, produced by Bert & Bertie, will premiere on Channel 4 during Gogglebox this Friday.

Years later as a young adult, Matilda goes out with some friends over the Christmas period

On the Christmas campaign, Michelle Graham-Clare, Senior Vice President, Chief Marketing Officer at McDonald’s said: ‘Christmas is such as joyous time for children and adults alike – with this year set to be better than ever as families reunite all over the country after a difficult few years.

‘We’re confident our advert perfectly encapsulates the magic of childhood imagination which comes alive at this time of year and provides a helpful reminder that you’re never too old to make believe,’ she added.

‘We are looking forward to seeing our customers’ reactions to the advert and hope that the friendship between Matilda and Iggy brings a smile to viewers when watching,’ she said.

While enjoying a meal with her friends at her local McDonald’s branch, Matilda spots a familiar scene

She sees a little boy feeding carrot sticks to his own imaginary friend like she did with Iggy, pictured

The advert comes as McDonald’s has revealed its festive menu.

The fast food chain has unveiled its limited edition festive menu, which will be rolled out across the UK from November 17.

The selection, available for six weeks, includes two new £4.89 burgers: a Festive Stack with beef and cheese sauce and a Festive Crispy Chicken with chicken breast fillet in a crispy coating and cranberry sauce.

Customer favourites like the Cheese Melt Dippers, £1.89, and the £1.49 Celebration McFlurry will also make a return.

After rushing home to free him from her closet, Matilda and Iggy are reunited and resume their Christmas traditions, pictured

Meanwhile, the Festive Crispy Chicken is made of breast fillet, cranberry sauce, a stuffing-inspired sage and onion mayo, bacon, red onion, lettuce, cheddar cheese and comes in a poppy and sesame seed bun.