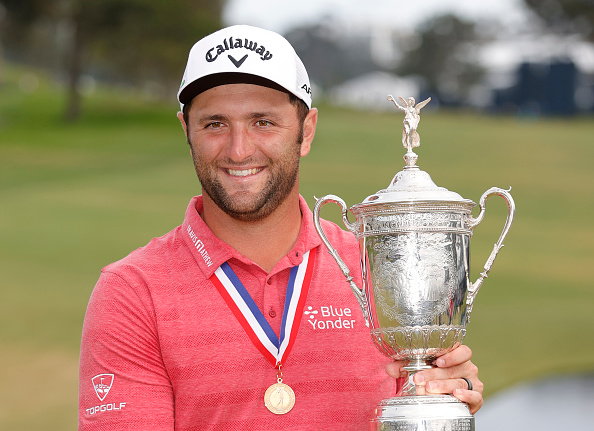 Rory McIlroy and Bryson DeChambeau were keen to take the positives from their US Open runs despite missing out on the title to Spaniard Jon Rahm.

Rahm, 26, claimed his first major after finishing with back-to-back birdies on the final day of the tournament at Torrey Pines.

South Africa’s Louis Oosthuizen was his nearest challenger – finishing on five under, one shot behind new US Open champion Rahm – while McIlroy and DeChambeau faded after early challenges.

McIlroy, who won the US Open ten years ago, started the final round two shots off the lead, but made a double bogey on the 12th to slip down the leaderboard, eventually finishing joint-seventh on one under.

‘It’s been a positive week, I gave myself a great chance today,’ the Northern Irishman said. ‘Even through 10 holes, I was right in the thick of things. It was really two holes that basically stopped the run at the title.

‘I played well. I felt comfortable with what I was doing out there. I felt like tee to green I was really solid for the first few holes, but once I made those little mistakes on 11 and 12, I felt like I was just chasing a little bit, and then ultimately I couldn’t really get anything done from there.

‘I’m a big believer in karma and after what happened a couple of weeks ago, I stayed really positive knowing that big things were coming,’ said Rahm.

‘I didn’t know what it was going to be but I knew we were coming to a special place. I got my breakthrough win here and it’s a very special place for my family.

‘The fact my parents were able to come, I got out of Covid protocol early, I just felt like the stars were aligning.’

Rahm, who has represented Europe at the Ryder Cup, dedicated his US Open triumph to fellow Spaniard Seve Ballesteros, who won five major titles but died ten years ago at the age of 54.

‘I knew my best golf was to come and I have a hard time explaining what just happened because I can’t believe I made the last two putts and I’m the first Spanish player to win the US Open,’ Rahm added.

‘This is definitely for Seve – I know he tried a lot, I know he wanted to win this one most of all.’

For more stories like this, check our sport page