The Duchess of Sussex put on a very glamorous display after being styled by an A-list glam squad as she posed alongside husband Prince Harry for the cover of Times 100 magazine.

Meghan Markle, 40, was styled by an elite group of stylists who work with the rich and famous, with world renowned fashionista Nina Hallworth, who was assisted by Jane Hallworth, dressing the royal in a white shirt and tailored trousers.

Meanwhile, Serge Normant, who created Meghan’s ‘messy bun’ on her wedding day to Prince Harry in May 2018, was responsible for the Duchess of Sussex’s wavy hair style, which hair stylist James Johnson told FEMAIL is the ‘main focal point of this piece.’

‘Her middle parted big waves highlights her authority and the leg apart stance gives viewers a glimpse of her powerful new status,’ he explained. ‘It gives me Beyoncé vibes showing us girl power – backed up by her man, her Prince leaning on her showcasing the female empowerment, she’s wearing the trousers with her big hair.’ 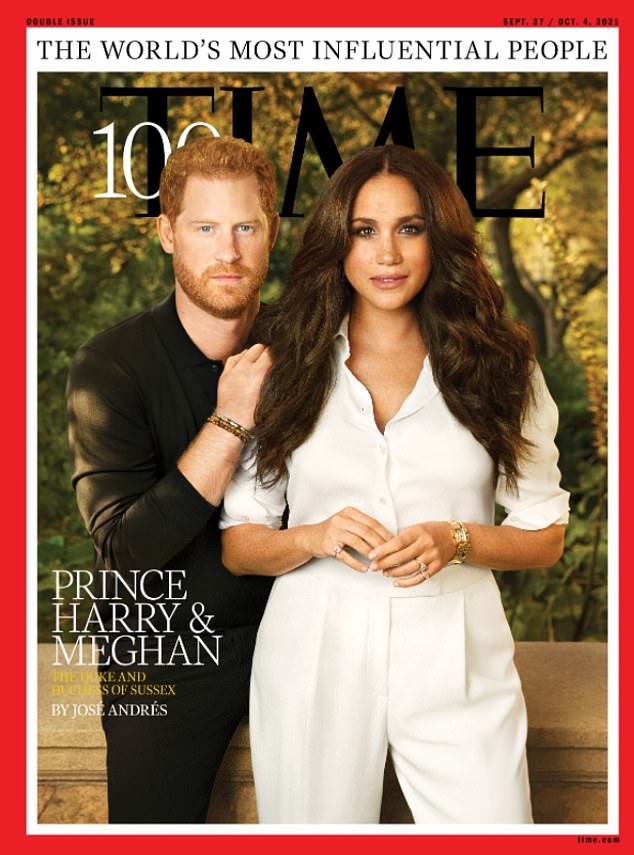 The Duchess of Sussex, 40, put on a very glamorous display after being styled by an A-list team of experts as she posed alongside husband Prince Harry for the cover of The Times magazine (pictured) 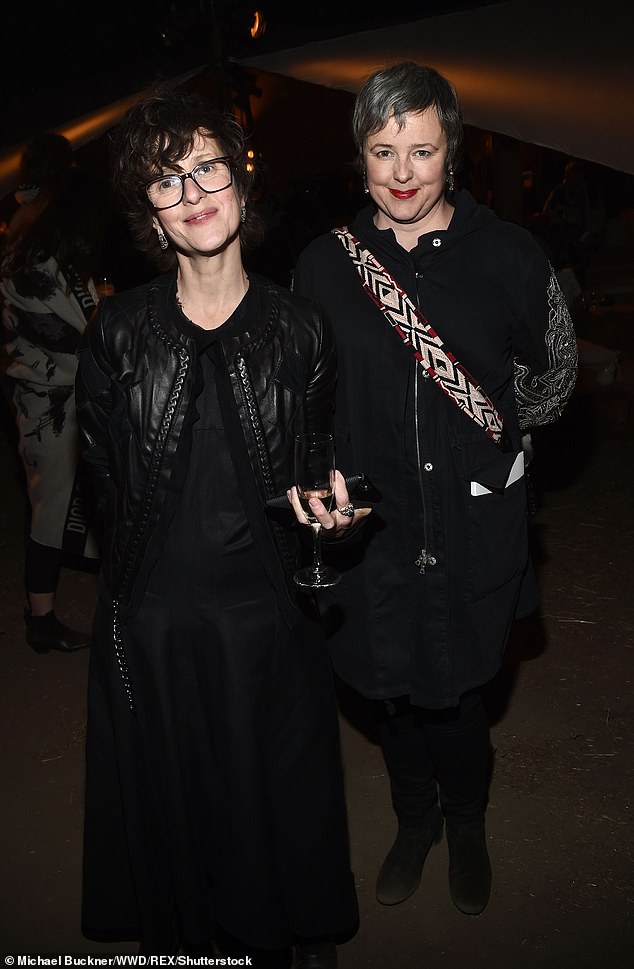 Working together: Nina Hallworth and Clare Hallworth pictured in May 2017 in Los Angeles

He added: ‘The hands softens her image as and shows her vulnerable side.’

Stylist Nina Hallworth and her sister Clare Hallworth have worked with a whole host of famous faces, most notably actress Jennifer Aniston.

Back in October 2019, the stylist sisters shared a picture of their client Jennifer Aniston apparently posing in her walk-in closet to Instagram, delighting fans.

The image showed the Friends star striking a pose in a black trench coat and strappy sandals. 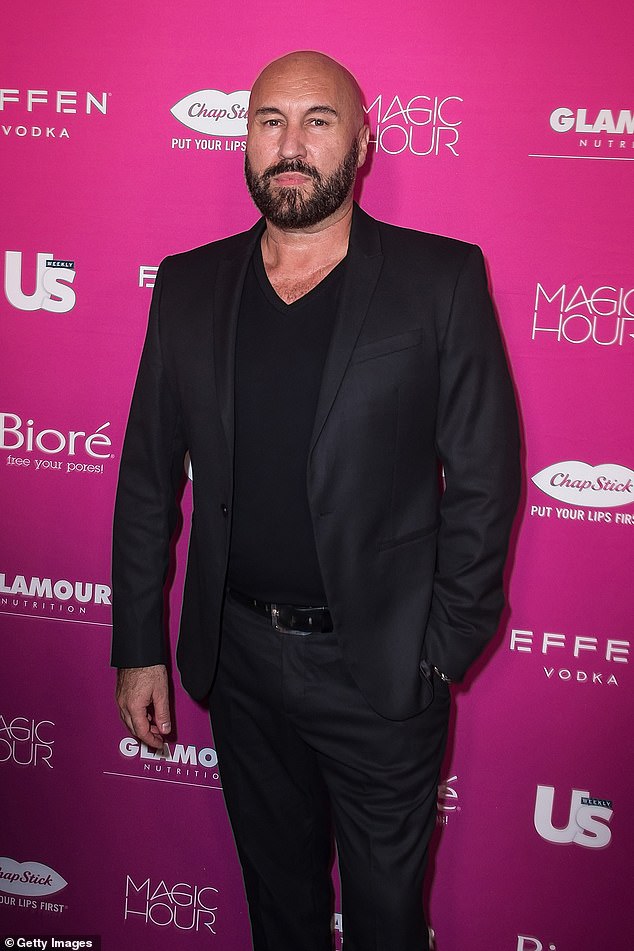 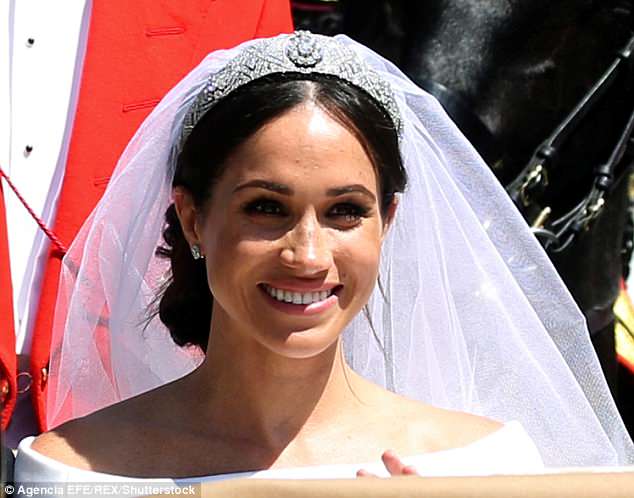 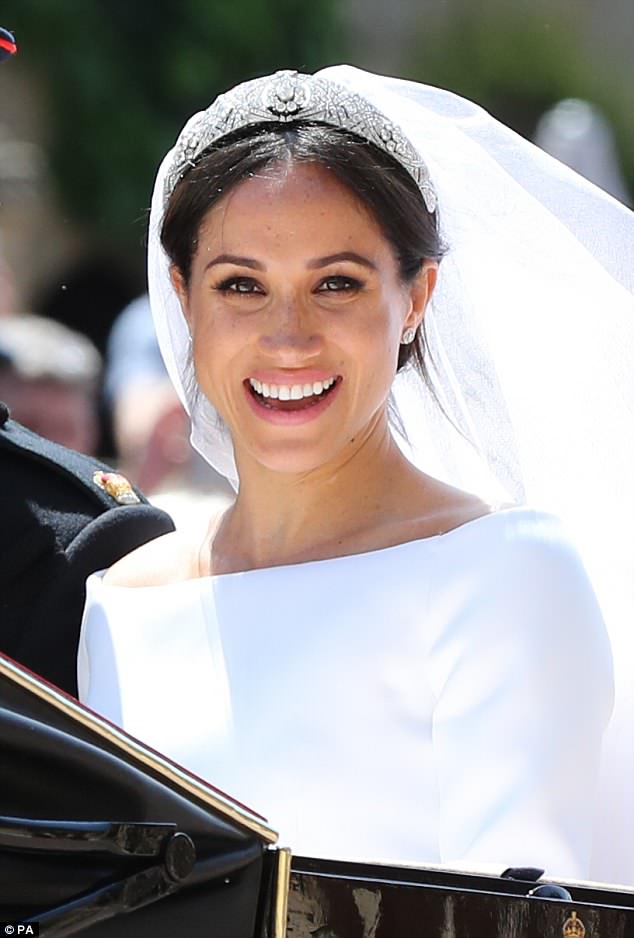 Meghan wore her brunette locks in an up-do, which her hairdresser Serge Normant described as a ‘messy bun’

Meanwhile, renowned hairdresser Serge Normant has previously been forced to speak out to defend Meghan’s wedding hair after her messy bun was criticised for coming ‘undone’ during the ceremony.

The Duchess of Sussex’s hairdresser, who is based in New York, revealed it took him just 45 minutes to style her hair – using grips you can pick up in the supermarket for only a few pounds.

‘I always tend to try and go as fast as I can at these events. Nobody wants to sit around.’

The hairdresser described the look as a ‘messy bun’, a style that Meghan has frequently sported in the past.

Describing how long it took him to style Meghan’s hair, tge French-born hair stylist, 52, explained: ‘You know not that long, believe it or not.

‘We had to blow dry it from wet, I would say 45 minutes to an hour. Then they did the make-up and then you fiddle around with it a little bit. But it’s not that long.

‘It’s a messy bun, we call it. Messy in a controlled way,’ he said. ‘Making sure it doesn’t become a whole mess after a few hours! I don’t overload the hair with products in general and certainly not on this day.’