Home » Lifestyle » Morrison on notice to lift his game

Morrison on notice to lift his game

Australians have downgraded Scott Morrison and his colleagues on two essential measures of his management of the coronavirus pandemic, sending him a message to lift his game.

This is a trend, not a blip. And it is about policy, not personality. 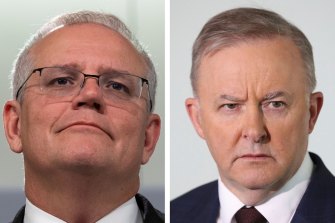 Prime Minister Scott Morrison and Opposition Leader Anthony Albanese. Labor is gaining ground on the most important question voters are likely to face at the next election: Which side can find a way out of this pandemic?Credit:Rhett Wyman/Alex Ellinghausen

When voters are asked to name the party and leader they believe are best to handle the COVID-19 challenge, 37 per cent name the Coalition and Morrison while 25 per cent name Labor and its leader, Anthony Albanese.

The government’s lead is strong. But it is slipping. The slide has been under way for several months, at the very time the problems in the vaccine rollout became clear to Australians waiting for their AstraZeneca or Pfizer shots.

That support surged in the days after the May budget, when Morrison and Treasurer Josh Frydenberg unveiled big packages for aged care and mental health. The gulf between the two parties widened to 46 per cent for the Coalition and 20 per cent for Labor.

But the Delta variant moves so fast that the budget seems like ancient history. And the spending does not mean much if it cannot buy more vaccines, sooner.

So Labor is gaining ground on the most important question voters are likely to face at the next election: Which side can find a way out of this pandemic?

The same shift is under way on a second measure in the latest Resolve Political Monitor, this one specific to health and aged care. When voters are asked which side is best to manage this policy area, 35 per cent name Labor and 30 per cent the Coalition.

This may not seem newsworthy because Labor usually leads on health. But it is a turnaround. The Coalition led on this issue only two months ago, by 34 to 29 per cent.

Voters are reassessing the two parties of government on other measures. There is a slight gain for Labor on economic management as well as borders and social restrictions.

But the survey tells us only about the past, not the future. It does not predict a trend, let alone an election outcome. The survey of 1607 people, all of them enrolled to vote, was conducted from July 13 to 17 and has a margin of error of 2.5 per cent. It suggests Labor is more competitive on policy but struggling to gain an edge on politics.

The frustration with Morrison brings a frustration with Albanese. If voters think the Prime Minister is not performing, they expect the Opposition Leader to do better. Or go harder. So the gap between the two leaders has barely changed: Morrison still leads as preferred prime minister, 45 to 24 per cent.

Old promises have caught up with Morrison and the Coalition after their claims earlier this year about opening the economy and vaccinating the community.

Now, with rising case numbers, extended lockdowns and a long wait for vaccines, the Prime Minister gets a reminder about what counts most for a leader in a pandemic. Not the promises. The delivery.