An extra $1 billion will be poured into saving the Great Barrier Reef from climate change and growing environmental threats as the federal government moves to protect tens of thousands of tourism jobs and bolster its green credentials in an election year.

Prime Minister Scott Morrison will announce the largest single investment into the world’s most extensive coral reef ecosystem in Cairns on Friday, investing in new programs and extending existing scientific work to protect the reef and its wildlife. 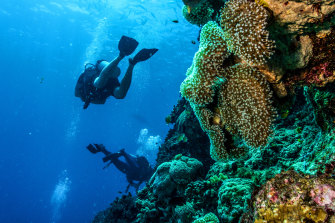 The Great Barrier Reef is one of Australia’s natural treasures but it is at risk from climate change.Credit:Jason South

The reef remains at high risk of further destruction with climate change driving an increase in ocean and atmospheric temperatures, raising the risk of mass bleaching events. The internationally significant tourist destination, which supports 64,000 jobs and contributes $6.4 billion annually to the economy, suffered severe back-to-back bleaching that wiped out swathes of corals in 2016, 2017 and 2020.

The new funding will support the deployment of new technology, water management practices reducing threats from Crown of Thorns Starfish, protect key species and prevent illegal fishing. It includes coral seeding, the development of heat-resistant coral and climate adaptation work with turtles and other marine species.

The funding, which is over the next nine years, also includes $579.9 million to improve water quality by working to remediate erosion, improve land condition and reduce nutrient and pesticide runoff.

Mr Morrison, campaigning for the re-election of veteran MP Warren Entsch in the Far North Queensland seat of Leichhardt, said the new package would extend the federal government’s investment under the Reef 2050 Plan to more than $3 billion.

“We are backing the health of the reef and the economic future of tourism operators, hospitality providers and Queensland communities that are at the heart of the reef economy,” he said.

“This is already the best managed reef in the world and today we take our commitment to a new level.”

The government agency that oversees the Great Barrier Reef has warned it is at risk of another summer of coral bleaching as the major parties prepare for an election campaign heavily centred on several north Queensland seats with local economies that rely on the tourism sector.

Improving water quality will require landscape-scale land management transformation across a catchment area of about 424,000 square kilometres. About 80 per cent of the Reef catchment is under agricultural production, which will put the focus on farmers and graziers to adopt better land management practices to reduce sediments, nutrients and chemicals entering rivers and flowing into the reef.

Earlier this month Labor announced it would commit $163 million towards boosting conservation efforts and jobs, including coral to coast reef resilience and land restoration projects in Reef catchments.

Scientists say both major parties’ climate commitments fail to act consistently with the global action required to reduce carbon emissions enough to save the reef. The government and Labor have committed to reach net zero by 2050 and to curb emissions at least 28 per cent and 43 per cent by 2030, respectively.

The Coalition’s funding promise includes an additional support of $252.9 million that will go to the Great Barrier Reef Marine Park Authority to reduce threats from Crown of Thorns Starfish, implement advanced health monitoring systems and to prevent illegal fishing. More than 13,000 hectares of coral reef is protected under the program covering 253 reefs. The latest investment will extend the program to protect 500 reefs.

More than 275,000 starfish have been culled since the program commenced in 2014.

The Great Barrier Reef Marine Park Authority is expecting another bleaching event this summer, with corals already under heat stress due to elevated sea surface temperatures since December.

Last year Australia garnered enough international support to defer for two years an attempt by the United Nations’ cultural organisation to downgrade the Great Barrier Reef’s World Heritage status because of damage caused by climate change. UNESCO had recommended that its World Heritage Committee add it to the in danger list, a move which the Australian government claimed China had influenced for political reasons.

Daily horoscope for May 28: Your star sign reading, astrology and zodiac forecast

Drew Barrymore's Beautiful Air Fryer Is On Sale for $30 Off Right Now!