Home » Lifestyle » ‘One of the greatest predictors of divorce’: How to argue better

‘One of the greatest predictors of divorce’: How to argue better

Emile Sherman has learned the hard way the price you pay for winning arguments.

“I spent my childhood arguing with my sister… I would take opposing views and dance around with a whole range of different viewpoints that I’m not even sure I ever really believed,” says the Oscar-winning producer behind films including The King’s Speech and Lion. 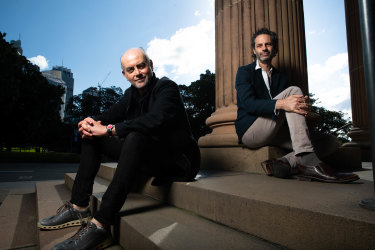 He enjoyed the thrill of “arguing the other side” and knew how to push her buttons. (He once argued that “elephants love being in zoos”.)

“It massively damaged [our relationship], damaged trust, and she felt that I didn’t take her seriously, that I wasn’t there [in conversation] in good faith,” says Sherman about his childhood relationship with his sister, Ondine Sherman, an animal rights activist. Now, he says, they have a good relationship and are “able to take the piss out of our own views”.

But the experience and an insatiable intellectual curiosity taught Sherman, 49, the importance of being “more generous” in the way he speaks with people with opposing views, and helped inspire a passion to explore what we lose when we aren’t, and what we could stand to gain if we all were. What would happen, he wondered, if we went in seeking to understand the strongest version of the other viewpoint, in search of the truth of a matter, instead of going in combatively to “win”? (This is an ethical methodology unknown, arguably, to most outside of philosophy and ethics buffs.)

It’s why Sherman, though his schedule is usually jam-packed with hammering out ideas with the likes of Nicole Kidman (who starred in Lion) and Jane Campion (with whom he collaborated on the TV series Top Of The Lake), has taken time to create a new podcast, Principle of Charity – along with his cousin Dr Lloyd Vogelman, a self-declared “recovering extremist”.

Each episode – there have been four – teams experts with opposing views to discuss various topics, from whether pornography is inherently demeaning to women, to if it’s moral to eat meat. The catch: each expert has to present the most generous version of the other person’s view point.

It’s already gained some high-profile fans. “It’s truly edifying and inspiring,” said musical comedian Tim Minchin on Twitter. Sherman and Vogelman think that if more of us were to speak like this, it could change the world in far-reaching ways. (More on this soon.)

But for clinical psychologist Tamara Cavenett, approaching conversations like this could also help save our relationships which, according to the latest research, are under greater strain than they have been in a long time, with research showing that pandemic-related stressors have been associated with lower relationship satisfaction, interrupted sex lives, higher conflict, rising rates of domestic violence, and greater levels of parental stress leading to harsher parenting styles.

“Absolutely, and unfortunately, it’s definitely true,” says Cavenett, president of the Australian Psychological Society, that people are arguing more than they used to and experiencing increased family conflict, as a result of the pandemic and the financial uncertainty and anxiety it has created. In addition to arguments over perennial issues like major life decisions, chores and money, some couples Cavenett sees are now also arguing about social distancing, masks, and “who’s doing the right thing and who’s not”.

It’s creating what many have noted is a particularly “shouty” time.

Certain types of arguing styles that she sees are particularly damaging. “Contempt is a good example – where you give someone that sort of disrespect, mocking or ridiculing type of body language,” says Cavenett. “That’s one of the greatest predictors of divorce.”

And “pushing for a win” in an argument – rather than presenting our views and allowing the other person to express theirs, and working to consider their view in a collaborative “us” mentality – often leads to resentment.

Lurking within many people who refuse, or find it difficult, to see another person’s perspective, is low self-esteem and an often affiliated low ability to admit that they’re wrong. (People with this disposition sometimes have a childhood history of not being listened to or encouraged to communicate their emotions.)

But being this way has intellectual drawbacks, too.

“The people who get things most right around forecasting in science and economics” – predicting what will happen in the stock market or a future election – “are the people who are less confident,” says Vogelman, a Sydney business consultancy owner and former anti-apartheid activist, referring to the work of University of Pennsylvania professor Philip Tetlock, who has studied “super forecasters” for 30 years. “Because they’re researching things a bit more, testing things a little bit more.”

But, how do we discuss opposing opinions generously, when someone is really getting on our nerves? Or they’re advocating for a position that we find scary?

Cavenett says we should aim to understand what life experiences have led them to a particular view or behaviour, to try and grasp their view, speak gently, without attacking – make requests instead of complaints and avoid sentences that begin with, “You always…” – and call time out, if we need to calm down. (And allow our partner to do that, too.) Equally important: spending time “repairing” the bond with the other person, and enjoying moments of positive connection with them outside of arguments.

“I mean I’m in a marriage, a fairly recent marriage which I would say, at the age of 60, is the first time I’ve been in a relationship with someone where we can disagree and we can talk it through,” says Catherine Lumby, professor of media at Sydney University, who participated in one of the podcast episodes.

Her inability to amicably talk through disagreements before, she says, was a contributing factor to the breakdown of her 18-year de facto relationship with the father of her two children.

“We might end up with better ideas about how to mange the COVID epidemic… how we think about who should be incarcerated, euthanasia.”

And being on Principle of Charity with long-time adversary and Charles Sturt University professor of ethics Clive Hamilton – to discuss if there is “good pornography or is it inherently demeaning to women” – has been similarly eye-opening.

“What surprised me is I think we largely agree,” she says. (She has frequently viewed ethical and respectful “erotica” as a valuable means of sexual expression. Hamilton has long viewed pornography as destructive and demeaning towards women.) “We both agreed that there’s really abhorrent pornography, the question [is] what you do about it… Now, if I was to bump into Clive, I’d be wanting to have a glass of wine with him afterwards.” (Hamilton says he felt less “uncompromising” to Lumby’s perspective than he used to, as a result of their conversation.)

It’s the kind of growth, says Sherman, that if experienced en masse, could change the world for the better by creating a society that has “better ideas” and “better principles”, resulting from people with opposing views realising that the best idea – the truth about a matter – might lie somewhere in the middle.

“We might end up with better ideas about how to mange the COVID epidemic… how we think about who should be incarcerated, euthanasia.”

For now though, he says his own life has been enriched by coming to understand his own “blind spots” and “privilege” as a white man, particularly by taking on film and television projects that don’t just “shine a light on social justices” but do so by “giving the microphone to marginalised voices, so they can tell whatever stories they want”.

“It’s been an awakening,” he says, adding that it’s led to his latest project, Firebite, a “vampire TV series” led by acclaimed Indigenous Australian director Warwick Thornton and featuring “as many Indigenous cast and team as possible”, about two Indigenous hunters on a quest to battle the last colony of vampires in the South Australian desert. “That’s really exciting storytelling… That would not have happened, and hasn’t happened previously, because there just hasn’t been as much of a focus on the value of the Indigenous perspective.”

Make the most of your health, relationships, fitness and nutrition with our Live Well newsletter. Get it in your inbox every Monday.

Most Viewed in Lifestyle