Controversial ‘Stern Queen’ painting by British artist Norman Hutchinson – which sparked a storm over its ‘dour’ depiction of Elizabeth II in 1988 – goes back on sale for £8,000

A commissioned portrait of the Queen which sparked huge controversy when it was first released in 1988 – for making her look ‘dour’ – is to go back on sale tomorrow.

In his painting, British artist Norman Hutchinson depicted the monarch in the solemn outfit she wore to meet the Pope in 1988. The artwork was savaged by critics when it was first unveiled because people thought the Queen looked too severe.

While it was commissioned by Mansion House in Doncaster, they eventually sent it back to Hutchison after he fell out with the council over it, and he kept it in storage for a decade. He maintained the painting of the Queen showed her strength.

Former dancer Caroline Brown, 72, who was a friend of Hutchinson, bought it off him in 2000, but is now selling it for £8,000, alongside 13 other works by the painter, including a nude portrait of her called Ageing Dancer. 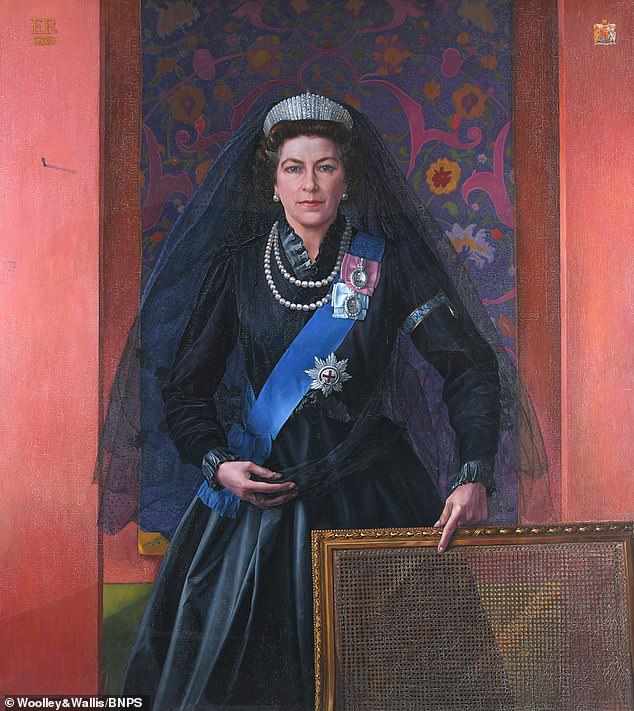 A portrait of the Queen, pictured, by British painter Norman Hutchinson, which was savaged when it was first released in 1988 – for making the Monarch look too ‘stern’ – goes on sale with a guide price of £8,000 tomorrow

The three-quarter length artwork was heavily criticised at the time, with many saying the artist had managed to make Elizabeth II look as dour as Queen Victoria. The story made the front page of several newspapers, including the Daily Mail, at the time.

Hutchinson, who also painted Prince Philip and the Queen Mother, reportedly fell out with the portrait’s commissioner, Mansion House in Doncaster, over the finished piece.

The artist kept hold of it and put it in storage for a decade before his close friend, the former dancer Caroline Brown, bought it off him for an undisclosed sum in 2000.

The painting hung in her townhouse in Bath for two decades but she is now selling it as she has recently downsized to a London apartment.

Ms Brown, 74, said Hutchinson was upset with the hostility shown towards the painting as he had sought to convey the Queen’s ‘strength’. 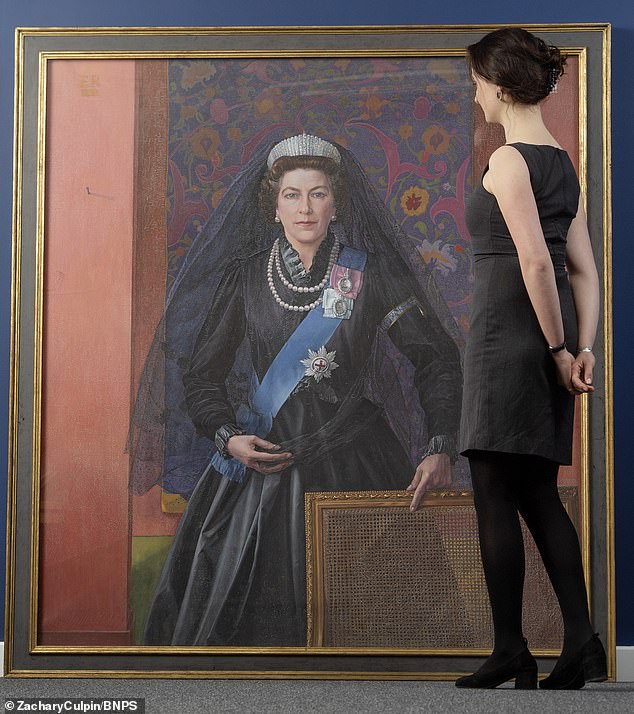 The portrait of the Queen was commissioned by Mansion House in Doncaster, but ended up in storage after the artist fell out with Doncaster council over the finished painting, pictured

The tempera on canvas 5.5ft by 5ft painting is tipped to fetch £8,000 with auctioneers Woolley & Wallis, of Salisbury in Wiltshire.

Ms Brown, who posed for Hutchinson for his painting Ageing Dancer, said: ‘It was said that Norman had made the Queen look severe but he said that during the sittings he was struck that she was a strong lady, and that’s what he wanted to get over.

‘Norman fell out with Mansion House, who had commissioned the portrait, and kept it in storage for 10 years.

She continued: ‘One day, I asked him about it and I offered to sell it for him through my contacts in Hong Kong (where she had lived with her then husband). 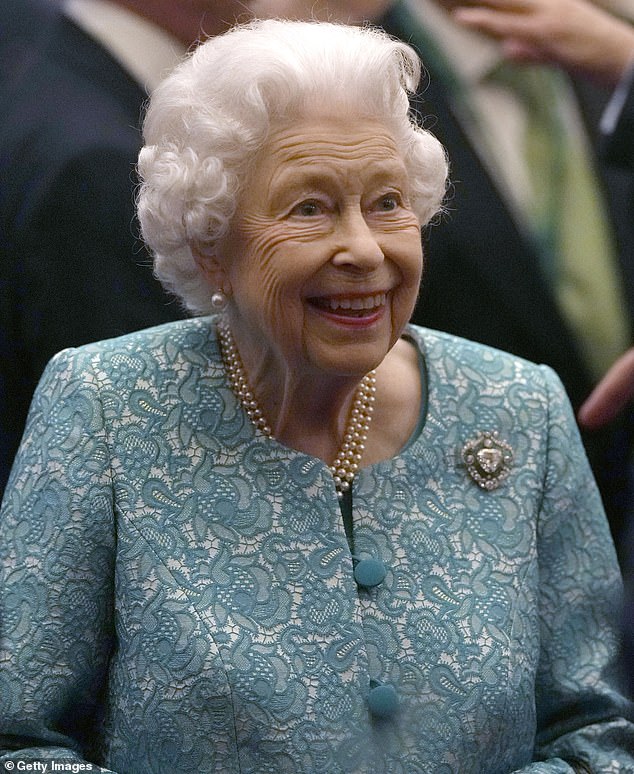 When the portrait was unveiled, it was said it made the Queen look as ‘dour’ as Queen Victoria. Pictured: The Monarch beaming at a reception in at Windsor Castle on October 2021

‘When I asked him how much he wanted for it and he told me, I said I would buy it myself and it has been on my staircase since.’

Hutchinson, the illegitimate son of Scottish nobleman Eric Douglas and his 15-year-old Anglo-Indian servant Florence, was born in Calcutta, India, in 1932. He died aged 78 in June 2010 in Marrakech.

Brown is now selling her collection of 13 Hutchinson paintings, including her own portrait, and the portrait of the Queen, with  Wooley and Wallis in Salisbury. 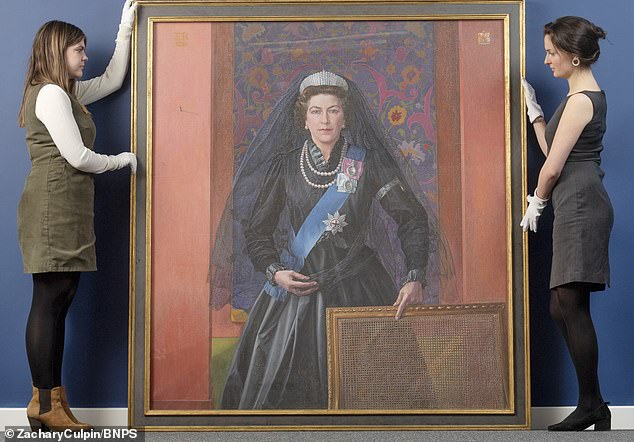 The portrait, pictured, will be sold with 12 other works by Hutchinson that used to belong to his friend Caroline Brown tomorrow via auctioneers Woolley & Wallis

Victor Fauvelle, head of paintings at Woolley & Wallis, said: ‘Ironically it may have been Hutchinson’s lowly upbringing which cemented his future with the Royals.

‘The patron of the orphanage where he was brought up was Lady Mountbatten, and she commissioned him to paint her when he was just 18.

‘It was her nephew by marriage, Prince Philip, who was the first to sit for his portrait with Hutchinson.

‘But, of course, it was the portrait of Queen Elizabeth herself that cemented the artist’s reputation.

‘The portrait was a bit contentious when it was first painted and was described by the press as “the stern Queen” and was likened to certain portraits of Queen Victoria.

‘It’s a painting with a real presence and shows a different side to our monarch than many of the other portraits of her.’