Home » Lifestyle » Panettone? It's got to be Gucci – or Prada, darling!

Panettone? It’s got to be Gucci — or Prada, darling!

Forget jewellery, couture clothes and handbags. This year’s must-have festive accessory is a panettone — a designer one, darling.

The sweet, fruit-filled Italian bread, a Christmas staple since 1495, has had a fashionable makeover thanks to collaborations between top design houses and luxury bakeries.

Designers including Gucci, Dolce & Gabbana and Prada are offering their own chic takes on panettone this Christmas, consisting of richly flavoured brioche-style bread with lavish decoration, presented in a collectable gift box or tin.

Made with the best ingredients — including saffron at £8,500 per kilo, 18-carat gold leaf and even edible jewels — this is festive food with a super-stylish twist. 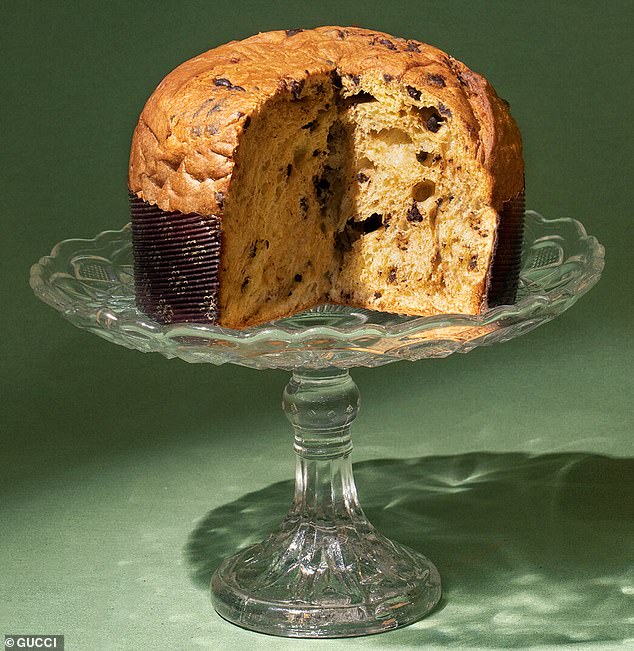 Panettone is a sweet, fruit-filled Italian bread and a Christmas staple since 1495. Designed to be the centrepiece of your table and enjoyed with fine champagne

Designed to be the centrepiece of your Christmas table and enjoyed with a glass of fine champagne (once everyone has appreciated the designer packaging, of course), it would make the ideal gift for the discerning fashionista in your life.

Nigel Wright of The Panettone Store, a British online retailer of luxury panettones, says: ‘It’s a way of showing you have taste and panache and that you hold the recipient in high regard.’

But do they taste as good as they undoubtedly look?

Italian designers Dolce & Gabbana have teamed up with Fiasconaro, a traditional baker from Sicily, to make a range of panettones. 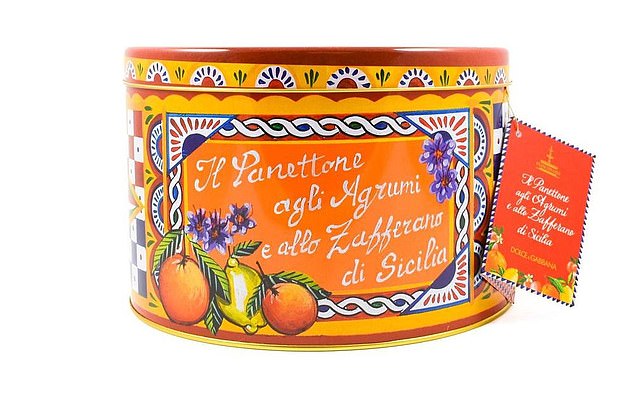 DESIGNER DETAIL: This comes in a gorgeous pink tin, painted by Sicilian artists. Inside, there is not only a hazelnut-topped panettone but a jar of ‘manna cream’ — a spread made from ash tree sap — and a gold knife to slather it on the bread.

TASTE TEST: The panettone is soft and buttery, falling apart in my hands in golden chunks. I’m less sure about the manna spread, which tastes like honey and makes it very sweet, but the bread itself is a triumph.

VERDICT: Really, this is the ultimate in fashionable food. 5/5

From Gucci’s very own restaurant, Osteria, headed by three Michelin-starred chef Massimo Bottura, this panettone (main picture) is one of three such festive products and the priciest around. There is also a mammoth 2kg version for £160.

DESIGNER DETAIL: Freshly brewed coffee is the secret ingredient in this uber-chic panettone. It’s baked with dark chocolate chips and proved several times for a light dough. The black and yellow tin is an ultra-modern classic and features Gucci’s ‘evil eye’ design.

TASTE TEST: Light-as-a-feather brioche bread with a pleasing zing of coffee — biting into this is like tucking in to a tiramisu. The chocolate chips are bitter, not sweet, so it feels grown-up.

VERDICT: Pricey but the flavours are worth it. 4/5

Served in a dazzling silver tin, this platinum panettone is designed to be the sparkling centrepiece of your Christmas spread. It comes from artisan Italian maker Bacco, which prides itself on spending 56 hours on each loaf.

DESIGNER DETAIL: If you’re not blinded by the blingy tin, the bread inside is even more of a feast for the eyes. Coated in white chocolate, it’s studded with platinum-hued edible jewels, which make it look like a tiara. 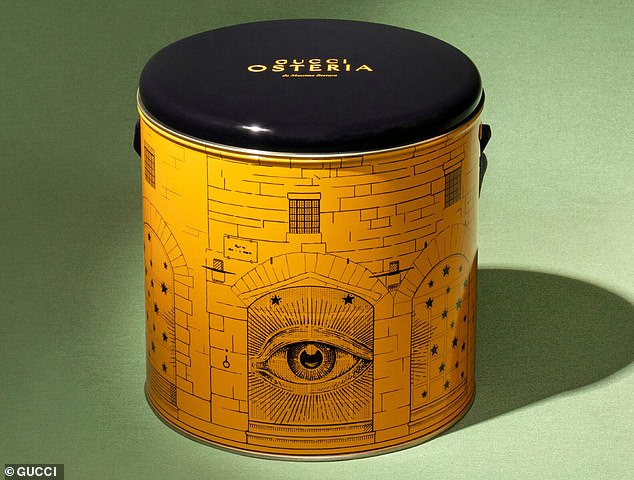 Gucci Osteria Special Panettone 2022, 1kg (£70, gucciosteria.com). From Gucci’s very own restaurant, Osteria, headed by three Michelin-starred chef Massimo Bottura, this panettone (main picture) is one of three such festive products and the priciest around

TASTE TEST: Slicing through the silvery crust is something of a disappointment: the bread inside is quite dry and dense. The crunchy pistachios and juicy sultanas add some texture, but I expected more.

VERDICT: Lovely to look at but the taste is a let-down. 2/5

PRADA’S IS SIMPLE BUT SATISFYING

This old-school panettone comes from Pasticceria Marchesi, the historic Milanese pastry shop part-owned by the Prada Group, which opened in London in 2019. Its festive range also includes a £700 3kg panettone decorated with edible gold horses.

DESIGNER DETAIL: Prada’s panettone is made from sourdough, which they say gives the loaf ‘a sophisticated elegance’. Disappointingly, it doesn’t come in a gift box — you’ll have to pay another £170 for that (or £445 for a silk-lined velvet one).

TASTE TEST: As a sourdough-lover, I’m excited to try this panettone. The crust is golden and the insides are pillowy clouds of buttery dough, packed with plenty of plump fruit.

VERDICT: Delicious, but a little on the simple side. 4/5

The royals’ favourite food hall has two designer panettones on offer this year, both by Sal De Riso, a high-end bakery on Italy’s Amalfi Coast. This, a limoncello creamtopped loaf, is the modest one; the other, a £200 ‘Panettone Oro’, is decorated with 18-carat edible gold leaf.

DESIGNER DETAIL: Fans of the lemony liqueur will adore this twist on the classic panettone. It’s decorated with lemon peel and comes in a regal blue box adorned with silver snowflakes. 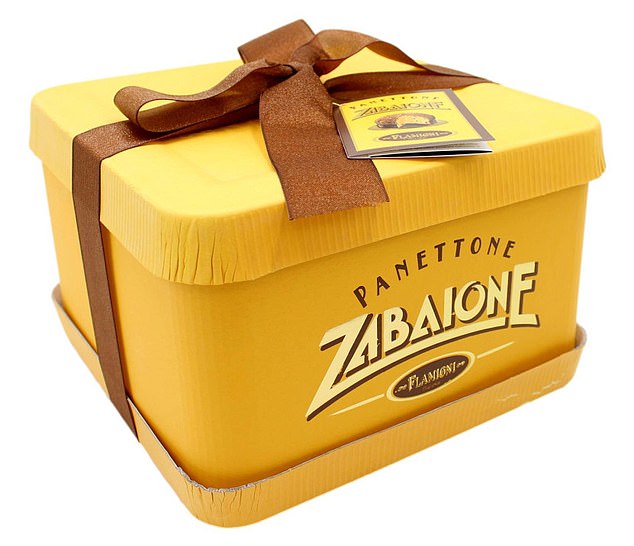 TASTE TEST: The citrussy twist on classic fruit is nice, but the bread itself is cake-like and so crumbly I might need more limoncello to wash it down.

VERDICT: More like a sponge cake than a panettone. 3/5

This best-selling citrus and saffron-flavoured panettone is for traditionalists who want a subtle twist. Domenico Dolce designed the limited-edition tin himself.

DESIGNER DETAIL: Dotted with pieces of candied orange, lemon and mandarin peel, and flavoured with exotic saffron, this is a slice of sun-drenched Sicily. The large, round tin would make a perfect hat box (if only I had a sufficiently stylish hat).

TASTE TEST: The panettone bread is light and airy but there’s so much peel in there, I feel as if I’m eating a jar of marmalade — topquality, of course — which is cloying in my mouth.

VERDICT: Definitely too fruity for my taste. 3/5

PANETTONE MADE TO CATCH THE EYE

DESIGNER DETAIL: Ready-wrapped in a bright yellow box tied with a bow, this is the perfect present for fashionable foodies.

TASTE TEST: The brioche oozes with sweet, thick cream called ‘zabaione’, which is made from egg yolks, sugar and wine. It’s finished with a chocolate glaze, making this a feast for the senses. If you like a bready texture, then this isn’t for you — it’s really more like an indulgent pudding.

From the food hall of the designer department store, this ‘Grande’ panettone follows a traditional recipe. It is the cheapest in this taste test and the makers say it’s best enjoyed ‘with an espresso, a glass of Vin Santo or toasted with ice cream’.

DESIGNER DETAIL: It comes in an Art Deco-style black, grey and gold cardboard box, topped with a looped ribbon so it can hang on the Christmas tree. Otherwise, it is unadorned.

TASTE TEST: A bit dry and uninspiring. Harvey Nichols normally excels in festive food and I had high hopes for this panettone, but it lacks the wow factor.

VERDICT: Doesn’t live up to its designer label. 1/5