Parent is slammed for feeding vegan friend’s daughter, 12, meat in secret because she looks ‘small and pale’ – but others argue the girl is old enough to refuse if it ‘impacts her values’

A mother has divided the internet after revealing that she feeds her vegan friend’s daughter meat in secret.

The anonymous woman, believed to be from the US, took to Reddit and explained how the 12-year-old friend – known only as ‘M’ – is ‘much smaller and paler’ than her own daughter.

She went on to explain how she thinks it’s ‘likely tied’ to her family’s ‘strict vegan diet’ and so feeds her meat whenever she sleeps over, which she claims ‘M’ tends to ‘wolf down.’

However, it wasn’t long before she was slammed by forum users for encouraging the girl to sneak about behind her parents’ back.

‘You are not her doctor. This isn’t your choice to make. Undermining her parents’ dietary choices is going to do more harm than good for her,’ wrote one, while a second penned: ‘Not your place to decide how someone else raises their kid. If you think there’s an issue, talk to them.’ 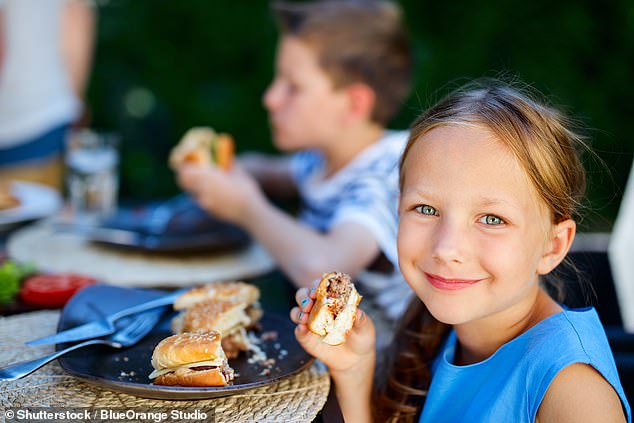 An anonymous parents, believed to be from the US, has divided the internet after taking to Reddit and revealing that she feeds her vegan friend’s daughter meat in secret

In the initial post, the woman in question penned: ‘Whenever she is over I always make a big meaty meal for them. Last weekend I made some cheeseburgers and steak for them on the grill with a big glass of milk.’

‘M absolutely loves it and always politely asks for more (which I happily provide). For snacks I give them some of my venison jerky. For breakfast I typically make a big plate of scrambled eggs and bacon again with a big glass of milk.’

‘Despite her size M always wolfs down whatever I make. And I have to say every time she leaves it looks like she has a healthy glow to her.’

The woman went on to say that although she knows she ‘probably shouldn’t be doing this,’ she thinks ‘M’ is a ‘bit malnourished’ and would get in trouble if she told her parents knew she’d eaten meat. 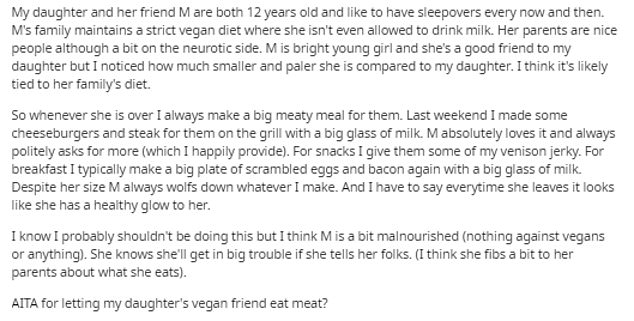 In the initial post, the woman explained how the 12-year-old friend – known only as ‘M’ – is ‘much smaller and paler’ than her own daughter, which she believes is down to ‘M’s’ family’s strict vegan diet (pictured)

However, the shocking revelation infuriated other forum users who reiterated how it was not her choice to decide what somebody else’s daughter eats.

‘I think “M is a bit malnourished” is where I deemed you the a**hole,’ wrote one. ‘You are absolutely judging her family, and her family’s diet, and you are doing this out of some misguided form of activism. You think you’re the hero here saving her from some injustice.

‘It’d be one thing if you were maybe just trying to make the kid happy one time and keeping a little secret — but you’re doing this to make a statement. You’re actively and defiantly disrespecting her parents.’

A second commented: ‘She can get super sick from this just because her body is not used to it. OP is disgusting and if I found out my daughter’s friends parents were doing this she would never go over there again.’

A third noted: ‘Not just that, no adult should be asking a kid to keep a secret from their parents, that is a very slippery slope and extremely inappropriate.’

Elsewhere, a fourth pointed out: ‘Also you’re not gonna make enough of a difference to where you can see a healthy glow that wasn’t there before after a sleepover. If there’s actually a glow, it’s probably just cause she’s happy after having an amazing time with her friend!’

However, others suggested that the 12-year-old girl is old enough to make her own decisions on what she would like to eat.

‘Without giving a judgement, I would suggest that at 12 years old she is old enough to decide her own diet and whether she wants to be a vegan or not. If she wants to eat meat, I don’t see an issue with it. If it’s being forced on her, huge issue,’ wrote one.

‘The thing is, she’s not vegan. Her parents are. I’m not saying he’s 100% in the right, but this comparison doesn’t check out.’

A second agreed and added: ‘If she didn’t want to eat it, or it impacted her values then she wouldn’t. Kids are deciding if they want to be vegan/veggie at this age, younger even. No one bats a eye except when the adult isn’t on board.

Although I would mention it to M and try and get her POV. Is she eating not to appear rude or does she genuinely want to eat meat? Do her parents know?

Just because she has been raised vegan, her family is, doesn’t mean she wants to be.’

Another commented: ‘I’m torn on this. At 12, this kid is old enough to eat whatever food they want, so if she wants burgers and milk, great. But, 12 is also young enough that doing this without her parents knowledge is pretty cr***y.’

‘I’d be livid if a parent willfully and intentionally flouted my dietary rules for my kid without telling me. If you have actual concerns about this child’s health, tell her parents.’