Parents argues they 'can't trust' school to feed their children

Angry parents have blased a school for serving their children ‘completely raw’ chicken burgers, claiming that their children have been left ill and in pain from food poisoning.

A student’s photo of their lunch served on Wednesday 8 December at Bulwell Academy in Nottinghamshire, has sparked backlash on social media from parents claiming their children became unwell after eating the same food.

Lindsey McFarlane took to Facebook to share the photo her niece took of the school dinner, while revealing her own daughter had eaten the entire undercooked meal and has been ill as a result.

The criticism of the school’s health and safety follows the recent complaints from students who claimed they’ve been told to eat their lunch outside in the cold. 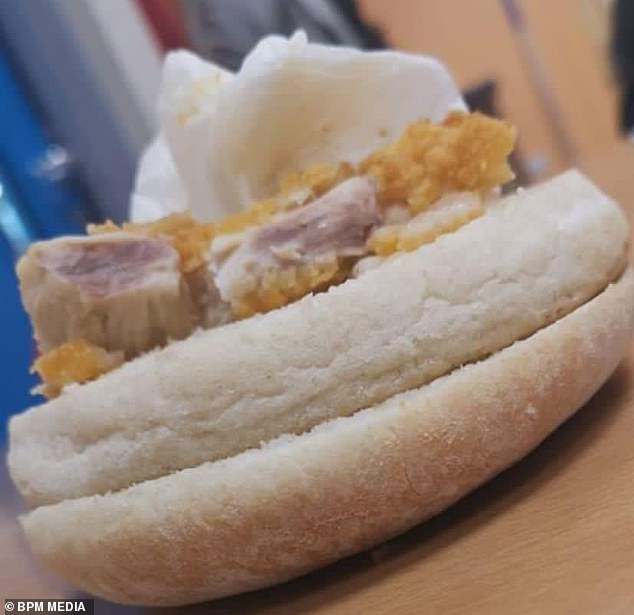 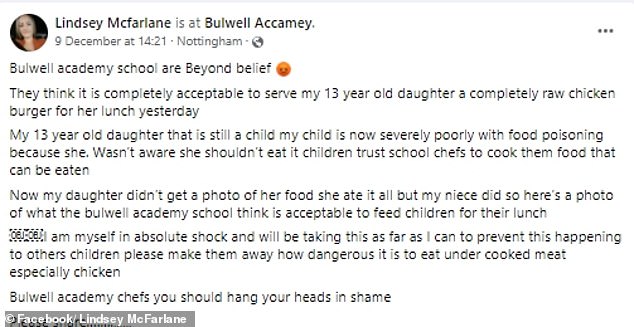 In a follow-up post, Lindsey said the school have removed the burger from their menu and blamed their supplier for the quality of the food

‘Children trust the school to give them the food they can eat, I never even thought to tell her to check if the food is cooked. It’s really dangerous.’

The mother claims her daughter was off school for a couple of days ‘doubled over in pain’.

Lindsey continued: ‘She woke up at 3am really poorly – it was awful. She’s eating minimal foods – whatever she can keep down.

‘They should check their meat, I do hope it was just a mishap. The headteacher did call to apologise. But I was absolutely fuming, it’s quite vital they check.’

She revealed the school removed the burgers from the menu and blamed their supplier for the quality of the food.

Relating to the situation, one parent commented: ‘Leighton was doubled over in pain last week and constantly going toilet. When I asked what he’d eaten he said a chicken burger at school, but I just put it down to a bug like you do’

Another said: ‘Oh my god bless her! Hope she is ok and starts feeling better very soon! How the hell have they managed to even let these be served, even my 11-year-old can cook better than that.’

A third added: ‘Hope she’s feeling better soon Lindsey. Poor thing sounds awful. Shylah’s been sent home today feeling sick and so has her friend just asked what they ate yesterday and they had the chicken burger too.’

A fellow parent, Christine Rae, 52, previously told how she’d been asked to pay £30 for a letter from her doctor so her daughter can have a pass to go to the loo in lesson time when on her period.

On food, she added: ‘My daughter comes here for lunch as she said the dinners are absolutely disgusting.

‘I can’t believe they’re serving that. I feel like taking my daughter out of school because of everything. I think it is so bad.’

A spokesperson for Bulwell Academy said: ‘Because we take food safety in our kitchen very seriously, incidents are few and far between. If they do happen, appropriate action is taken – as it was in this case – to ensure the usual high standard of safety is not compromised. ‘