Powers for Treasurer to intervene in super fund investments scrapped

The federal government has scrapped controversial plans to let the Treasurer intervene in superannuation funds’ investment decisions to ensure the support of crossbench and Nationals MPs for its proposed changes to the $3.2 trillion sector.

The last-minute amendments to the Your Future, Your Super legislation were introduced after Nationals MP Barnaby Joyce slammed the bill on Wednesday over concerns the powers could be used by a future government to block super funds from investing in coal, live exports or gas on “moral” grounds. He said several other Nationals MPs held similar concerns. 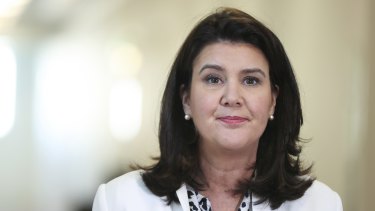 Superannuation Minister Jane Hume said she was committed to seeing the reforms in place from July 1, which would mean having them pass through the Senate in the final sitting fortnight.Credit:Alex Ellinghausen

The Coalition has 75 seats in the 151-seat strong House of Representatives. It needs the support of the Nationals and at least one crossbencher, but MPs including Bob Katter and former Liberal Craig Kelly were opposed to the legislation in part due to the planned powers.

An amendment was introduced on Thursday by the government to ditch the proposal in a bid to get the rest of the package through the House. It includes changes such as stapling workers to their funds to limit the creation of multiple accounts charging unnecessary fees and subjecting funds to benchmark tests that penalise underperformers.

In last year’s federal budget the suite of measures was estimated to save workers $17.9 billion over the next decade. The legislation is expected to go to a vote on Thursday afternoon.

Superannuation Minister Jane Hume said she was committed to seeing the changes in place from July 1, which means they would need to pass through the Senate in the final sitting fortnight.

“Most importantly [the amendment] doesn’t change the $17.9 billion in savings and doesn’t undermine the policy intent,” Senator Hume said. “The opposition have never assisted the government to enact a piece of super legislation that reforms the system, makes it more transparent and accountable. The crossbench are open-minded to the policy intent.”

The measures were heavily criticised by Labor superannuation spokesman Stephen Jones, who wrote to Coalition MPs twice to encourage them to fight the legislation from within on the grounds it would unite “miners and Greenies” over concerns future Treasurers could block spending and investment decisions of the funds.

Mr Joyce said he welcomed the change, which, if unamended, “would have given undue influence to a third person, a long way from the individual who actually earned the money, motivated by politics rather than actual returns”. He said the reforms would have become a “political football”.

Australian Bureau of Statistics data released on Thursday shows superannuation fund balances increased a collective 3.1 per cent over the March quarter to $3.19 trillion. The $97.3 billion increase was largely due to increases in overseas assets, unit trusts and shares. In March 2020, there was a 7 per cent drop in superannuation fund assets, largely due to sharp falls in values as the pandemic hit.