Push to get more than 60,000 aged care workers vaccinated as deadline looms

More than 60,000 residential aged care workers remain unvaccinated with less than three weeks before the jab becomes a requirement in facilities across the country, sparking fears nursing homes could be left without enough staff to care for residents.

But workers on student visas can work additional hours in the sector after the federal government extended the easing of work-hour restrictions to reduce pressure on aged care staffing. 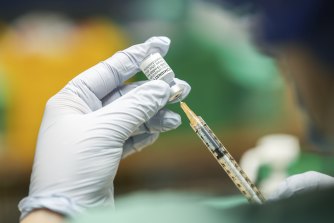 About 60,000 aged care workers are yet to be vaccinated. The deadline for first doses is September 17.Credit:Alex Ellinghausen

The federal government in June set a deadline for all aged care workers to have at least one dose of a COVID-19 vaccine by September 17.

To date, 78 per cent of the 273,214 residential aged care workers, including nurses, personal care workers, administration staff, cooks and cleaners, have had their initial jab.

Federal Aged Care Services Minister Richard Colbeck said the Department of Health was working with all facilities to ensure every worker had access to a vaccine before September 17, including through priority channels at GPs and in state and territory clinics.

Rapid antigen tests were also being used in facilities around Greater Sydney to protect residents, workers and their families, he said.

“Further use of rapid antigen testing will be considered, however, it does not replace the requirement for mandatory vaccination of workers,” Senator Colbeck said.

Health Minister Greg Hunt acknowledged that while there had been fewer hospitalisations and deaths overall during the most recent COVID-19 outbreak, the pandemic continued to put pressure on the aged care workforce.

“The government is ensuring student visa holders working in aged care can take on additional hours and this provides an important extra workforce,” he said.

The aged care worker vaccination rate varies across the country. On NSW’s north coast, just 40 to 49 per cent of staff have had at least one vaccination across the region’s 12 facilities. In Queensland, the Nerang region west of the Gold Coast has the same low rate.

The lowest regional vaccination rate in Victoria is 60 to 69 per cent of workers in the Cardinia, Baw Baw and Latrobe Valley regions east of Melbourne.

Even some of the higher averages hide lower rates at individual facilities, with some around the country reporting fewer than 20 per cent of staff have been partly vaccinated.

Opposition health and aged care spokesman Mark Butler said the federal government must do everything it could to supply vaccines to those workers.

“Tens of thousands of hard-working aged care workers still haven’t been provided with a COVID vaccine. [Prime Minister] Scott Morrison must outline what it means for aged care workers who are unable to get vaccinated by the 17th of September,” he said.

Health Services Union national president Gerard Hayes said the aged care royal commission found in March the sector was facing a staffing crisis that risked being exacerbated by the pandemic.

He predicted states and territories would have to give exemptions to facilities or regions where vaccination rates were low, which is permitted under some public health orders.

“I think they’re going to have to blink,” Mr Hayes said.

Nurses union boss Annie Butler said she was concerned about how states and territories would handle exemption requests, especially for facilities in regional areas that would have a harder time finding back-up staff.

LASA’s general manager for policy and advocacy, Tim Hicks, said the program would help identify barriers to vaccination take-up and assist with getting them to staff as quickly as possible.

“The pace of the vaccination of aged care staff has picked up markedly over the past three weeks, with more in-reach clinics allowing staff to be vaccinated at work or to be given priority at community vaccination hubs and GP clinics,” he said.

Victoria is the only state or territory that has not yet issued a public health order mandating vaccines, but Chief Health Officer Brett Sutton said he expected it to be in place by the due date.

Pressed on potential workforce shortages, Professor Sutton told reporters in Melbourne that Victoria had raised it at separate meetings of the country’s top health officials and health ministers.

“We have flagged that as a concern the Commonwealth needs to manage [in] that workforce that they’ve got responsibility for in private sector aged care,” he said.