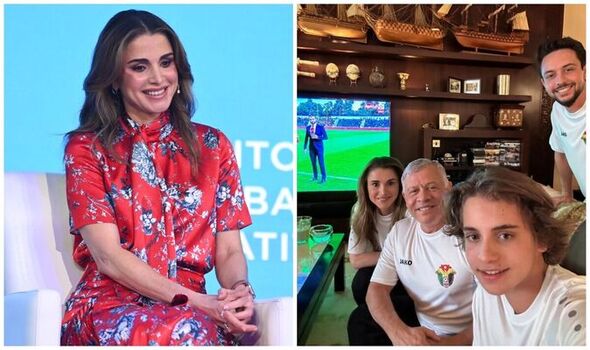 Queen Rania of Jordan, 52, took to social media on Thursday to post a picture with her husband King Abdullah, 60, and her two sons, Hussein, Crown Prince of Jordan, 28, and Prince Hashem bin Abdullah, 17. In the background, the Royal Family’s TV could be seen showing a football match in preparation for the FIFA World Cup in Qatar.

The picture was a selfie taken by Queen Rania’s younger son, Prince Hashem, which the Queen then posted on her Instagram story to her 7.2 million followers.

Judi James, a professional body language expert, spoke exclusively to Express.co.uk to analyse this rare glimpse into Queen Rania’s private life at home and relaxing with her family.

She said: “This very normal, natural and casual-looking photo of Queen Rania and her family at home watching the football seems to promote the idea of the levelling effect of what’s called the Beautiful Game, i.e. that everyone is just a fan when it comes to watching sport.”

According to the expert, this pose was “revealing” for a key reason.

Judi explained: “This is a very revealingly non-royal-looking pose with the family in T-shirts.

“The normally very elegant and regal-looking Rania is sitting crouched behind them to join in the selfie like the rest of her family.

“It gives a glimpse of a more accessible and fun side of the royals, plus their bonding as a family as they watch football with their sons.”

Judi argues that the Jordanian Queen Consort has been “linked” to football for a long time, so this was not a PR move on her part.

The expert opined: “Rania has been linked with the game for many years, showing this isn’t just a desire to promote a PR view of the royals.

“Her ‘1 GOAL’ campaign linked her with the football world on a global stage, using the links to campaign for education for everyone.

“Rania is also an avid campaigner for young people and children and this relatable pose could also help create a sense of bonding and empathy thanks to the equalising effect of the game.”

Queen Rania of Jordan is a champion of women’s rights for football, having met with female football players in the Under 17 Women’s National Football Team back in 2016, while they were training at the Amman Stadium.

The young players were getting ready to participate in the FIFA U17 Women’s World Cup championship, which took place in Amman in September and October 2016.

On August 20, 2009, Queen Rania co-founded and led the launch of the “1GOAL: Education for All” campaign alongside Gary Lineker, and with the help of top international footballers at Wembley Stadium.

On October 6, 2009, Queen Rania was joined by then-Prime Minister Gordon Brown, the President of FIFA, Sepp Blatter, President Jacob Zuma of South Africa, and other heads of state for the Global Launch of 1GOAL.

This was a very successful initiative for Queen Rania as it took place across six locations worldwide.

The Jordanian Queen spoke about how football can affect social change back in 2009.

She said: “Football’s the world’s most popular sport and we want to make the most of the pull it has to make Education for All a reality.

“That way football’s power will be put to use as a tool for making the world a better place.”