Home » Lifestyle » Queer as Folklore: Why are fans arguing over Taylor Swift’s sexuality?

Queer as Folklore: Why are fans arguing over Taylor Swift’s sexuality?

Taylor Swift has become almost as well known for carefully planting coded messages to her fans as she is for her crystalline voice and songwriting. The country-turned-pop singer’s commitment to revelation and surprise announcements has earned her a fan base that is both loyal to a fault and eager to solve the evolving mystery that is Taylor Swift.

And a particular subset of the Swiftie community, the “Gaylors”, believe they have uncovered her greatest mystery yet: her queerness. 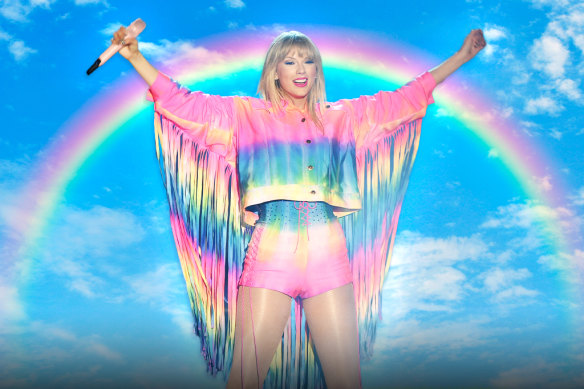 The question all ‘Gaylors’ want to answer: is Taylor Swift queer? Credit:Invision/supplied

“Her love songs are fraught with falling for one’s best friend, secret love, love that must be hidden and love that ‘breaks the status quo’,” says pop culture podcaster Cam Gray. “We all recognise this as a queer person subtly sharing their experience existing gayly [sic] in a homophobic world.”

Gray, a “mild Gaylor”, has explored this theory on her podcast What I Will Say, examining moments she believes signal Swift’s bi, fluid, or pansexuality including her “queer-coded” lyrics and her bi pride wig in the music video for You Need to Calm Down.

“No celeb of Taylor’s status has ever come out at the height of their career,” says Gray. “We need gay heroes and Taylor Swift is a lot of people’s hero.”

Since Gaylor whispers first emerged on lesbian forums in 2008 they’ve been criticised by the opposing “Hetlor” camp (who adamantly argue Swift is heterosexual) and those that think her sexuality, whatever it may be, is nothing to interrogate publicly.

But Dr Hannah McCann, a scholar in critical femininity and queer fandom, says these online communities are harmless.

“These fandoms do not exist to – or aim to – ‘out’ these celebrities,” she insists. “These fandoms are often a way for people to find queer representation in contexts that are otherwise saturated with straightness. From country singers to boy bands, these cultural spaces are assumed by the wider public to be entirely straight. Queer fandoms emerge within these contexts partly because people are trying to push against the grain.”

From the “Larry Stylinson” theory to David Bowie’s assumed bisexuality, speculation around celebrities’ sexual orientation is nothing new.

“It’s human nature to talk shit about our social superiors,” Gray says. “We’ve always done it, and we always will, and it’s homophobic to exclude queer people and queer stories from this natural human experience.”

The Swift debate recently came to a head when the singer revealed the title of the first track of her new album which will be released later this week, Lavender Haze. The reference to this colour, which is a symbol of LGBTQ resistance, fuelled Gaylors’ belief that she identifies with the community and wanted to share part of herself with her closest, queer fans who understood the relatively niche reference.

But the Gaylor celebrations were shortlived. Swift then explained on Instagram that the song was actually about the act of ignoring “weird rumours” to remain in a state of all-encompassing love; a love she attributes to her long-term male partner, Joe Alwyn.

The mention of “weird rumours” was interpreted by some Gaylors as a direct affront, squashing any previous queer-signalling held near and dear to the fandom’s heart. Several Gaylors used TikTok and Reddit to express their disappointment, triggering backlash from Hetlors and others who argued a celebrity’s sexuality shouldn’t be a topic for public debate.

Pablo The Don is a popular TikTok culture critic and Swiftie. They say theories about celebrities’ sexuality are perfectly fine in the privacy of a group chat. But when public platforms like TikTok become involved, these discussions about queer celebrity lose their nuance.

“People don’t realise the inherent privilege that a lot of white celebrities have by being unlabelled,” Pablo says. “They don’t do these [theories] about Black artists or Latino artists … Instead of spending your time trying to make up theories, or trying to assert the fact that something that we don’t know about a person is true, spend your time, money and effort supporting someone where we already know [they’re queer].”

In the lead-up to Swift’s new album, Midnights, the Gaylor v Hetlor debate has become so heated that the GaylorSwift Reddit page was made private and several of the more inflammatory TikToks – including one where Gaylors were referred to as Ukraine and Swift’s video as bombs intended for Russia – were deleted.

Despite these few controversial videos, McCann expresses concern over the extent of vitriol directed to the entire fandom, including accusations of forcefully outing the singer.

“Looking at the history of outing celebrities, this has all occurred in the media sphere, where gossip columnists and interviewers have pressed celebrities,” she says. “Society’s homophobia or queerphobia is the issue here … The desires of fans are not the real issue.”