Quick, clever and shy, phascogales finally get their close-up

Phascogales are usually too quick and clever to detect with spotlighting or trapping, so PhD candidate Jessica Lawton and La Trobe University researchers installed cameras at 50 nesting box sites in the Mount Alexander area.

What they found, Ms Lawton said, came as a “a really big surprise”. 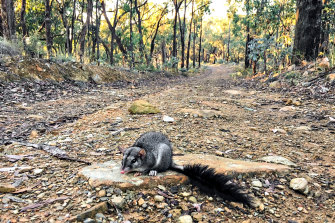 Caught on camera, brush-tailed phascogales visited 84 per cent of the sites, far more than the researchers expected, given the creature’s reputation for evading detection.

More of these bushy tailed critters are living in central Victoria than previously thought, thanks to plenty of forest cover and connecting habitats on farms, along roadsides and streams, the study found. The use of cameras was more effective at spotting phascogales, suggesting the species could be more widespread in other places surveyed using traditional techniques.

Their study is published in Austral Ecology.

It’s welcome news for the threatened species, already locally extinct from some regions, and comes as the state Parliament holds an inquiry into Victoria’s ecosystem decline and as Threatened Species Day draws attention to animals and plants at risk of extinction.

The research means actions by local landholders to retain habitat like logs, leaf litter and trees can help ensure the phascogale’s future.

An estimated 15,000 phascogales live in Australia, according to the International Union for the Conservation of Nature, but there are no robust estimates of population size, or Victorian-specific numbers.

Although found in several Australian states, central Victoria – where the study was conducted – is now one of the threatened species’ last remaining strongholds.

“We think phascogales are widely distributed there because they are supported by the large amount of forest, and they use the extensive connections along roadsides and creeks to move through the landscape,” Ms Lawton said.

On camera, one phascogale was filmed carrying nesting material, another eating “invertebrate food”, she said, most likely a spider, centipede or beetle.

Phascogales are usually active at night, relying on tree hollows for shelter and nest sites.

They require large areas of forest – up to 100 hectares – to roam and forage, looking for food in the bark of trees, in leaf litter on the ground, and on fallen timber and logs.

Males live fast and die young. They only last a year before dying from the stress of a frenzied mating season, often travelling quite far to find females, making use of scattered trees, small patches of vegetation, creeklines and roadsides. 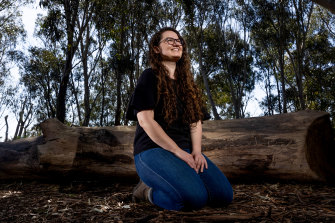 Ms Lawton said the study highlighted the need for both public and private land managers to conserve habitat in the region.

“Conservation reserves and large tracts of native forests are critical – but so are patches of forest, wooded strips along roadsides and creeks, and scattered trees across farmland”, she said.

The La Trobe University study used 50 of the 150 phascogale nesting box sites installed throughout the Mt Alexander region, near the township of Harcourt, by community conservation group, Connecting Country.

Ann-Marie Monda runs an organic goat farm and dairy. She has 30 nesting boxes on her property, including ones monitored as part of the La Trobe study and is a volunteer nest box checker for Connecting Country. 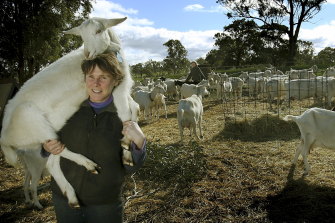 Ms Monda said it was a privilege to be involved in the study.

She said her love affair with “these exquisite small animals” with their small, pointy noses and tail “like a bottlebrush” began around 15 years ago when staying out at a bush shack one night she spotted a dozen phascogales.

She hopes the research means more people will know about the phascogale, and locals and landowners are actively engaged in efforts to protect them.

The brush-tailed phascogale is one of around 2000 threatened species in Victoria listed by the Victoria’s Department of Environment, Land, Water and Planning.