The Reserve Bank’s aggressive increases in interest rates may be softening the nation’s property market but consumers have yet to be cowed, sharply lifting their purchases from takeaway outlets, department stores and cafes.

Figures from the Australian Bureau of Statistics on Wednesday confirmed despite the large lift in official interest rates in a bid to quell inflation, the quantity of goods being bought by households is continuing to rise. 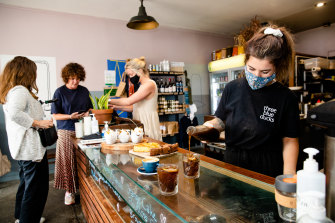 The RBA, which on Tuesday increased official interest for the fourth consecutive month to 1.85 per cent, is expecting a slowdown in overall economic activity due to its tightening of monetary policy.

But the ABS data showed the volume of goods bought by Australians in the three months to the end of June grew by 1.4 per cent. That is after a one percentage point lift in the March quarter.

The volume of goods bought through cafes, restaurants and takeaways jumped by 8.6 per cent in the quarter, following an 8.2 per cent lift through the first three months of the year. After being hurt by COVID-related restrictions, the volume of sales is now 14 per cent higher than ahead of the pandemic.

The volume of goods bought in the nation’s department stores grew by 3 per cent in the quarter and are now 11 per cent higher than in late 2019.

Consumers are also filling their wardrobes with new clothes and shoes, the volume of those purchases up by 3.9 per cent in the quarter to be almost 28 per cent up on their pre-pandemic level.

ANZ senior economist Adelaide Timbrell said the large lift in retail volumes, despite high inflation and recession-level confidence among consumers, pointed to the residual strength among the nation’s consumers.

“ANZ-observed spending for July has not fallen off a cliff, with discretionary spending categories such as non-food retail, dining/takeaway and travel excluding petrol showing continued momentum,” she said.

“Although a spending growth slowdown is inevitable given high inflation and rising interest rates, large savings buffers and strong labour market conditions are likely to delay and reduce these negative impacts on consumption.”

There are some signs of a slowdown in those areas that did best through COVID. Sales of food dropped by 0.8 per cent in the quarter while those of household goods slipped by 1.8 per cent.

Despite the drop in the June quarter, the amount of food sold is up by 2.3 per cent on its pre-pandemic level while household goods are up by 15.8 per cent.

Commonwealth Bank economist Stephen Wu said he also expects a slowdown in spending, in part due to high consumer prices and the drop in house prices.

“The volume of household goods retailing has been elevated since the onset of the pandemic, reflecting consumers spending more on the home. But recently, higher household goods prices has weighed on the volume of spending. The turning in the housing market has also likely had an impact,” he said.

Prime Minister Anthony Albanese said he would not interfere in the RBA’s decisions, noting the government’s focus was on cost-of-living measures it planned to deliver in the October budget.

“We know that people are doing it tough and we’re very conscious about the pressure that families are under,” he said.