House prices in the nation’s two largest capital cities have risen by hundreds of dollars a day this year and a new survey shows property industry experts are expecting this growth to continue over the next 12 months. 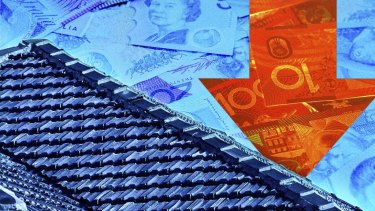 The regulators are getting ready to step into the property market and limit lending.Credit:Stephen Kiprillis

The Australian Prudential Regulation Authority has revealed it will lay out how it may intervene in the property market over the next couple of months, which could include limits on how much home buyers can borrow from the banks. This follows concerns from major banks, the International Monetary Fund, OECD and the Reserve Bank that the surge in prices is leading to financial instability.

Data to be released on Friday by CoreLogic is expected to confirm home values across the country continue to out-strip income growth despite major capital cities going into lockdown to stop the spread of the Delta coronavirus variant. Through the first 28 days of September, dwelling values in Sydney climbed by 1.7 per cent to be 23 per cent higher than a year ago. In Melbourne, values have climbed by 0.7 per cent through September to be 15 per cent higher than at the same time last year.

At its regular quarterly meeting, the Council of Financial Regulators – made up of the RBA, the Australian Securities and Investments Commission, the Australian Prudential Regulation Authority and federal Treasury – noted house prices were rising “briskly” and may pose risks to the economy.

“The recent lockdowns have reduced transactions and new listings, but prices are still rising briskly in most markets,” the council said in a statement. “The council is mindful that a period of credit growth materially outpacing growth in household income would add to the medium-term risks facing the economy, notwithstanding that lending standards remain sound.”

APRA has the capacity to impose so-called macroprudential rules on banks, such as imposing limits on particular types of lending or tightening income-to-loan ratios. The council said macroprudential policy responses were discussed and APRA would publish an information paper on a framework for implementing these controls over the next few months.

Both the OECD and the International Monetary Fund have called on Australian regulators to step in to cool the booming Sydney and Melbourne property markets by tightening lending standards. RBA assistant governor Michelle Bullock has also warned soaring housing debt could be a financial risk and Treasurer Josh Frydenberg has raised concerns about rising risks in the housing market.

The regulators’ statement noted Mr Frydenberg attended their meeting. He has been speaking with the regulators for months about the run-up in property values, saying intervention would be required if the market overheated.

In the past when the regulators have intervened investor activity has been at record highs, but home buyers have driven the latest boom. AMP Capital chief economist Shane Oliver said intervention was warranted but suggested first-home buyers be exempt from any lending crackdown.

“The main options are restrictions on how much banks can lend to borrowers with high debt-to-income ratios and high loan-to-valuation ratios and increased interest rate servicing buffers,” Dr Oliver said.

Carlos Cacho, an economist for investment and advisory group Jarden, said the tightening in lending standards was likely but is not imminent on the basis of the APRA paper being released over the next few months.

“While we still expect regulators will wait until early 2022 given the impact of lockdowns and the uncertain economic recovery, there is a risk that tightening could occur later this year, with regulators encouraged by the housing market’s resilience in the face of lockdowns.”

Capping high debt-to-income lending, where borrowers could only take on loans worth a certain multiple of their income, would have the biggest effects on investors with multiple mortgages, he said. Increasing the serviceability buffer, where borrowers are assessed against much higher interest rates, would affect all borrowers.

“With an election on the cards for early 2022 … we think any tightening will likely be modest – in our view a housing market correction in the lead up to the election will want to be avoided,” he said. “As such, we expect modest but visible measures that take some heat out of the housing market and publicly signal that action is being taken are most likely.”

A survey from the Property Council and ANZ released on Thursday shows values for residential property are expected to climb over the next 12 months in every capital, with Queensland, ACT and NSW respondents most bullish about the future.

The survey also asked about critical issues industry members want to see remedied by the federal government. Housing supply and affordability topped the list for the third quarter in a row followed by energy, environment and emissions and economic management.

Housing supply and affordability also topped the list of issues respondents wanted state and territory governments to tackle, followed by property taxes and charges and planning and regulation reform.

“Of the issues affecting housing affordability, including record low interest rates and less properties being listed during COVID, supply of properly planned land is a major factor in keeping prices down,” Mr Achterstraat said. “A housing-led recovery through faster and more streamlined approvals in NSW can assist our economic recovery from the pandemic.”

A federal inquiry into housing supply and affordability is currently underway.

The Business Briefing newsletter delivers major stories, exclusive coverage and expert opinion. Sign up to get it every weekday morning.