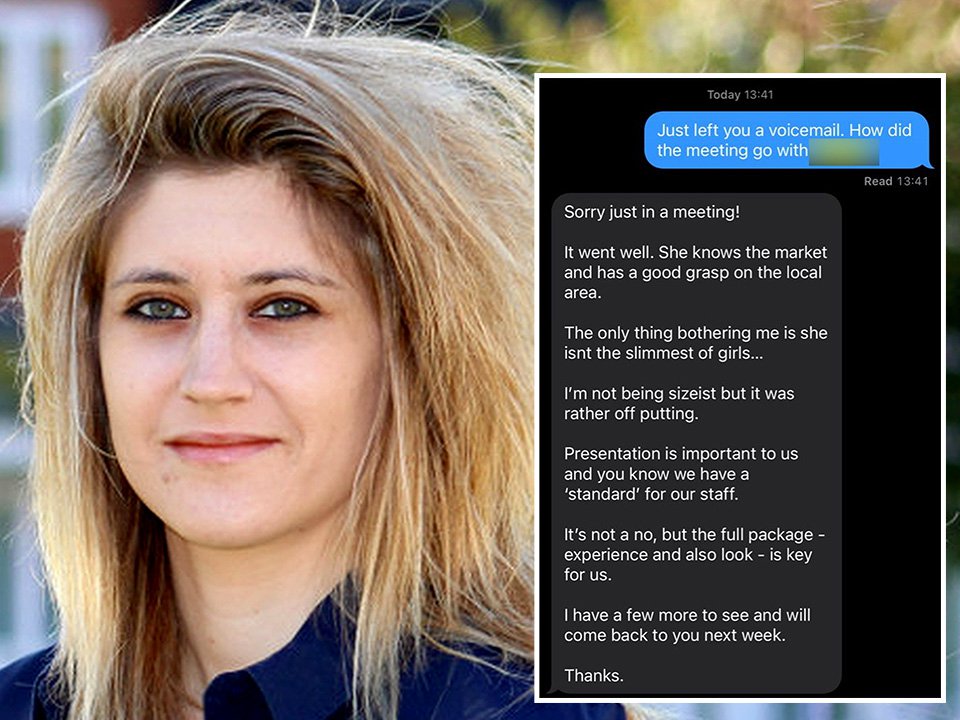 You would hope that, in 2021, a woman wouldn’t be judged by her appearance when applying for a job.

However this week, a recruiter has gone public with an incident of discrimination that – rightly – outraged her.

According to the hiring firm themselves, the woman going for the job had a ‘good grasp on the market and knows the local area.’

However, apparently actually having the skills to do the job well was overshadowed by the woman’s build.

In a text exchange which Angeletta has since posted to LinkedIn, the interviewer said that it wasn’t a ‘no’ but added, ‘the only thing bothering me is she isn’t the slimmest of girls.’

They tried to justify this by saying, ‘I’m not being sizeist but it was rather off putting. Presentation is important to us and you know we have a standard for our staff.’

The Collins definition of the word ‘sizeist’ is: ‘discriminating on the basis of a person’s size, esp. against people considered to be overweight.’

For context, the jobseeker in question was a size 16.

This is actually the average dress size for women in he UK. In fact, 45% of British woman are size 16 or bigger. We’re also living longer, and exercising more.

Angeletta decided to remove the candidate from the recruitment process, calling the employer ‘absolutely disgusting’.

When describing following up with the interviewer, Angeletta said: ‘On the phone he said, “well, you know, I worry for the stairs that we’ve got in the show room or her having a heart attack”. He was a slimy, horrible man. He laughed down the phone.’

Angeletta later spoke to the jobseeker, who had recently been dealing with a cancer diagnosis, and decided to be honest with her about the feedback – so they could ensure that her client didn’t engage with that company again in future.

She said: ‘I’ve been working in recruitment for seven years. It was unbelievable. I absolutely couldn’t believe he’d put it in writing.

‘I recruit in new homes sales and it is an industry full of drop-dead gorgeous people. In customer-facing roles, there is an expectation for presentation and it comes without question you need to look the part on site.

‘However, if you want to recruit on the basis of appearance over ability, maybe try a modelling agency.

‘Naturally, I have pulled the candidate from the running and made the client aware we are no longer interested in working with them. He didn’t seem to see the issue (of course) and hung up on me along with some other rude words in the mix.’

Angeletta has said that size definitely isn’t the only thing that sees potential candidates being discriminated again. She claims that recently, one woman was rejected because she would soon get married and the hirer was worried she might get pregnant.

‘I said I didn’t know what it meant and he said he needed someone committed and people change when they have children.’

What a depressing time to be alive.