Singapore: Foreign Minister Penny Wong has signalled a strengthening of security ties with Vietnam just days after Hanoi condemned a Chinese military exercise in the South China Sea as a serious breach of its sovereignty.

In the first stop of a four-day trip in south-east Asia that will also take her to Malaysia, the country of her birth, Wong on Monday met in the Vietnamese capital with President Nguyen Xuan Phuc, Prime Minister Pham Minh Chinh and Foreign Minister Bui Thanh Son. 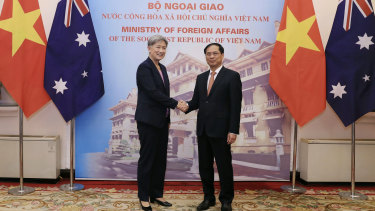 Addressing an audience at the Ho Chi Minh National Academy of Politics, she said it was the new Australian government’s ambition to expand strategic, defence and security cooperation with Vietnam, as well to further economic engagement and innovation links.

“Our two countries share an interest in a region that is peaceful, prosperous, that is stable, in which sovereignty is respected,” Wong said.

“A region where disputes are settled peacefully in accordance with international law and norms, not by size and power.”

She did not mention China by name but her speech came only four days after the latest flare-up in uneasy relations between Beijing and Vietnam over the South China Sea.

One of multiple claimant states to territory in the strategically key waterway, Vietnam last week reacted angrily to news of a Chinese military drill on June 19 in the Paracel Islands, which it regards as its own and calls the Hoang Sa archipelago.

Deputy Prime Minister Richard Marles also took aim at China’s militarisation of the South China Sea in an appearance at the Shangri-La Dialogue defence summit in Singapore this month.

He sat down there with China Defence Minister Wei Fenghe – the first in-person meeting at ministerial level between the two countries for nearly three years – but maintained that Australia would not waver from asserting its national interests “in the strongest possible terms”.

At the same time Wong is looking to reset Australian ties in south-east Asia, with her visits to Vietnam and Malaysia just three weeks after she joined Anthony Albanese in Indonesia in what was his first bilateral visit abroad as prime minister. 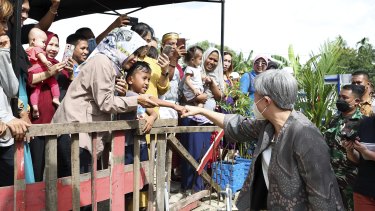 Wong has been busy in the region since Labor’s election, having also travelled to Indonesia with Anthony Albanese last month.Credit:Alex Ellinghausen

“The partnership between our countries is grounded in trust,” Wong said in Hanoi on Monday.

Opening the new Vietnam Australia Centre, which will draw on Australian expertise to develop future leaders in the communist nation, she said the starting point of the Albanese government was “always to listen”.

“We want to understand your perspectives on the opportunities and challenges we face and how we can meet them together,” Wong said. “We understand the importance of concrete actions, not just words, to sustain and grow our shared prosperity, particularly at this challenging time.”

Vietnam is further establishing itself as a global manufacturing hub and trade with Australia is on the up. Over the first five months of this year, trade between the countries hit a record $9 billion, up 32 per cent on the same period in 2021, Vietnamese consul general Nguyen Dang Thang told a meeting of the Australia-Vietnam Business Council in Sydney last Thursday. He said two-way investment exceeded $3.5 billion, with 75 per cent of it Australian money in Vietnam.

Australia and Vietnam have for more than two decades cooperated on training of defence personnel and in 2018 signed a strategic partnership focusing on their security association as well as building economic relations.

Wong flies to Kuala Lumpur on Tuesday before heading to Kota Kinabalu, the city on the island of Borneo where she was born.