Joining the duo on their adventures is LeFou’s stepsister, Tilly, played by Briana Middleton.

Gaston and LeFou are coming to Disney+ — and now, we finally know what the heck their new show is going to be about.

Though it’s been in the works for some time now, the streamer officially greenlit the show — tentatively called “Beauty and the Beast” — on Tuesday, confirming both Luke Evans and Josh Gad will be back as their characters from the 2017 live-action adaptation of the animated classic. 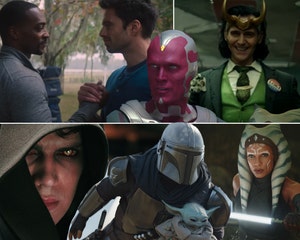 Like the film, the eight-episode limited series will also be a musical — with composer Alan Menken handling the soundtrack and Glenn Slater (“Tangled”) writing the lyrics for the first episode. Also joining the show is Briana Middleton, who was cast as LeFou’s stepsister Tilly.

Below is the official synopsis:

Set in the iconic kingdom of “Beauty and the Beast” years before the Beast and Belle’s epic romance, the series will follow Gaston and LeFou as they set off with LeFou’s step-sister, Tilly, after a surprising revelation from her past comes to light, sending the unlikely trio off on an unexpected journey filled with romance, comedy, and adventure.  While the mysteries of the past are uncovered and the dangers of the present grow, old friends and new enemies reveal that this familiar kingdom harbors many secrets.

Gary Marsh, president and chief creative officer at Disney Branded Television, promised the series would explain “how a mystical enchantress came to cast that fateful spell” on the Beast and delve into the origins of LeFou and Gaston’s friendship. He also teased that the show would “provoke a whole new set of questions.”

Production on the series kicks off in Spring 2020, meaning we all have some time to wait to see this new trio in action.