As stages around the world prepare to reopen their doors, Sutton Foster’s first role back is a special return to her Tony Award winning role of Reno Sweeney.

Right off of wrapping up her role of Liza on Younger after 7 seasons, Sutton Foster jetted off to London to prepare for her West End debut in the role she won a Tony Award for back in 2011. “There’s so many things happening!” she gushed while chatting to HollywoodLife, exclusively. “I’m revisiting a show that I did 10 years ago. I’m in a rehearsal room for the first time in over 15 months. It’s a really and emotional and exciting time.” Sutton was the obvious choice to fill the shoes of Megan Mullally in the London production of Anything Goes when she needed to withdraw due to an injury.

“When I was first working on Reno 10 years ago, she felt incredibly hard to access. I felt like I almost didn’t have enough worldliness to play her and it took me a while until I felt comfortable in her skin,” Sutton said of the brassy and confident Reno Sweeney. “It is interesting approaching her now with more life experience and a few more trials and tribulations under my belt. I hope I’ll be able to bring all of that to her.” The Broadway favorite added that she “never in a million years” thought she would return to the role. 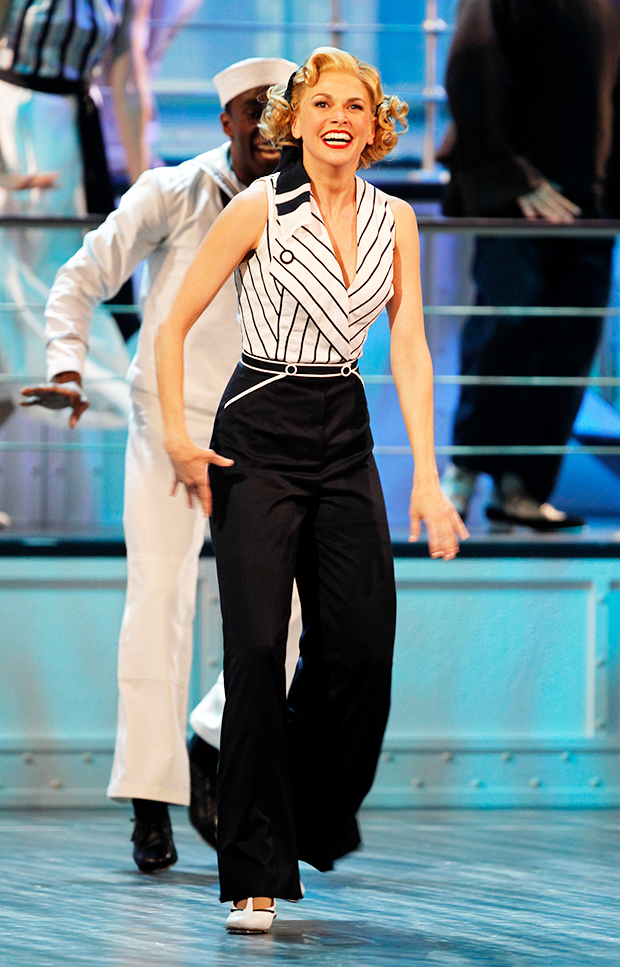 “I’m just so excited to create theater again,” she gushed. “I could burst into tears. It’s really incredible.” Sutton admitted that upon arrival to her first rehearsals, she was “a little bit like the Tin Man” and “a little rusty!” She added, “In many ways, it’s so familiar, because I spent 30 minutes of my life in the theater and it’s something I know very well. But, everyone in the room right now is kind of finding our sea legs again… pun intended.”

Sutton spoke to HL in partnership with Banana Boat to help launch the sunscreen brand’s new biking challenge, Pedal For Our Planet.  In partnership with fitness and cycling tracking app Strava, the brand  invites families to hop on their bikes this summer and give back to Mother Earth while having fun. “This past summer, when everything was shut down, I was biking all the time and I’m such an advocate for biking because I have a four year old daughter and I love spending time outside with her,” Sutton explained. “We hike a lot and are in our garden and we bike, and Banana Boat is always our go-to sunscreen.”

To participate in the Pedal For Our Planet challenge, users must download the Strava app on their smartphone, set up their profile and join Banana Boat’s Pedal for Our Planet challenge via the Banana Boat cycling page. The challenge will run for two weeks from June 24 through July 7. For each challenge completed (a 10 mile bike ride) participants log in the app, Banana Boat will make a donation to the Captain Planet Foundation, which engages and empowers younger generations to be problem solvers for the planet.