Home » Lifestyle » The TODDLER from hell

The toddler from hell: Like The Omen laced with laughs, a demonic child ruins a woman’s life in crazy new comedy The Baby

We all know babies can be hard work, what with the tantrums, the mess and the sleepless nights. But imagine if your child actually took over your life, while exhibiting malevolent powers that seem to be bringing harm to others.

Dark new British comedy-horror series The Baby takes this idea and runs with it, and over eight unpredictably compelling episodes, we see one woman’s life implode when she’s landed with the toddler from hell. But it’s also hilarious – think The Omen laced with laughs.

The show centres on chef Natasha (charismatic comedian Michelle de Swarte in just her second ever acting role), a woman who’s never wanted a baby but suddenly finds herself with one. When we meet her she’s just found out her best friend is pregnant, while a poker evening with her girlfriends has been ruined by another of her pals’ babies.

The last thing she wants is a child of her own – or at least that’s what she thinks – so she takes herself off to a remote seaside cottage while she tries to figure out why it’s annoying her that all her friends are becoming mothers. 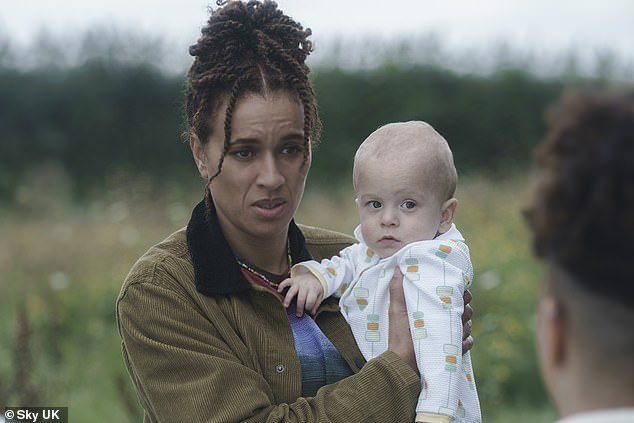 Dark new British comedy-horror series, The Baby, deals with children taking over. The show centres on chef Natasha (played by Michelle de Swarte – pictured), a woman who’s never wanted a baby but suddenly finds herself with one

Then there’s a loud thump. A body has fallen from the cliff above and landed next to her cottage.

The next thing she knows a baby has fallen into her arms, and it quickly emerges that this child wants Natasha for its mother and no one else. When she appeals to various people to take the baby off her – two policemen and an attendant at a petrol station – they’re all killed in bizarre accidents.

‘The show is original and bonkers,’ says co-creator and producer Lucy Gaymer. ‘The concept just came from this idea in my head, ‘What if a woman in her 30s doesn’t want a baby, but one falls out of the sky?’ She catches it and then she can’t get rid of it.’

The eight-part series mines its humour from the everyday scenarios parents face such as explosive nappy accidents, to the more macabre like when an interfering mother has a finger lopped off as she tries to show Natasha how to manoeuvre her buggy. 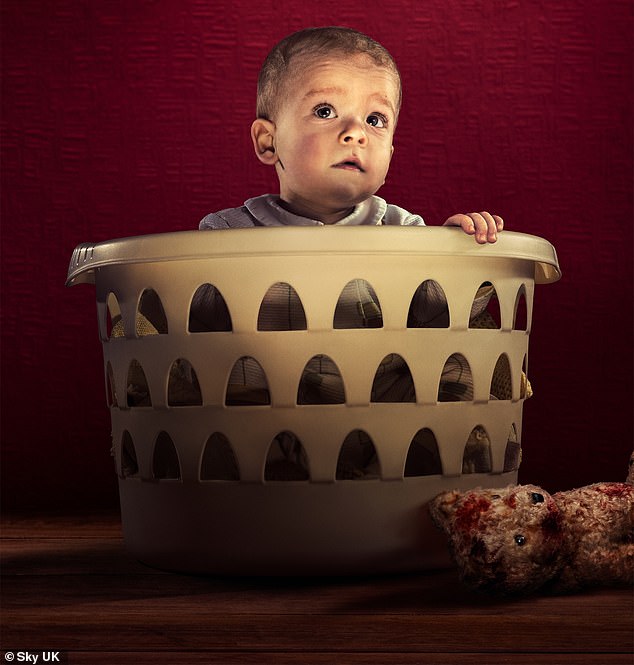 The eight-part series mines its humour from the everyday scenarios parents face such as explosive nappy accidents, to the more macabre like when an interfering mother has a finger lopped off as she tries to show Natasha how to manoeuvre her buggy

Like Outnumbered, Motherhood and Breeders before it, which don’t hold back in showing how difficult parenthood really is, The Baby is never subtle, but it is tremendous fun.

‘As Michelle is a stand-up comedian, she holds the comedy in her hands,’ says Lucy. ‘It’s nice creating a character you love then meeting the actor who makes that character materialise.’

As a viewer, you’re never sure whether the baby is the monster Natasha believes it to be, or whether she’s just having a hard time looking after it. But it’s clear that Natasha wants her old life back.

The story becomes even more compelling as we learn more about why Natasha has always rebelled against the idea of motherhood, before a mysterious figure from the baby’s past turns up on a sinister mission.

‘The show explores the tension between this idealised version of motherhood that’s offered up to us and the reality of what motherhood looks like for a lot of people,’ says co-creator and writer Sian Robins-Grace. ‘We’re trying to show why the experience of motherhood can be oppressive, especially for people who don’t conform to that mainstream idealised notion of a mother.’

Michelle, who’s 41 and grew up in Brixton in south London, was discovered by the show’s producers when the casting director saw her doing a comedy show over Zoom during the pandemic, and she fell in love with the script as soon as she read it.

‘I felt like it was written for me,’ she says. ‘It was super-refreshing. When you have a reproductive system, you’re definitely aware of a timeline, and for me this is partly a commentary on how women are treated in their 30s, whether they choose to have children or not.’

The maddest element for Michelle is the way Natasha talks to the baby because she’s convinced it understands everything. 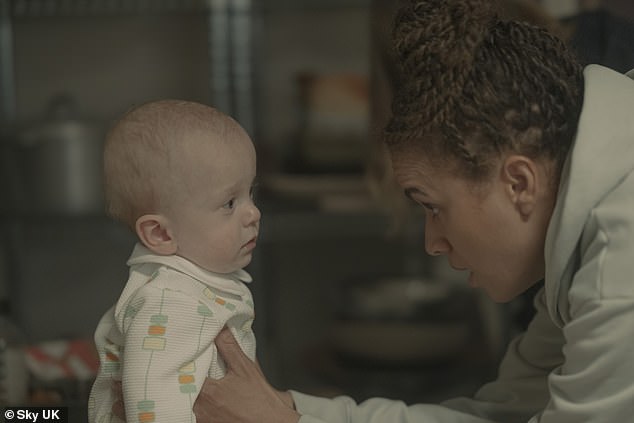 Unsurprisingly, filming with the child (the baby was played by a pair of twins) proved challenging. As well as the twins’ parents on set, there was a midwife and a ‘baby-wrangler’

‘Any time you interact with a baby, you instinctively want to do it in a sing-song voice,’ she says. ‘But Natasha talks to the baby like it’s an adult and that takes a little bit to get your head around.’

Unsurprisingly, filming with the child (the baby was played by a pair of twins) proved challenging. As well as the twins’ parents on set, there was a midwife and a ‘baby-wrangler’ (an expert who can apparently make the baby smile and giggle on cue), along with stand-in prosthetic babies.

It was toughest for Michelle as the baby never leaves Natasha’s side.

‘Ultimately you’re filming around the babies’ schedules,’ she says. ‘So it’s working around their nap times, and the number of takes you do is dependent on their mood.

‘You have to accept that. The babies are not aware that you’re trying to make a television show. They’ll be like, ‘We’ve done a few takes, I’m over it now.’

And just like real life, the baby is in charge in the show. But where does it come from? What does it really want?

And what lengths will Natasha have to go to in order to get her life back? You’ll just have to tune in for the answers…