Both actors were nominated for Outstanding Supporting Actor in a Drama.

Tobias Menzies dedicated his Outstanding Supporting Actor in a Drama Emmy to his co-nominee, the late Michael K. Williams.

Menzies took home the award on Sunday for his work in “The Crown,” while Williams, who past away earlier this month, was up for “Love Country.” 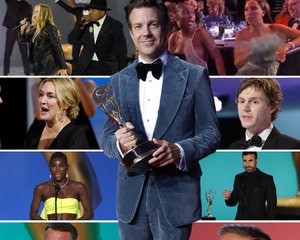 2021 Emmy Awards: The Most Viral Moments of the Night

The British actor took to his Twitter on Monday to say he was “humbled” to receive such an honor and congratulated his “brilliant fellow nominees,” after not appearing during the telecast.

He concluded, “But want to dedicate this to Michael K Williams, his performance as Omar in ‘The Wire’ is one of the great screen performances, he will be deeply missed. RIP🙏.”

Considered one of the great character actors, Williams made his mark in HBO’s “The Wire” and “Boardwalk Empire.” He also received Emmy nominations for his work in “Bessie,” “The Night Of” and “When They See Us.” On the film side, Williams also appeared in “12 Years a Slave,” “Gone Baby Gone,” “The Road,” “Assassin’s Creed” and the 2016 “Ghostbusters” remake.

Williams was found dead in his Brooklyn apartment on Monday, September 6 due to a suspected overdose at the age of 54. His death occurred after the Emmy voting period was closed and the actor was considered a favorite to win.

Jurnee Smollett, Williams’ costar in “Love Country” who was nominated as well, paid tribute at the awards show with a silver hair accessory with Williams’ initials.

Kerry Washington also took a moment to remember him before presenting the award for Outstanding Supporting Actor in a Drama Series.

“Michael was – crazy to say was – a brilliantly talented actor and a generous human being,” she said. “Michael, I know you’re here, because you wouldn’t miss this. Your excellence, your artistry will endure. We love you.”

The actor was honored during the annual In Memoriam segment of the show, where actress Uzo Aduba started her introduction with, “Over the past year, we have lost so many of our loved ones, but we treasure our memory of each of them and we rejoice in having them in our lives.”