Domestic violence victims are ending up saddled with Centrelink debts and facing prosecution because their partner has given false information or coerced them into concealing the relationship.

Welfare rights advocates say there is little legal recourse for victims to waive debts because, under the law, both people in a couple are responsible for the information given to Services Australia even in cases where there is violence or abuse. 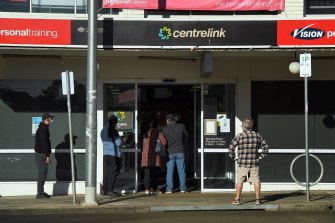 The law prevents Centrelink debts from being waived if false information is given even if it’s the result of an abusive relationship.Credit:Kate Geraghty

Illawarra Legal Centre solicitor Ian Turton says if there’s any “deliberate conduct” involved in the debt, there can’t be any appeal to have it waived. In many cases, victims also face prosecution.

“And we’re talking about social security recipients, people on low incomes, who are left with debts that they may never be able to repay, it’s always going to be over their head. It’s a real problem.”

Daniel Turner, a lawyer with the Sydney-based Welfare Rights Centre, said it was also common to find a perpetrator had coerced a victim into hiding their relationship from Centrelink and then threatened to dob them in.

The greater push to have most interactions with Centrelink happen online could also make it more difficult to control who was really in charge of an account, Welfare Rights and Advocacy Service WA principal solicitor Catherine Eagle said.

“It’s not a situation where you’re walking into Centrelink, and it’s apparent to the worker that the guy’s literally standing over you. It’s all happening online,” she said.

The lawyers say Services Australia staff are getting better at assessing when there is abuse in a relationship, but there was often little that could be done because of the way the law is written.

There is a session on economic security and escaping financial abuse, but it is unclear whether it will examine the welfare system.

Social security should be central to any discussion of women’s safety because the reality was it was often difficult for women to escape abusive relationships without financial support, EJA chief executive Leanne Ho said.

The organisation wants legislative changes to make sure liability for paying back debts rests with the person who benefited from the overpayment, and to remove barriers to waiving debts resulting from domestic violence.

“An amendment is necessary to the legislation to make it very clear that the presence of domestic and family violence is a reason not to treat a person as a member of a couple,” Mr Turner said.

“If someone comes to us and says that they haven’t been disclosing their circumstances to Centrelink because their partner’s stopped them from doing so, there’s very little they can do that doesn’t put them in financial jeopardy or jeopardy of prosecution.”

Stella Avramopoulos, the head of Good Shepherd, a charity that supports women experiencing abuse or disadvantage, intends to highlight the vital role of economic independence throughout the summit. She said if policymakers were serious about ending domestic violence, women’s economic security had to be a major prevention strategy.

Women’s Safety Minister Anne Ruston said the summit was the culmination of extensive consultations to develop the next national plan to end violence against women and children.

“The summit will further elevate the important national discussion we are having about women’s safety and ensure that we bring all people along with us as we develop the next national plan,” she said.