‘Your husband is a lucky man… was’: Widow shares nonstop flirty messages from her late spouse’s co-worker, who begged her to go on a date a MONTH after her husband died

A horrified widow has shared the sexually aggressive messages that her late husband’s coworker sent her, in which he praised her ‘f**kable hips’ and asked her out on a date — just one month after her husband died.

The widow posted screenshots of the ‘inappropriate’ and ‘creepy’ conversation on Reddit, capturing how the man began by telling her she was ‘beautiful’ and he didn’t want to ‘screw up’ his ‘chance’ with her.

‘Your husband is a lucky man,’ he wrote, before correcting himself: ‘Was.’

When the woman made it clear she was not interested, the man continued to beg, insisting: ‘Your husband would want you to be with a man he knows will treat you right. In all ways.’ 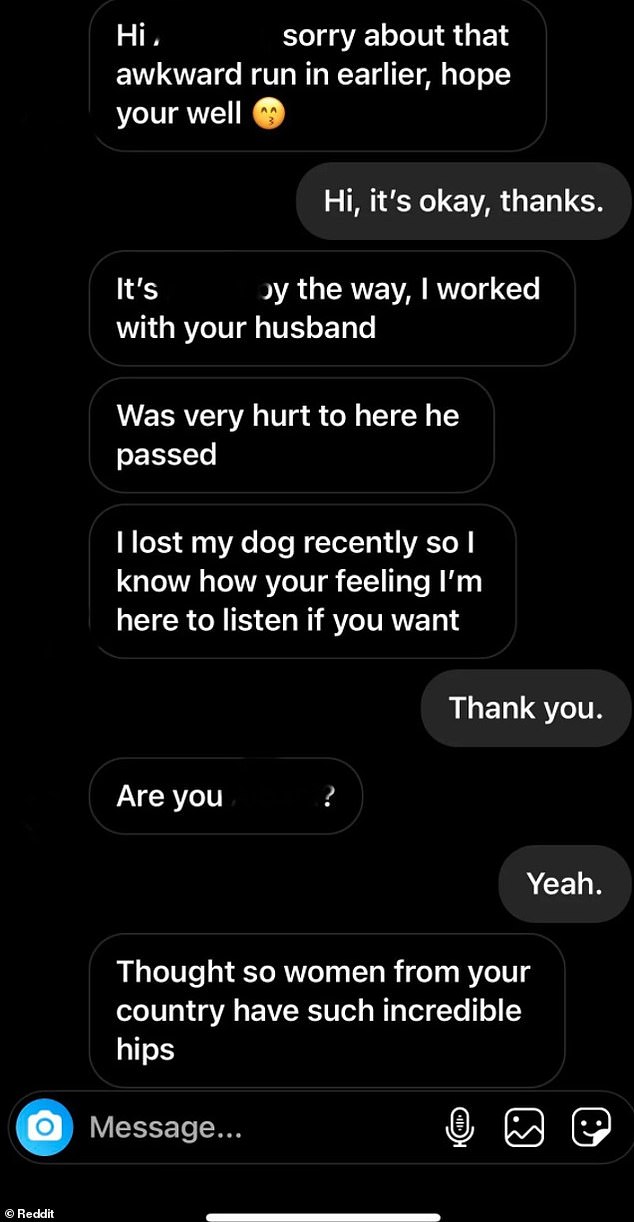 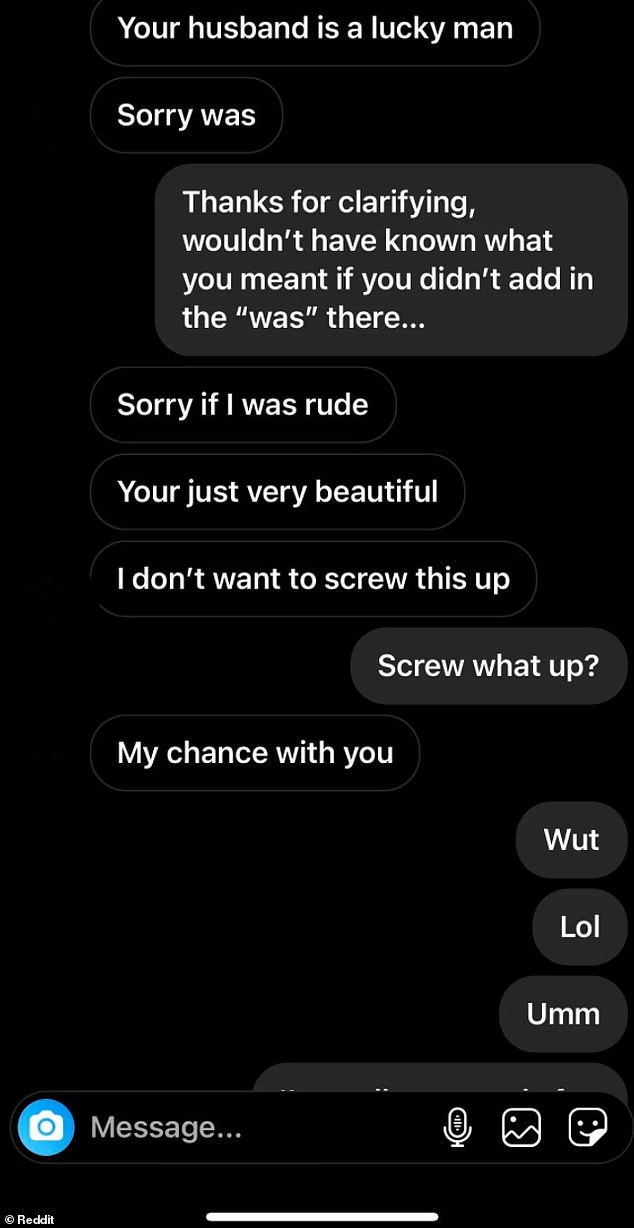 ‘Your husband is a lucky man,’ he wrote, before correcting himself: ‘Was’ 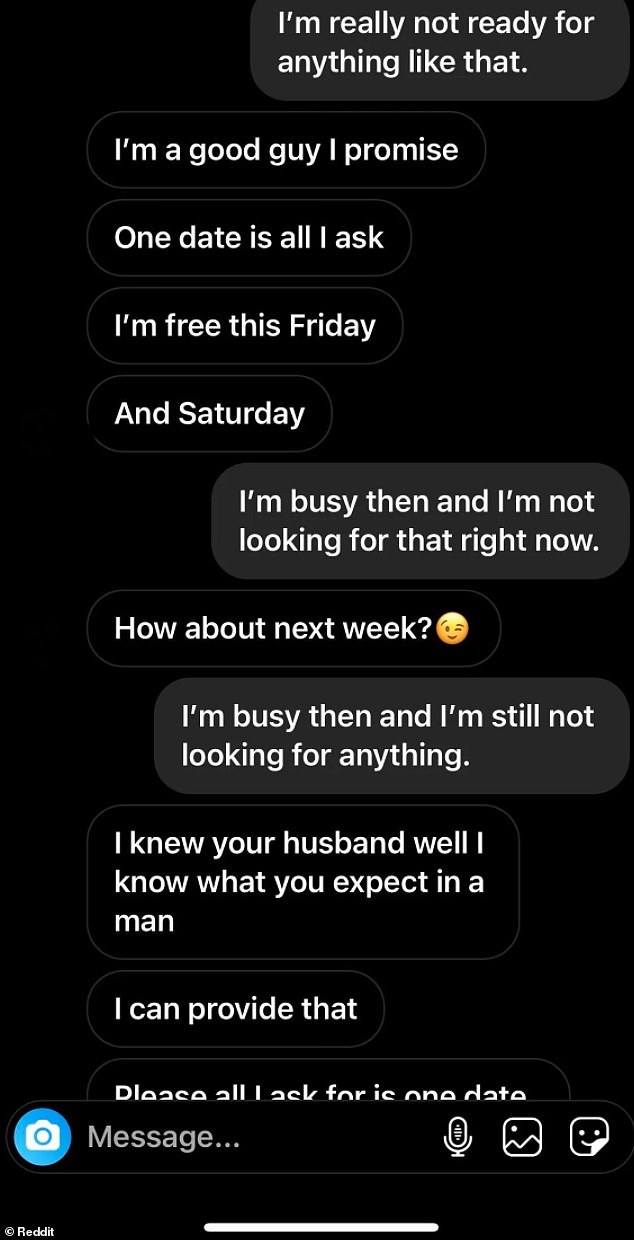 He asked her if she wanted to get dinner with him, adding that because he ‘knew her husband well,’ he understood ‘what she expected in a man’

The man and the widow appear to have run into each other in person before the exchange began with an Instagram DM.

He immediately referenced her husband’s death in an incredibly tone-deaf way.

‘Was very hurt to hear he passed,’ he wrote. ‘I lost my dog recently so I know how you’re feeling, I’m here to listen if you want.’

He went on to ask about her nationality — which has been blurred out — and told her, ‘Thought so. Women from your country have such incredible hips.’

After telling her that her husband is — no, was — a lucky man, the woman snapped.

‘Thanks for clarifying, wouldn’t have known what you meant if you didn’t add in the “was” there,’ she replied.

He then apologized for being ‘rude’ and said he just didn’t want to ‘screw this up.’

‘Screw what up?’ she asked, to which he answered, ‘My chance with you.’

The woman wrote back that she was ‘not ready for anything like that,’ but the man would not take no for an answer.

When she reiterated that she wasn’t interested, he asked: ‘How about next week?’

‘I knew your husband well and I know what you expect in a man. I can provide that,’ he said. ‘Please, all I ask is one date. You’ll see I’m worth it.’

The woman told him once again that she was not interested in dating right now, and asked him to ‘please respect her choice.’

‘Of course I respect women [and] their choices,’ he said before the rejection began to sting and he turned nasty.

‘Should have known you were just a pretty face. You aren’t even that pretty,’ he wrote.

But he still decided he wasn’t ready to give up, writing: ‘Sorry if I upset you. That was wrong of me. Let me make it up to you. Dinner on me.

‘I’m free tonight,’ he continued. ‘I’ll bring food. I still [have] your address from when I came over.’

The woman responds simply: ‘No.’

‘Your husband would want you to be with a man he knows will treat you right. In all ways. I’m good at taking care of women. Especially ones like you. Such f**kable hips.’

In the comment section, the woman said she always thought he was ‘weird,’ and that she was considering sending the screenshots to his boss

Comments slammed the man, calling him names like ‘a total piece of s**t’ and ‘psychotic’ and sent the woman their support

In her final message to him, the woman replied, ‘I am way too sober to deal with this, bye lol.’

In the comment section of the post, the woman said that the man sent her four more messages after that, but she didn’t reveal what he said in them. She also said she always thought he was ‘weird,’ and that she was considering sending the screenshots to his boss.

Commenters found the interaction unsettling and took to the comment section to slam the coworker, calling him names like ‘a total piece of s**t’ and ‘psychotic.’

‘What criteria do you have to meet to get a restraining order because this is some psycho s**t,’ one person wrote.

‘Honestly, I can’t tell if this is even real it’s so utterly tone-deaf and inappropriate. My first and only advice would be to contact his boss and send these screenshots,’ another added. ‘He’s [a] complete and total piece of s**t.’

‘I’m actually stunned,’ someone else said. ‘I’ve met plenty of a**hole guys but this is on a different level. This is dangerously creepy.’

Another Reddit user wrote: ‘I’m sorry your husband passed. I’m doubly sorry that this waste of skin is about as selfish and clueless as they come.’