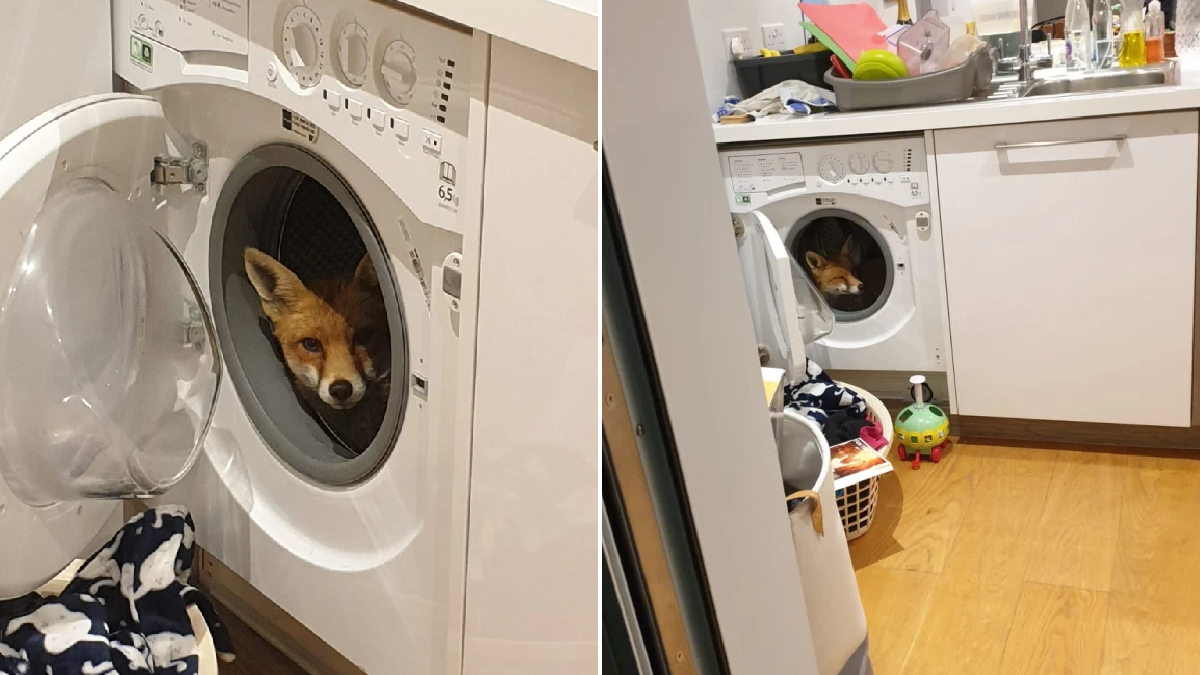 A woman was shocked after finding a furry companion in one of her household appliances.

Natasha Prayag had just arrived back at her Streatham home after visiting her partner’s parents – but, unknown to her and her boyfriend, Adam, a cheeky visitor had managed to sneak through the open front door.

After getting bags from the car, the couple turned around and were surprised to see a fox chilling in their hallway.

However, upon seeing Natasha and Adam, the animal bolted off inside.

Content manager Natasha said: ‘The initial reaction was shock and alarm, which turned into curiosity.

‘As it was dark we decided to double-check it was in fact a fox. We both carefully peeped our heads around the kitchen but couldn’t see the fox.

‘Adam looked behind the kitchen blinds, which reach the ground, and even in the cupboard – the fox had disappeared.’

But Adam soon spotted a little ear peeping out of the drum of their washing machine.

Natasha explains that she thinks the small, dark space offered the creature a sense of security.

After taking a few snaps, the 32-year-old tried to tempt him out with some food.

She added: ‘You can see it looks quite relaxed from the pictures we took – almost quite happy.

‘We tried to coax him out first by whistling, then banging around a bit but he held steady.

‘I eventually got some food from the fridge – my little one’s pea pasta – put in a Tupperware box and placed it outside to lure him out.

‘After a few minutes he slowly creeped out and towards the pasta that was placed in the garden. However, he smelled the pasta then ran off out the back gate into the street.

‘He stopped, came back, sniffed pasta again then ran off. At this point, we closed the kitchen/garden doors in case he wanted to return.’

Natasha said: ‘Foxes can be seen as a nuisance but like any other creature, they are simply trying to ensure their survival.

‘The fantastic fox in the washing machine seemed very relaxed and no threat to us so we treated it as such.’

She also received some hilarious replies from people saying the unusual places they have found foxes.

One person said: ‘I had one in the bath at 4am, left the back door open on a warm night. Cats were not impressed.’

Another added: ‘I raise you with a fox enjoying a nap in my son’s bed.’

I raise you with a fox enjoying a nap in my sonâs bed! pic.twitter.com/eT2mnZ3rO2

Natasha is now offering advice to anyone who finds themselves in a similar situation.

‘It turns out there are some wonderful charities, including the Fox Project, that will offer advice and assistance if you find yourself in a fox conundrum – or, in my case, a fox in your drum,’ she adds.