Home » Sport » Faster, higher, stronger together: Why Tokyo Games were made for these times

Sport might be the opiate of the masses, but don’t the masses need an opiate.

Tranquilliser, escape hatch, fantasy – everything that Karl Marx derided about religion in his time might be transformed into positive medication in ours. The patient is sick, and Tokyo 2020 has been manufactured for the purpose of alleviating symptoms and lightening the heart. In matching like for like, these Olympic Games might almost have been invented with a global pandemic in mind. 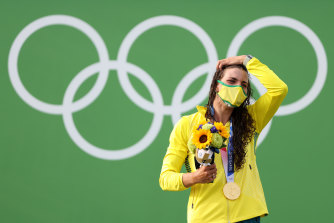 An emotional Jessica Fox celebrates a gold medal a lifetime in the making in Tokyo.Credit:Getty

Which is not to say that the thing won’t yet go off the rails. The threat of deadly outbreaks is constant and growing. The bill for the people of Japan, both financial and medical, is yet to fall due. The International Olympic Committee is only pure and heroic when it is playing its favourite sports of speech-making and self-congratulation.

When it comes to an overview of these Olympics as an entire event, you at home — locked down and couchbound in Channel Seven’s folksy embrace — would have a better idea than I. ‘The Olympics’ are best grasped from the home command centre.

On the ground in Tokyo, there is no sweeping overview, only a sequence of separate vectors viewed from inside a person-sized bubble. These Olympics have been created as a replica of Rio 2016, which were bubble-ised for security reasons. For those attending Rio, it was not just a gruelling daily experience but an inescapably subjective and limited one. Your passage was from bus to queue to bus to barricades to check-in to screening to form-filling to being directed here, no there, like one gigantic Communist-era package tour. Finally, at the end of the rainbow, lay a sporting event, and somewhere on the horizon of that, the distilled essence of the games, the drama of medals won and lost.

Tokyo 2020 is similarly modelled to keep the games isolated from the population; except that in Rio there were spectators in attendance to remind you that there was a population, and that there existed civilian ways of witnessing an Olympic Games. In Tokyo the bubble is the only reality. The defining image is not the mascot but the face mask. 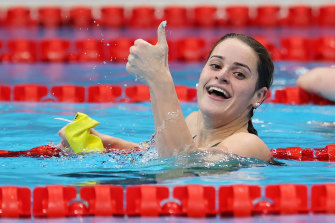 Are these Games best experienced from the comfort of a locked-down Australian loungeroom? F–k yeah.Credit:Getty

The Japanese presence is confined to the unfailingly friendly workforce, ever-willing if not always able to help the visitor surmount the inconvenience, bureaucracy, excessive infrastructure and confusion, the cumulative price that has to be paid for separating people from each other and putting on a 16-day event that is simply too big to handle. I know Queenslanders pride themselves on their friendliness, but in the circumstances, the people of Tokyo have achieved a standard that will never be topped. And to see so many beautiful, state-of-the-art venues, all set up for crowds, right down to the footprints painted on the ground outside the toilets to show people where to stand – you just can’t help feeling gutted for what this country has paid for and been denied.

This duality of isolation and connection is the paradox and, in a sense, the miracle of Tokyo 2020. While these Olympics have been all about insulating people from each other, they have also bound people together. ‘Together’ is the two-sided buzzword of the games. The people of the world are more in sync already, because they are all suffering from this pandemic. That’s the kind of ‘together’ that has to work across masks, Perspex barriers and 1.5 metres. But just as the virus is an invisible connection, so is sport itself. And here’s the magic.

In the first week, the emotional tang of winning and losing has felt sharper than in other Olympiads.
As Australians, invested in national success, we have shed tears with Ariarne Titmus and Jessica Fox, laughed ‘f–k yeah!’ with Kaylee McKeown, danced with Dean Boxall, and plumbed the depths with those who have left in disappointment and dismay. Ups and downs alike have transported us out of our bubbles, out of where we are, and reattached us to the inner lives of others.

As a result, millions have been hit with an outbreak of compassion that sport, spontaneous and unscripted, has a unique capacity to produce. Rivalries between athletes don’t seem as personal as they were in other Olympics. When James Magnussen tried to stir things up by calling Katie Ledecky a ‘flat-track bully’, it sounded like a throwback to an earlier and now irrelevant era. No swimmer would say something as silly now as Gary Hall jnr’s threat to ‘smash ’em like guitars’. Every one of the athletes in Tokyo share a gratitude that they are able to be here – even that they can imagine, via the signage, that this is Tokyo 2020. They are making it 2020, and damn the calendar. There is a genuine sense of thankfulness, and it has shoved more trivial matters aside. (I predict that those athletes who pulled out of the games because it wouldn’t be ‘a real Olympics’ without crowds are already experiencing the same regret as the citizens who fled Sydney in September 2000 because it would be too hard, and consequently missed all the fun.)

This surge of common feeling flowed through the response to Simone Biles’s withdrawal from the all-around gymnastic events. Sure, some were telling her to harden the f— up, but they echoed hollowly, belonging to an era when hardening up was the cure for all shortcomings. Much of the kindness cult that has accelerated during the pandemic is staged and insincere, but much more of it is genuine. Biles received the gift of global empathy. The Olympics, by training the world’s attention on one fragile individual, has provided a focus for the values that count.

Needless to say, this all goes better when the IOC gets out of the way. You can still make a very good case that these Olympics should not have been held, that the risks and the costs are too great, and that the IOC was driven by commercial motives. The athletes have saved the Olympics again. The IOC, saturated in excess, will at some point mess this up and pretend it’s the other way around and they have saved the athletes, but while the thrill of the sporting events is upon us, we have a period of grace from the IOC’s rituals of self-pleasuring.

What’s it like to be at Tokyo 2020 in 2021? From my bubble, I can only say that it feels different from any other sporting event, more difficult but also more powerful as a force for good. With so much else to worry about, you don’t have to overthink sport. Watching your country, or any country, strive to win an Olympic gold medal, your withered old emotions given new juice by athletes who get just this one chance every four years – it can still be an innocent kind of gloriousness. If you are riding those ups and downs across the ether from your living room to an empty stadium in Japan, well, that’s actually pretty cool. There are other people out there, and they’re all feeling much the same things as you are. Whether they are Simone Biles unable to do what she has done all her life, or Jessica Fox who has worked all of hers for one marvellous flash of reaching her potential, undergoing repeated disappointment and throwing up behind a tent and then just getting out there and doing it, they are, like us, only human. Except that they are faster, higher, stronger, and that’s pretty cool too.

Never miss a medal or great sporting moment with our Olympic update emailed daily. Sign up for our Sport newsletter here.