Home » Half of SEC basketball teams are coached by Black women: ‘It looks like what it’s supposed to look like’

Half of SEC basketball teams are coached by Black women: ‘It looks like what it’s supposed to look like’

KNOXVILLE, Tenn. — When Kentucky named Kyra Elzy  its women's basketball coachin December, she knew there would be big expectations.

She had been serving as the interim coach following Matthew Mitchell's sudden retirement in November due to personal health reasons. In his 13 years, he took the Wildcats to unprecedented levels of success, making the NCAA Tournament every year except for 2018 from 2010-19.

After Elzy led Kentucky to a 6-0 start and a top-10 ranking, athletics director Mitch Barnhart decided to remove the interim tag Dec. 14.

Sure, there would be pressure to keep Kentucky at a consistent level of competition, but Elzy also represents a shift in representation for collegiate athletics.

“I got into coaching originally because I wanted to inspire, impact and influence young women, and God has given me the platform to do so," Elzy said when she was hired. "There have been so many Black coaches to lead the way in order for me to be given this opportunity." 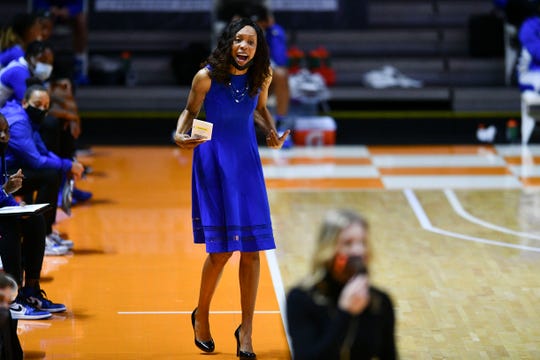 The other Black coaches in the SEC are at Auburn, Georgia, LSU, Ole Miss, Mississippi State and South Carolina. There are only six Black female coaches in the rest of the Power 5 conferences combined. Of those six, four have been hired in the past three years.

In that regard, the SEC is light years ahead.

And there's no better place to showcase the SEC's lead than the conference tournament, which begins Wednesday in Greenville, South Carolina.

South Carolina's Dawn Staley was the first of the current coaches to be hired in 2008. In 2011, LSU hired Nikki Fargas, and a year later, Terri Williams-Flournoy took over at Auburn, followed by Joni Taylor at Georgia in 2015.

Ole Miss' Yolett McPhee-McCuin was hired in 2018 and Mississippi State's Nikki McCray-Penson is in her first season.

Elzy and McCray-Penson played for legendary Tennessee coach Pat Summitt. Fargas, who grew up in Oak Ridge, was an assistant for Summitt.

28 STORIES IN 28 DAYS: John Thompson and John Chaney created legacy for Black college basketball coaches. Who will lead the next generation?

In Taylor's case, she's just the second full-time coach in Georgia's history, taking over after Andy Landers retired after 36 years.

"We're changing the narrative of how people see Black women," Taylor said during a roundtable discussion airing this week on the SEC Network to talk about the culture around the SEC. "Because the truth is, we have been the backbone for a long time, and the spotlight is just now coming on us."

Taylor was named the SEC's Coach of the Year on Tuesday after leading the Lady Bulldogs to an 18-5 record, including a 10-5 mark in conference play that resulted in a fourth-place finish in the SEC.

Staley has established herself as one of the top college coaches, regardless of sport or gender. In 2017, she led the Gamecocks to their first national title.

Georgia's Joni Taylor was named the SEC women's basketball coach of the year this week. (Photo: The Associated Press)

She was just the second Black coach to lead a women's basketball team to a national championship, following in the footsteps of Carolyn Peck, who led Purdue to the title in 1999.

Since 2013, South Carolina has finished no worse than second in the SEC standings, with four outright regular-season conference championships. Staley has guided the Gamecocks to the NCAA Tournament every year since 2011.

"The NCAA women's basketball has been comprised of a lot of older white women and some men," Staley said. "Now it's our turn, and it looks a lot different than what it looked like. It looks like what it's supposed to look like, where we have a diverse group of women.

"Fortunately for us, we converged on the SEC."

Representative leadership has especially been important in the past year, as events surrounding the death of George Floyd on May 25 in Minneapolis brought underlying conversations about discrimination and inequality back to the forefront of the American consciousness.

All seven SEC coaches have been vocal in their communities, and they've all allowed their players to participate in Black Lives Matter rallies, and other forms of peaceful protest.

Three days after McCray-Penson was hired at Mississippi State, she traveled  to Jackson, Mississippi, to speak about the removal of the state's flag, which was emblazoned with a Confederate battle emblem. 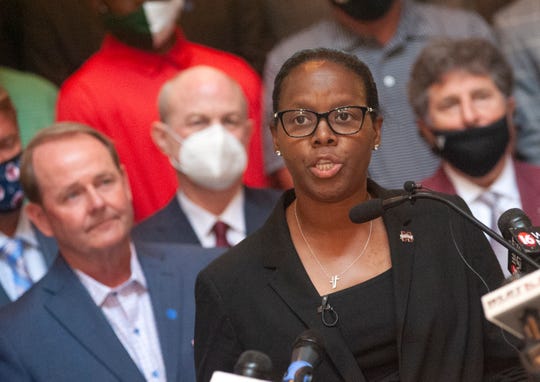 McPhee-McCuin was one of the first to raise Mississippi's new flag, which prominently features the Magnolia — the state's official flower.

"I'm in Mississippi, so I'm well aware of the struggles of being Black in the South," McPhee-McCuin said. "I hear about it every time that I recruit. People use it against me all the time.

College coaches also are tasked with protecting their players, an issue that's been made relevant recently after all but one member of Tennessee's team elected tokneel during the national anthem before a game against Arkansas on Jan. 7.

In the wake of that, the Lady Vols have faced staunch opposition from those outside the program, including some fans and Tennessee's Republican legislators.

"What I hope we're representing is a better tomorrow," Fargas said. "That we're leaving a pathway that allows our young daughters and sons to have it better than what we had it."