JAMES MADDISON is officially England's best creative midfielder – and is STILL being ignored by Gareth Southgate.

The Leicester midfielder, 25, has been in sensational form for the Foxes in recent seasons. 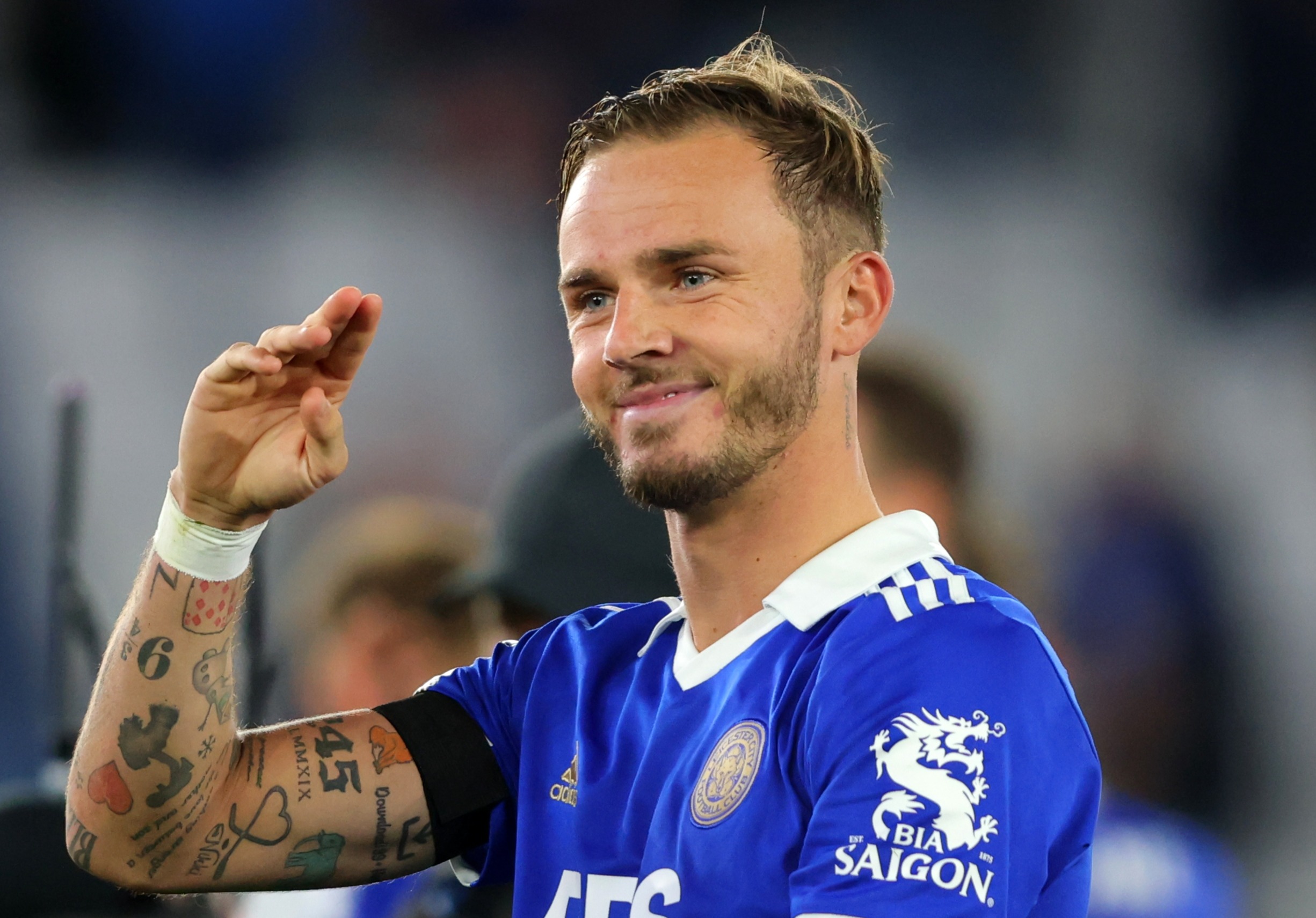 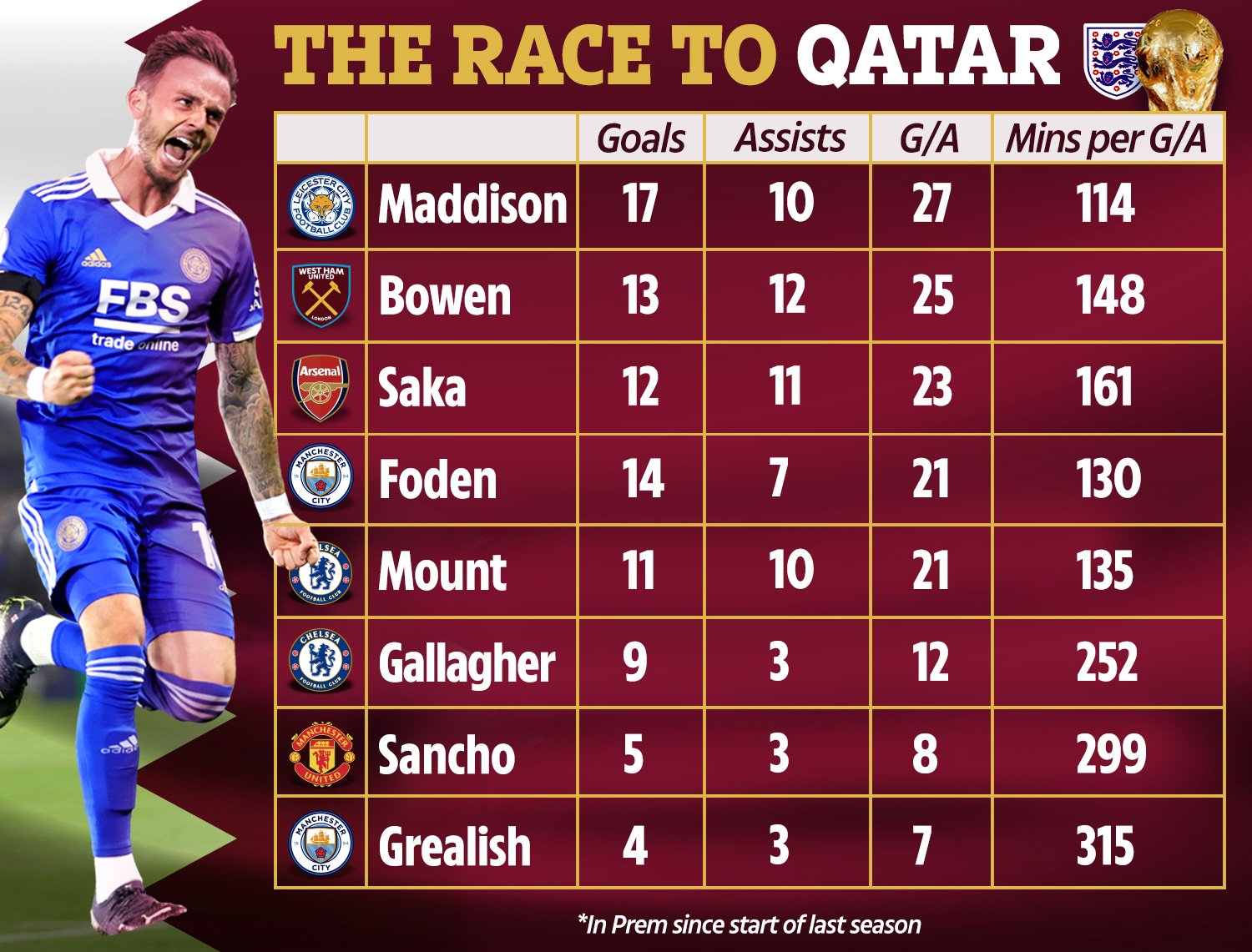 And he produced another spectacular performance with two goals and an assist as his side thrashed Nottingham Forest 4-0.

Maddison opened the scoring with a deflected effort and started the attack for Harvey Barnes' second.

Then the ex-Norwich ace whipped in a delicious free-kick for his fifth goal of the season and set up Patson Daka's cheeky flick as Leicester ran riot for their first win of the season.

And the Maddison display had his fans, manager and plenty of pundits calling for him to be included in Southgate's World Cup squad. 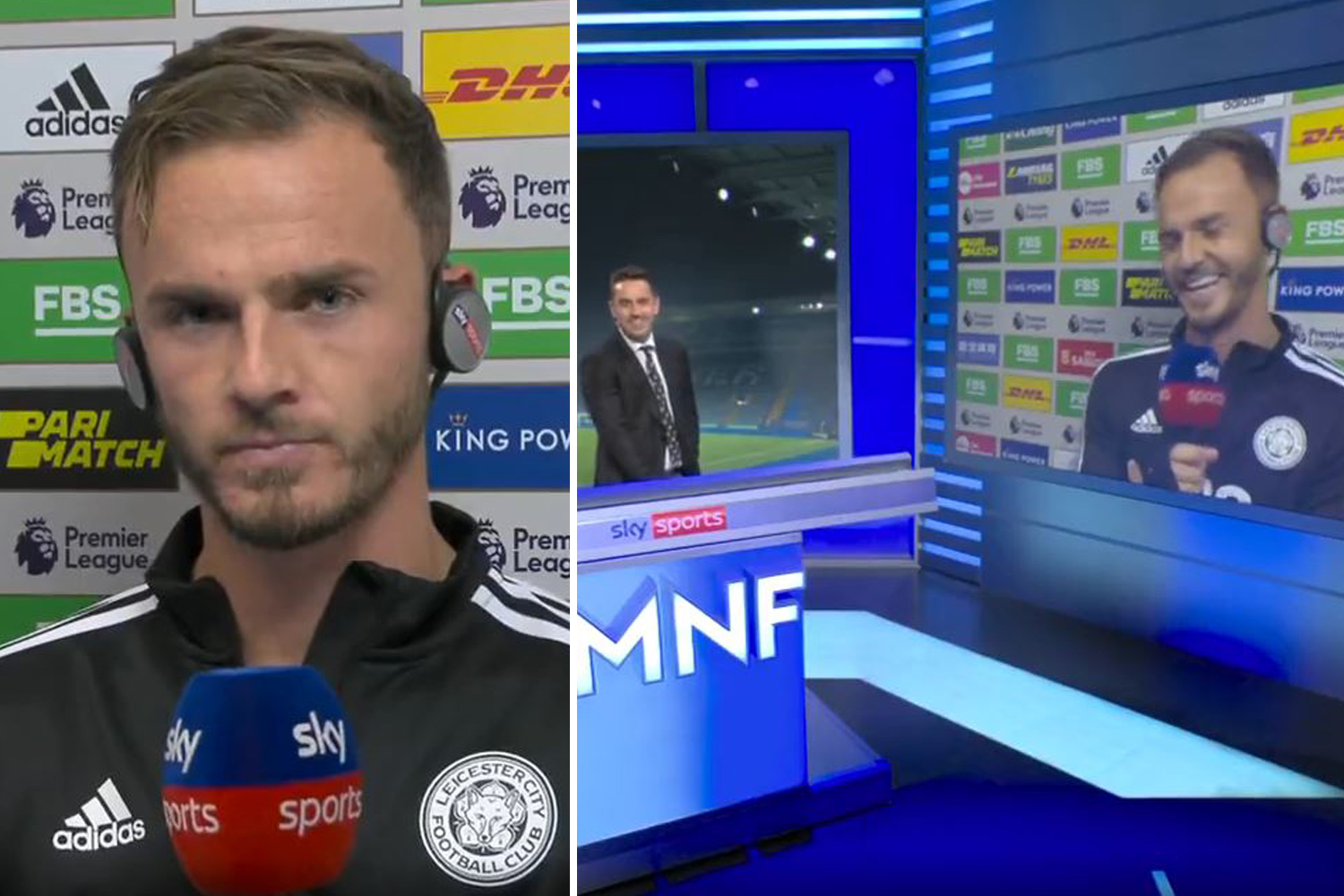 The playmaker and set-piece specialist, whose only senior Three Lions cap came against Montenegro in November 2019, has now racked up a whopping 27 Premier League goal involvements since the start of last season – and 37 in all competitions.

That 27 is made up of 17 goals and ten assists – with one every 114 minutes of action – and is second only behind England captain Harry Kane on 34.

Of those, a staggering 14 have come in his last 11 appearances dating back to May 11, the most of any player in the division except Erling Haaland's ridiculous 17 in eight.

And therefore it places Maddison ahead of his fellow attacking stars currently included by Southgate in the England squad.

Jarrod Bowen is second behind Maddison with 13 Premier League goals and 12 assists in the last 14 months for West Ham.

Bukayo Saka is next on the list with 23 involvements (12 goals and 11 assists) ahead of derby-day hat-trick hero Phil Foden and Mason Mount both on 21.

Conor Gallagher and Jadon Sancho both missed out on the September Nations League fixtures.

They come further back on 12 and eight respectively with Jack Grealish at the bottom of the table with seven – including just one goal and no assists this term.

Maddison spoke to Monday Night Football after his King Power exploits – and hit back at suggestions he would not be a "good traveller" in the squad.

The Foxes star said: "Yeah well I've never seen anything like that but that's almost questioning my personality and professionalism which is obviously quite insulting."

Maddison added: "It is hard to answer because you want to say the right thing and not the wrong thing, but [England] is an ambition of mine, a goal of mine.

"I am a football man, I watch international football and an opportunity at that level is something I desire and one I know I would have an impact at and one I hope will come my way at some point.

"I will keep working hard, I have got to have the mindset of forcing my way in because those players at the big clubs are in at the minute and they are top players, but I think there could be a space for me.

"So I will keep working hard and producing performances like that tonight and see where it leads me."

His boss Brendan Rodgers gave him a glowing review, gushing: "It is such a shame I think for the country and for the boy himself. You see his talent and his performance level for the last 18 months is clear.

"James is an absolutely brilliant player and I really hope he can somehow get into the team because if you want creativity, personality, he has improved the defensive side of his game, he can play in a couple of positions and for me, he is an absolutely outstanding player.

"He is up there, and I love Phil Foden, Mason Mount, those boys that play there. Jack Grealish is different as he is more from the side.

"But Madders can play in a number of positions to a high level. He showed that tonight." 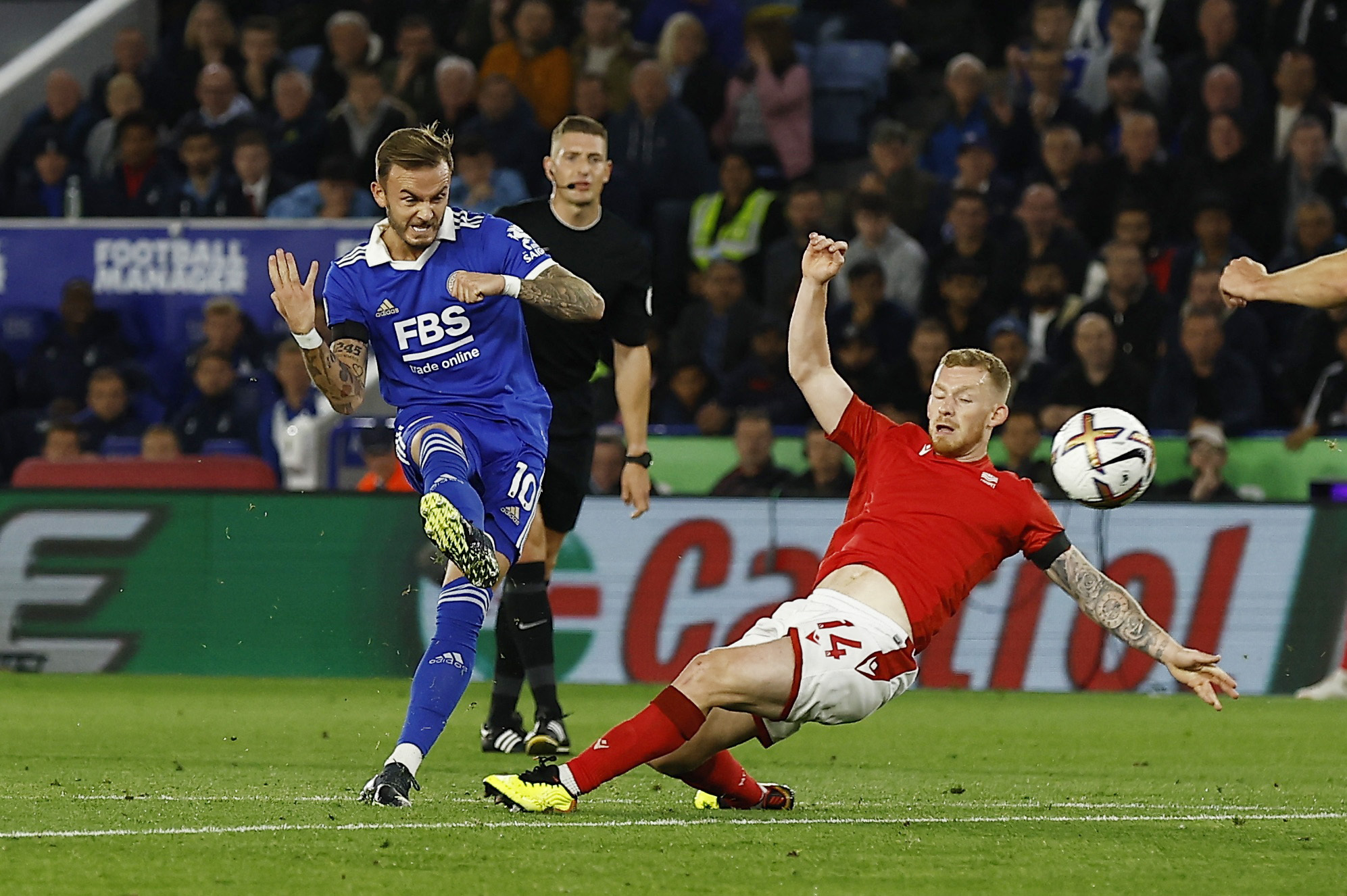 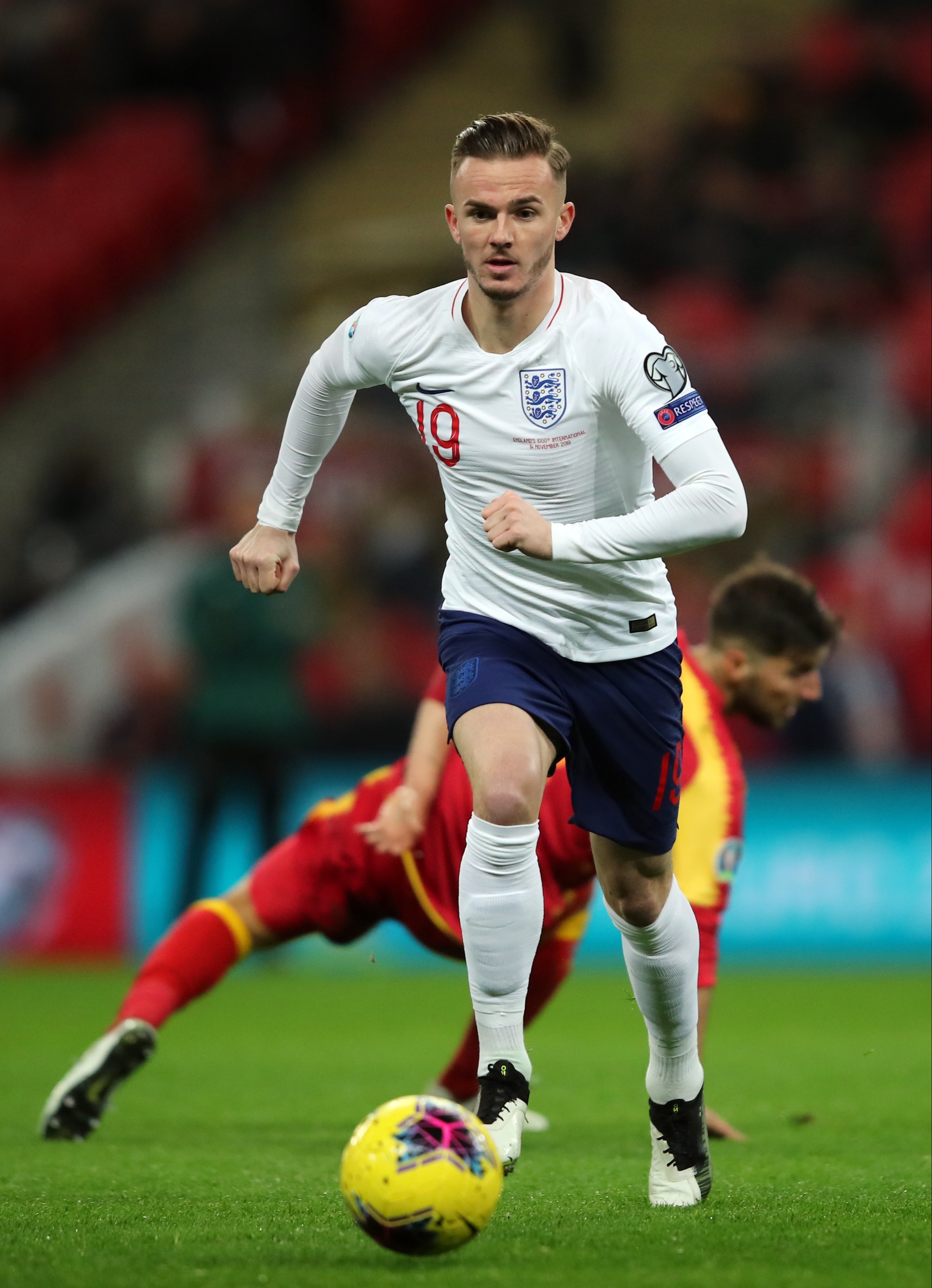