Home » ‘Not a sacrifice:’ Long bubble stay in Japan no worry for softballers

‘Not a sacrifice:’ Long bubble stay in Japan no worry for softballers

Australia’s softball squad will be among the first international athletes to arrive in Japan for the rescheduled Tokyo Olympics on Monday, with the team known as the Aussie Spirit opting to spend nearly four weeks in a hotel – save for daily training and practice matches – to prepare for their medal campaign.

The Spirit haven’t played since 2019 when they qualified for Tokyo and up until March this year had not even been in camp for 12 months. Outfielder Rachel Lack says the team is happy to abide by whatever rules they need to in order to prepare. 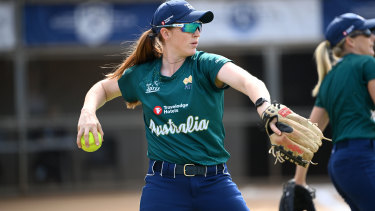 Rachel Lack is leaving for the Tokyo Olympics on Monday with the Australian softball team. Credit:Softball Australia

“There’s obviously the COVID protocols and we will be following that to a tee,” Lack, who is competing in her first Olympics, said. “I am not fussed wearing a mask or anything like that, I work at Bunnings so I have to wear it everyday at work anyway.

“We are being more cautious. We have our own wipes and sanitiser and our own snacks. It will be interesting seeing everyone on a plane even.”

The Australian softball team will travel to Japan with a squad of 23, plus seven support staff. That squad will be cut to 15 for the Olympics, but the 23 initial players will play 23 warm up matches against local sides before the Games begin.

Players and staff will live on one level of a hotel in Ota City, about 100 kilometres from Tokyo, all in single rooms. That one level will comprise living quarters and gym and communal facilities.

None of their players are based in Melbourne, luckily, and the travelling party was tested on Friday and can go to Japan on Monday if they get negative results.

Upon arrival they will quarantine for four days, but not before spending a few hours in the airport waiting for quick turnaround tests to come back negative.

Lack says going through the strict protocols is worth it.

“It’s not a sacrifice, it is a choice. I guess that’s how I have tried to change my own mindset about it and say ‘yeah I am choosing to go over there, I am choosing to train instead of missing family events and milestones’.

“This has been my dream for 10 plus years now so hopefully it will all be worth it once I get there.”

Softball and baseball are hugely popular in Japan and will be marquee events in Tokyo.

The majority of Japanese people, doctors and a newspaper that is the official partner of the Tokyo games don’t want the Olympics to go ahead.