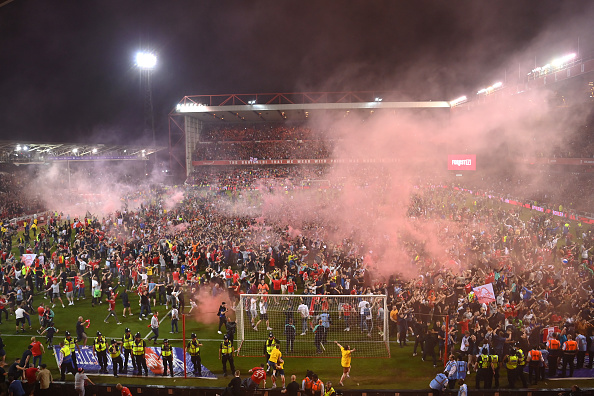 For the past five years, I have spent most Saturday’s watching a wall of screens showing EFL matches, and this season has been, by far, the worst for fan incursions.

Whether it’s supporters entering the field of play to join in goal celebrations, or worse, it has become commonplace.

That is what makes Tuesday’s sickening attack on Sheffield United’s Billy Sharp even harder to stomach, because you could see it coming a mile off.

Back in February, Accrington’s Harry Pell was waiting to take a penalty, only for a fan to run onto the pitch, boot the ball off the spot, then barge into him.

On Monday night, Luton’s James Bree, crouched down after his team’s defeat to Huddersfield, was slapped on the back of the head. The assistant referee read the tea leaves, sprinting like Usain Bolt across the field and down the tunnel before the final whistle blew. He knew. We all knew.

There are so many incidents I could cite and official figures I could quote that show clearly what happened to Sharp could have been avoided had those in charge pro-acted rather than reacted.

The white line should be seen as a sacred, invisible barrier, but it is now ignored on a weekly basis. While the fences are, thank goodness, a thing of the past, we must assume that they are still, metaphorically, there.

While noises are being made by governing bodies, with pledges to crack down on those who cross said line, they need to follow through with simple, clear penalties that will go a long way to nipping this in the bud. Strong deterrents are the only solution, and if they are not put in place now, without doubt, worse is yet to come.

Isolated incidents should result in lifetime stadium bans, while mass pitch invasions should equal an automatic points deduction. That’s severe, but the vast majority of fans wouldn’t dream of entering the field of play if that was the case.

Stay in the stands, kiss your mates, hug a sweaty stranger and stay the hell off the pitch.

The other white line that fuels football’s feckery is cocaine. I applaud the news yesterday those caught with the marching powder could be given their marching orders, but please enforce this at every given opportunity.

And before anybody says it, this is not a reflection of society as a whole. Cocaine use, research shows, is almost three times more prevalent inside football grounds than outside.

Also, let’s not denounce those who bring shame on the sport as ‘not real fans’. I’ve done this before and I was wrong. That’s simply an excuse to wash our hands of the problem. They buy the ticket, they sing the songs and they follow the team. They are fans.

Instead, let’s acknowledge them as a collective cancer, and call on those who run football to take the appropriate action.

Another factor fuelling this problem is social media and the search for likes. Watch back footage of recent flashpoints and you will see camera phones everywhere.

For many it is just capturing the jubilation, but for some it’s actively sinister. Whether it goes on Instagram, Facebook or into the WhatsApp group with likeminded ‘lads’, this is clearly part of the motivation to step over the barrier.

We’ve also seen several incidents of fans running onto the pitch, during games, to take a selfie with a player. What happens when it’s not a phone in the hand of that pitch invader? Shall we just wait until that happens, or take proper measures now? This is an issue of protection, and it is so glaringly not even close to being adequate.

Players also have a part to play in this, to not get involved and to not stoke the flames. Celebrate your goal with gusto but unless you’ve bought a ticket, act your age and step away from the stands.

As for stewarding and policing, there are some who want to see battalions drafted into grounds, but why should the rest of the public have to pay more to stop grown adults behaving like idiots?

This is not about red, blue, white or green. It is not an attack on your entire club. There’s no need to point out that many fans would not dare indulge in such vile behaviour.

Yes, it was a Forest fan who attacked Billy Sharp, but it was a Leicester supporter who assaulted Forest’s Keinan Davis, Djed Spence and Brennan Johnson after Joe Worrall scored earlier this season.

This is all our problem, and it’s time to shun, ban and expose the cokeheads and ****heads. The fact they are filming it should make that process a whole lot easier.